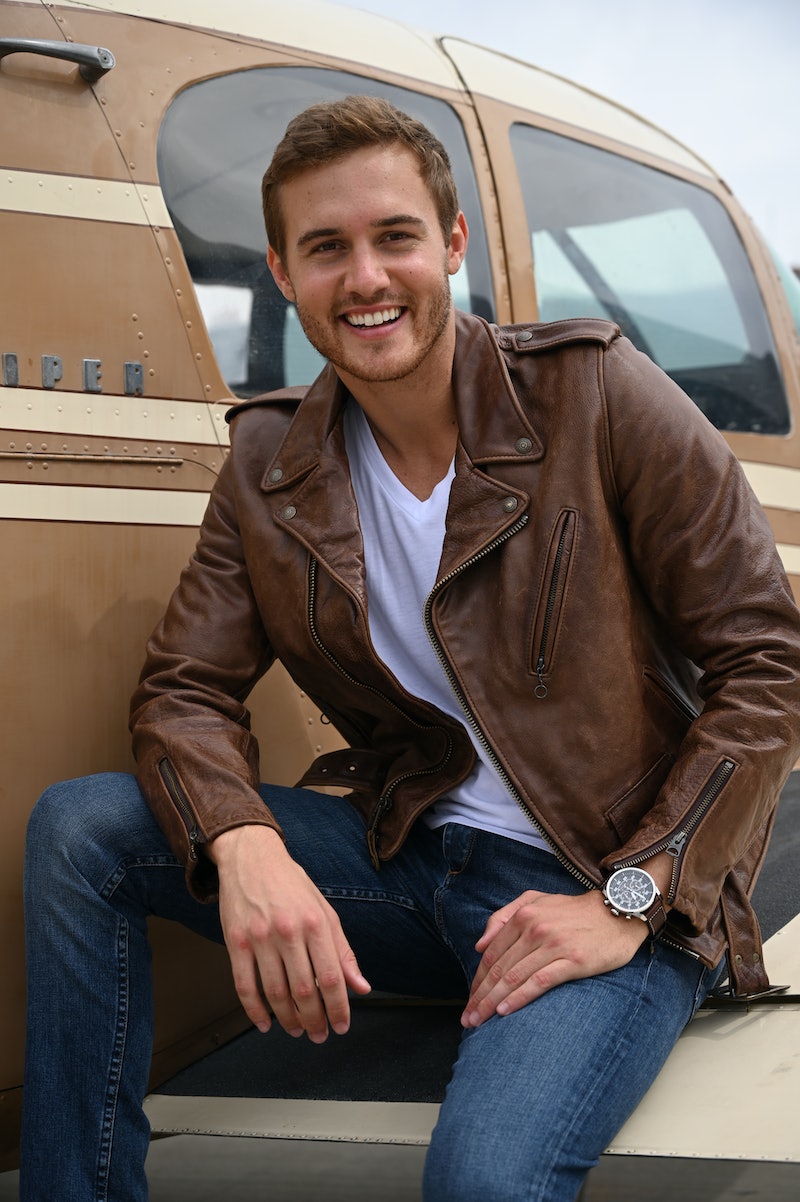 Pilot Pete's in for a bumpy landing, and he's not afraid to let the world know just how hard the end of his season of The Bachelor hit him. In a new interview with Glamour, Peter Weber said filming The Bachelor finale was the hardest week of his life — and he swears his proclamation has nothing to do with hyping up the finale, and everything to do with whatever curve ball this season is about to throw at him. Viewers got a peek at what goes down in the final episode during the premiere, and Peter promised that the moment host Chris Harrison delivers some mysterious shocking news is not "overproduced."

The premiere included a preview of what's to come in Season 24 that involved Harrison telling Peter, "There's something I just found out. All of us just found out. I'm not sure how all this ends, so I just wanted to give you a heads-up." The Bachelor responds that this is "the last thing I needed to hear." What "this" is will remain a mystery until the end of the season, but Peter wants to make one thing clear: the ending is going to surprise fans, and maybe not in a good way.

"I keep telling people that last week was the hardest week of my life, and it didn’t stop until the very end," he told Glamour. "That's not like an 'Oh, let's tease this and have it be an 'Eh? That's all?' No. It's not overproduced at all. I promise you."

As if that doesn't sound ominous enough, Harrison is going all in and declaring the end of Peter's season "gut-wrenching." In a new interview with People, the host said, "This is very dramatic, but in a very different way than, say, Colton's season, whereas there was this crazy feat of athleticism where he jumped the fence, and Hannah's was, obviously the twist at the end of hers with Jed and what happened. This is in a more emotional, gut-wrenching way."

Whatever happens with Peter is not only emotional, but according to the Bachelor himself, it's also spoiler-proof. "I’m very confident that no one is going to be able to spoil it," Peter told The Hollywood Reporter earlier this month. "There's a reason I believe that, and obviously can't say it otherwise it gives it away. I'm very confident that Reality Steve and all of these people, they're not going to find out what happens — there’s no way they’re going to find out."

Past seasons of The Bachelor and The Bachelorette have seen their endings spoiled on the internet long before they aired, but Peter's confidence has some fans wondering if perhaps the reason his final rose moment can't be spoiled is because it hasn't happened yet. When Glamour asked if there's still more of his story to be filmed, the star declined to say. One thing Peter does promise fans is that he's happy now, even if his season is going to be a wild ride.

"I couldn't have expected it to work the way it did, but I’m happy with where I’m at right now," he told the outlet. Whether or not he's happily engaged after his "gut-wrenching" season remains to be seen.