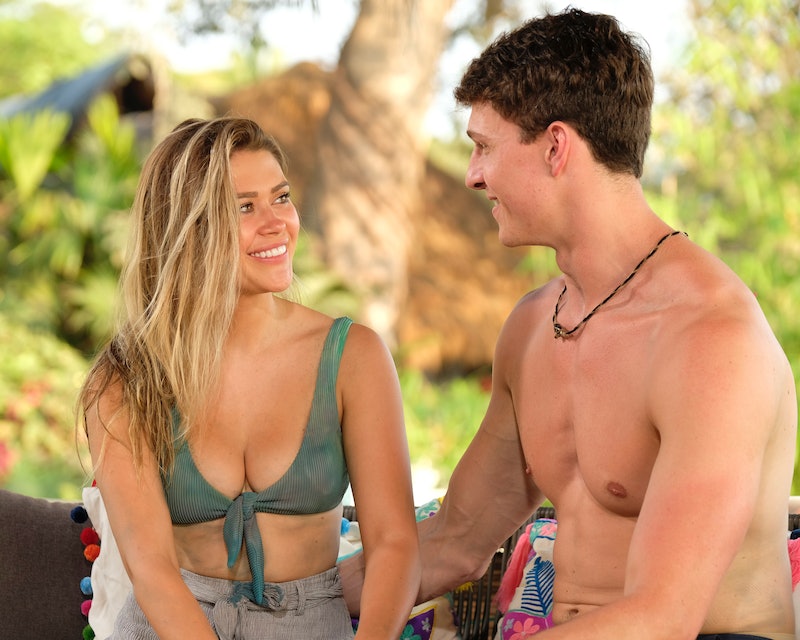 Perhaps the best thing about Bachelor In Paradise is that, if you get dumped or decide you don't like any of the men or women on the show, someone new is guaranteed to walk down the steps at any moment. It could be another person you're completely uninterested in, or it could be someone with the potential to totally turn your experience around. Such was the case for Caelynn, who got dumped by Dean (on her birthday, no less), only for Connor S. to swoop in and put a smile back on her face. Unfortunately, there isn't a lot of evidence that Caelynn and Connor are still dating after BiP, but that doesn't necessarily mean they're not together.

Contestants that go on strange dates seem to bond pretty quickly, which could be a sign these two will last long-term. Do you remember the whole chewing-a-hot-pepper-and-kissing-to-break-a-record date that Carly and Evan had way, way back on Bachelor In Paradise Season 3? It was disgusting (there was way too much saliva), but it really did something for their relationship. Cut to today, and they're married with kids.

Maybe this will be true for Connor and Caelynn too, because that paint-with-your-body date they went on during Week 4 was just weird enough to be something people could talk about for years to come. If an off-color (pun intended) date is a harbinger of BiP success, Connor and Caelynn are off to a good start. There's that pesky problem of Kristina also gunning for Connor and saying that gross thing about Caelynn getting her sloppy seconds (ugh), but since Connor picked Caelynn to go on the date, it seems like that's where his focus is for now.

Except… there's literally nothing to suggest they're dating after the show. The last BiP-related post on Caelynn's Instagram is a picture of her kissing Dean, which is probably not what Connor would want to be seeing her posting if they were together now. But perhaps after her history with Blake got aired out so publicly, Caelynn is keeping things close to the vest. Or, you know, she's just trying to throw everyone off the scent.

Connor's Instagram isn't any help either. He doesn't post much to begin with, and has had less than 15 posts since he announced he was going to be on Hannah's season of The Bachelorette back in May. Compared to other people in the Bachelor franchise, that's nothing. He has pics of his date with Caelynn, but the caption just says "I'm baaaaaaaaaack." Not much of a giveaway.

Maybe Connor and Caelynn were just feeling each other because they were at a wedding and everything is romantic at a wedding. Or maybe they instantly connected and have been inseparable ever since. The fact of the matter is that if there are clues that Connor and Caelynn are still seeing each other, they're not coming directly from the source. Alas, we'll just have to wait until Bachelor In Paradise Season 6 is over to see where they stand now.

More like this
All The Clues Zach & Christina Are Together After 'The Bachelor'
By Grace Wehniainen
All The Clues Clint & Gina Aren’t Still Together After 'MAFS' Season 16
By Brad Witter
Zach Addressed His "Boring Bachelor Energy" After His Group Date With Latto
By Grace Wehniainen
Tahzjuan Took A Cruise With These Bachelor Nation Alums After Visiting Zach's Season
By Kayla Blanton and Grace Wehniainen
Get Even More From Bustle — Sign Up For The Newsletter
From hair trends to relationship advice, our daily newsletter has everything you need to sound like a person who’s on TikTok, even if you aren’t.