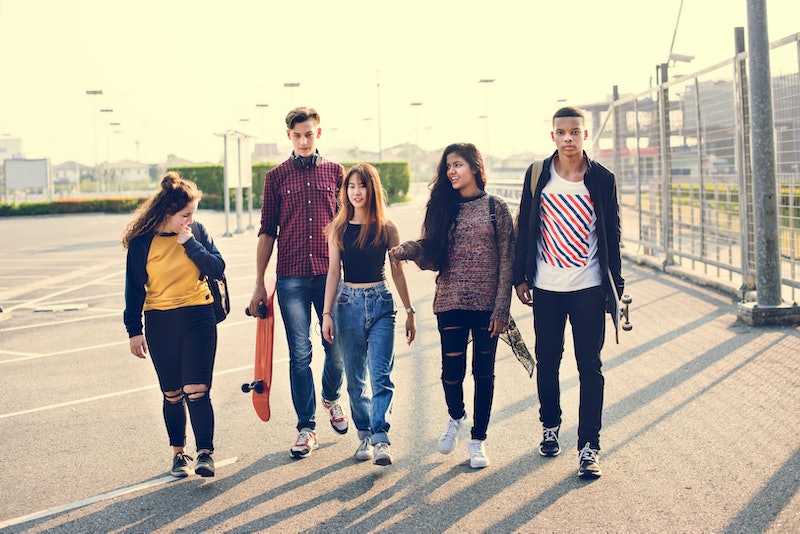 Consent is the foundational aspect of a healthy sexual exchange, but it's a concept that's unfortunately, and dangerously, misunderstood. While good sex education in school can provide a comprehensive picture of consent, a new Bustle Digital Group survey conducted in partnership with Pollfish and She's the First shows that young people who identify as women do not believe this education is readily available to them. And interestingly, despite not receiving formal education around consent, young women still believe they understand how to give and receive it.

The survey asked 2,000 girls in the U.S. between the ages of 14 and 22 about their experiences with issues like cyberbullying and consent. While 94.6% of the group polled felt as though they understood how to give and ask for consent, and around 65% of the group believed their peers understood the importance of doing so, the majority found that the sexual education programs at their school ranged from either not effective to very ineffective. Education proved to be, among the group, the most important issue in their lives at this point, suggesting that improved sex education at school could make a very impactful difference in their lives.

Additional questions in the survey looked into how online behaviors factored into conversations around consent. When asked if anyone had ever sent an explicit and unsolicited picture to those polled online, for example, 64.1% of the surveyed group said they had indeed received these types of pictures. Though most of those polled claimed to understand how to give and ask for consent, it seems that unsolicited pictures did not fit in their definition of what constitutes crossing boundaries.

Previous research has illustrated there is confusion around the meaning of consent and the types of communication it takes to give and receive it. A survey done by Planned Parenthood of 2,012 adults, between the ages of 18 and 95 in 2015 revealed that there are "divergent" views of what constitutes sexual consent and sexual assault, particularly when people are intoxicated. They also found that in general, women had a more comprehensive view of consensual sexual activities than did men.

Parents who were surveyed by Planned Parenthood reported that they generally spoke more comprehensively to their daughters about how to say no to sexual activity and how to access resources around sexual assault. In addition to that, only a third of people reported being taught anything related to consent, sexual assault, or having healthy relationships during middle or high school.

What Consent Is — And Isn't

According to Planned Parenthood, on a basic level, "consent means affirmative, conscious, and voluntary agreement to engage in sexual activity." Planned Parenthood also points out that there are varying beliefs about which behaviors do and do not communicate consent — and this becomes especially confusing to people when substances and intoxication is involved.

The Rape, Abuse & Incest National Network (RAINN) offers examples of consent on their website, describing that while consent doesn’t have to be verbal, it can be a very helpful way to make sure you are respecting boundaries as you move along in your sexual activities. Communicating consent can mean asking if it's OK to shift the "type or degree" of sexual activity, or making affirmative statements. Physical cues, like nodding, are also consent cues.

Actions that do not fall under the definition of consent, are things like assuming you can engage in a sexual act because you’ve done it before, or assuming someone is interested in sex because of kissing, flirting, or wearing particular types of clothing.

The often conflicting and confused understanding of consent and overall sexual health can be connected to what is required and offered in schools. According to National Conference of State Legislatures, as of March 1, 2016, only 24 states and the District of Columbia require public schools to teach sex education, and only 20 states require that this education must be medically, factually, or technically accurate.

Sex educator, and leading LGBT expert Kryss Shane tells Bustle that when teaching consent in schools, the most basic explanation can be as simple as saying, "unless it's an emphatic yes for both you and your partner, it's an absolute no."

Shane says another particularly helpful tactic is pointing out the ways in which music and movies gets consent wrong.

"It can help youth identify how what they see and may emulate is not what to do," Shane says. "It may also be helpful to discuss this regarding pornography, as the consent discussions rarely happen on camera but most youth view pornography and use it as a way they learn about sex."

There also must be recognition that individuals may not identify as the same gender as their genitalia. This can be a discussion tied both to the mechanics and precautions of sex and to the recognition that this is an important piece of understanding your own and your partner's sexuality.

"Currently, everything focuses on male/female sex which does not include a significant number of people, leaving everyone ignorant to the similarities and differences they may need to know to have safe and consensual sex," Shane says.

Discussing pleasure is also important, especially for those with vulvas, Shane says, and finally, it is necessary to discuss the emotional connection that many feel when they engage in any sexual activity.

"This helps youth to understand that the consent is not simply physical but also that all parties must be in agreement to build or risk building that emotional bond which may occur during sexual intimacy," Shane says.

By making sex education inclusive, consent-based, and by highlighting all of the ways in which sex may impact the body and mind, teens can make informed decisions and they can share this information with peers so that knowledge comes from this foundation, Shane says.

Dorian Solot, a speaker who teaches about consent and healthy sexuality at high schools and colleges around the country, is currently working on revising a national sexuality education curriculum for 5 and 6 year olds that includes age-appropriate "foundations of consent," called Our Whole Lives. Solot tells Bustle that consent is so much more than "yes means yes" and "no means no."

"[People] need to understand that consent isn't just about intercourse, but all kinds of touching and physical contact," Solot says. "Many people don't realize consent applies to oral sex. Or that people have the right to change their minds, that consent can be withdrawn at any time."

Solot says that people also often think that if they're not sexually active, consent doesn't apply to them, but that's not true.

"Consent is about holding hands, a kiss, sitting on someone's lap at a party, a text, a blow job," Solot says. And consent certainly extends to the online world. "Consent applies to sexting, even sharing nude photos or videos without the consent of the person in the videos is considered sexual exploitation. And when minors are involved, it can be considered child pornography — the stakes get really high, really fast."

Solot says people need practice asking consent, giving consent, and not giving consent. The students she works with often tell Solot that they don't ask for consent because it feels awkward, or because they're afraid they'll get a "no" if they do ask.

In comprehensive sex education, Solot says, one of the most valuable things to do with students is give them the chance to role-play, to try out different ways of communicating in sticky, real-life scenarios.

"Watching their peers try different ways of communicating, learning how to talk about it in ways that don't feel awkward — that's the magic potion that transforms their relationship," Solot says. In depth and nuanced conversations are the ways that the different details and dynamics about consent can get communicated with each other.

For example, Solot says, students are often surprised to realize that if a person has had too much to drink, they can't give consent.

"When I explain this to college students, I see the shock on their faces — many of them have never been taught that sex with a person who [is drunk] is sexual assault," Solot says. "A person who's slurring and stumbling cannot give informed consent."

Excellent consent education begins long before youth are sexually active, Solot says, and sex education and consent is a topic we should be addressing in kindergarten and early elementary school. It would center around reading body language and facial expressions, and respectfully communicating and receiving boundaries.

The more we talk about consent, the better. Seek out information from in-depth sources — no matter how educated you believe yourself to be — and share it.