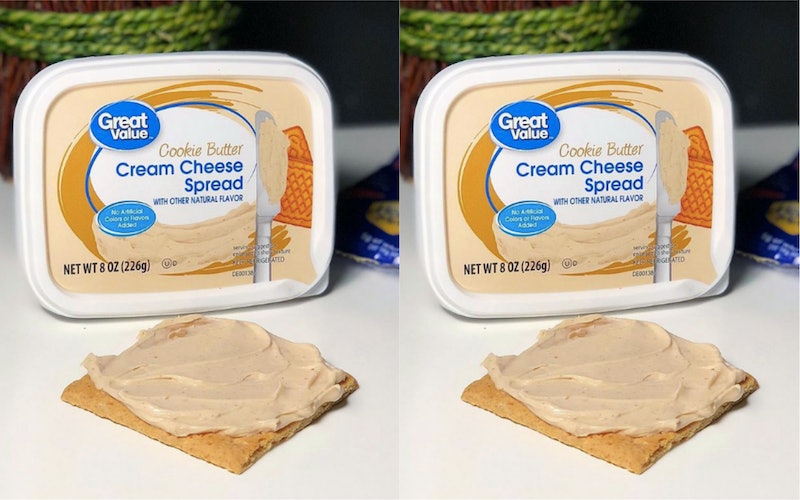 And today in Things I Can’t Wait To Devour At Breakfast Tomorrow, we have this: Walmart makes Cookie Butter cream cheese now. It seems to be a recent release; it’s only begun appearing on the internet over roughly the past week and a half — and, indeed, it’s not even listed on Walmart’s website yet. But you’d better believe I’m going to be hunting down a tub of this stuff as soon as possible, because, I mean… cookie butter cream cheese. Bagels never had it so good.

To be fair, the idea of combining cookie butter — the sweet, can’t-get-enough-of-it spread made by grinding up Belgian Speculoos cookies with a few other ingredients — with cream cheese isn’t new; Trader Joe’s made waves in 2015 when it launched its own blend of the two spreads, because, well… it’s delicious. But with both Speculoos and cookie butter becoming more and more mainstream, it’s only to be expected that a few other competitors might start to enter the ring — like, for example, Walmart.

Wisconsin-based food Instagrammer Candyhunting seems to be among the first — if not the first — to bring Walmart’s Cookie Butter cream cheese to the attention of the internet. They posted a photo to their Instagram and Twitter pages on June 10 featuring four tubs of Walmart’s Great Value brand cream cheese stacked together: Chocolate Hazelnut, Cookie Butter, Honey Almond and Vanilla, and Blueberry and Lemon Zest. “Turns out Walmart has better flavors of cream cheese than Philadelphia,” the Instagrammer wrote; they continued, “Your move, @lovemyphilly,” tagging Philadelphia Cream Cheese’s own Instagram handle as a sort of challenge.

Although all the flavors sound pretty tasty, the Cookie Butter variety is the one that has since captured our collective attention. That’s probably to be expected; the internet does love a good cookie butter riff. Interestingly, though, when Candyhunting reviewed three of the flavors a little more than a week later, Cookie Butter didn’t rate as highly as I might have expected: It earned just a seven out of 10. “All three are great flavors, but if I had to pick a least favorite, it would be Cookie Butter,” the Instagrammer wrote. “While that caramelized cookie flavor is there, it is pretty subdued.”

The Blueberry and Lemon Zest and Chocolate Hazelnut flavors both scored better, coming in at eight out of 10 and 8.5 out of 10, respectively. About the former (which appears to be a limited edition offering, based on its label), wrote Candyhunting, “The addition of lemon zest to a traditional blueberry cream cheese adds a refreshing tang and brightness”; and about the latter… well, it was somewhat surprising: Candyhunting noted that it was their favorite, despite the fact that they’re not a huge fan of Nutella on its own. “This cream cheese, in my opinion, is better than Nutella,” said Candyhunting. “The flavor starts out more on the chocolate side, but it ends with a near pure hazelnut flavor.”

JunkBanter, however, had a more favorable review, calling Walmart’s option a “fierce competitor” against Trader Joe’s. Taste-wise, the Instagrammer described it as “a nice spiced Speculoos cookie flavor mellowed out by creamy, delicious cream cheese”; they added that there’s “plenty of flavor, but not so strong that you’d be afraid to pair with your normal cream cheese complements.” JunkBanter did admit that they’d only tried it on a graham cracker and straight-up (no shame in eating it right out of the tub), but that their “next move” was to put it on Maple French Toast English Muffins.

Side note: Maple French Toast English Muffins are a thing. Clearly, I must acquire them as soon as possible.

If you want to try Walmart’s Cookie Butter cream cheese, though, there’s a catch: It’s not available online, so you’ll have to go to an actual store to get it. I’d suggest using the

to find your nearest location and calling them up to ask if they have it in stock before making the trek all the way out there; that way, you can save yourself a trip if it’s not available. If you like to live dangerously, though, then by all means, just head on out without checking. You’ll either be delightfully surprised or bitterly disappointed on arrival — but maybe the unexpectedness is the point.

Either way, you can probably expect to spend no more than a few bucks on a tub. According to PopSugar, the prices of both the Honey Almond and Vanilla and Blueberry and Lemon Zest varieties cost around $2 apiece; the assumption is that the Cookie Butter cream cheese will cost around the same. However, the exact price might change depending on where you’re located — for example, I’m in Washington, D.C., and the in-store price listed for the Blueberry and Lemon Zest cream cheese in my area is only $1.52 right now. Your mileage may vary, is what I’m saying, but it’s pretty affordable regardless.

Now if you’ll excuse me, I have an errand to run.