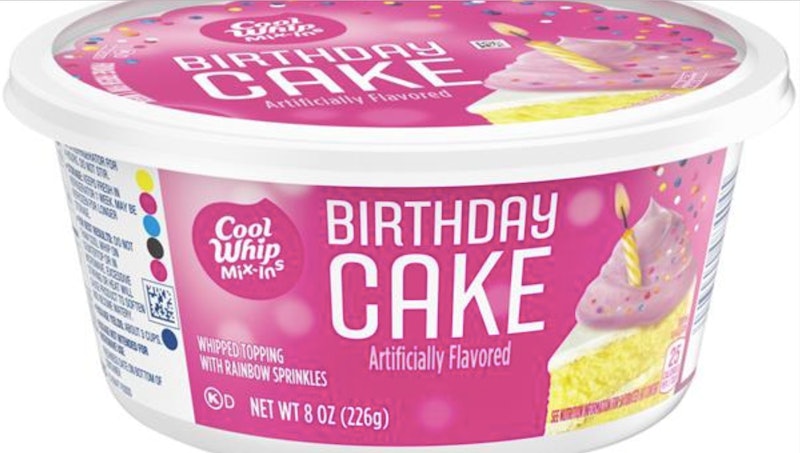 One of the best dessert phenomena of the 2010s is that birthday cake is finally getting its long-overdue time in the flavor spotlight. Birthday cake is the superior flavor of cake. It combines colorful sprinkles with vanilla cake batter to create a wondrous subtly rainbow confection. In the year 2019, when food is more inventive than one would have ever guessed, birthday cake is no longer just a variety of cake. Countless other treats have been transformed into birthday cake, and that list now include Birthday Cake Cool Whip Mix-Ins.

While Cool Whip hasn't formally announced the product, it's been spotted on shelves and confirmed on various grocery stores' online platforms, including Hy-Vee and Instacart. It was first brought to the attention of the internet by Instagrammers like @CandyHunting, who announced the forthcoming arrival of these pink tubs of sweet whipped topping. The accompanying caption read, "Coming to the freezer aisle very soon: New Birthday Cake Cool Whip Mix-Ins! Now, go be a rebel and put this on some pie." Having your cake (and pie) and eating it, too just became a likely possibility.

Another Instagram user, @TheJunkGoat, confirmed that the contents of these tubs are similarly pink in hue. @TheJunkGoat is also one of the few to have remarked on the actual taste of the sweet goo, saying it is "...not as pretty as you would think but not slacking on the flavor."

In the wonderful world of birthday cake-flavored desserts, there is no shortage of ways to satisfy your sweet tooth. The obvious choice is birthday cake, naturally. But, it is worth checking out how this flavor has been repurposed into an array of other treats.

Take for example a birthday cake breakfast staple. Waffle Waffle Birthday Cake have been available at Walmart since last fall, and are the perfect way to make it feel like you're eating dessert for breakfast. The product was reportedly inspired by Belgian Liège waffles, which are not the same as the American breakfast waffle. According to the New York Times, Liege waffles are yeasted, and take a fair amount of time for preparation. Their exterior is decidedly crunchy, and the addition of sugar makes it even taste a bit candied or caramelized. Luckily, when you just buy some of the Birthday Cake Waffle Waffles, the only effort you have to put into the consumption of them is figuring out whether or not you want to eat the entire box in one sitting.

Earlier this year, Keebler launched a line of birthday cake-adjacent Unicorn Fudge Stripe Cookies. The crisp base of the cookie is birthday cake-flavored, meaning it is vanilla with little rainbow-colored specks dispersed among the batter. The actual stripes of white fudge icing are said to possess a flavor of "magic cupcake." How these cookies differ from the eerily similar Birthday Cake fudge Stripe variety is hard to determine, but both are worth sampling.

The next time you're in the market for a nostalgic, colorful sweet treat, make an exceptional birthday cake concoction. Get a slice of birthday cake, top it with birthday cake ice cream, Birthday Cake Cool Whip Mix-Ins, and crumbled birthday cake cookies. Your tastebuds will thank you.