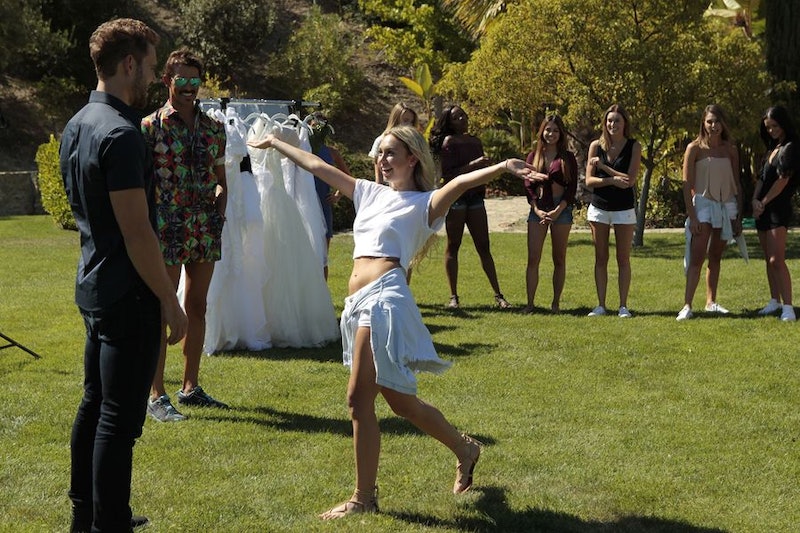 The Bachelor may have only been on for about a month so far, but I think I can be confident in saying that Corinne has never struck me as the rough-and-tumble type. And, on this week's episode, there was definitely some confirmation of that. During a trip to Nick's hometown on The Bachelor, Corinne couldn't stop complaining about a date on the farm. And, even though it was pretty hilarious, it definitely got to be a bit much.

Since Nick and his ladies were visiting Wisconsin, and, apparently, Wisconsin is made only of farms, a group date took place working on a farm for the day. Most of the women were obviously not enthused to shovel poop, but they at least made the best of it, laughing together about the situation. It seemed that, despite the less-than0desirable activities, everyone was having a pretty good time. Everyone except Corinne, that is, because she was busy whining. There wasn't a single thing she actually liked about the date, and she made that known.

Milking a cow? Nope. Even being on a farm, near animals and dirt? No way. Oh, and she was upset there was no sushi. ON A FARM, GUYS. ON A FARM.

In fact, Corinne even went so far as to say that this was the worst date she's ever been on, which was kind of rude. And Nick definitely noticed that she wasn't participating, because at one point he wanted to know where she was and caught her sitting by herself, outside of the barn, very clearly refusing to take part in what everybody else had no problem doing, even if it was a little gross.

I don't think this will earn her any favors with Nick, but she just made that date more entertaining to watch, so I have to give her that. And let's be real: Who actually likes scooping poop? Nobody. I, for one, would prefer to eat sushi. Maybe even cheese pasta, too.