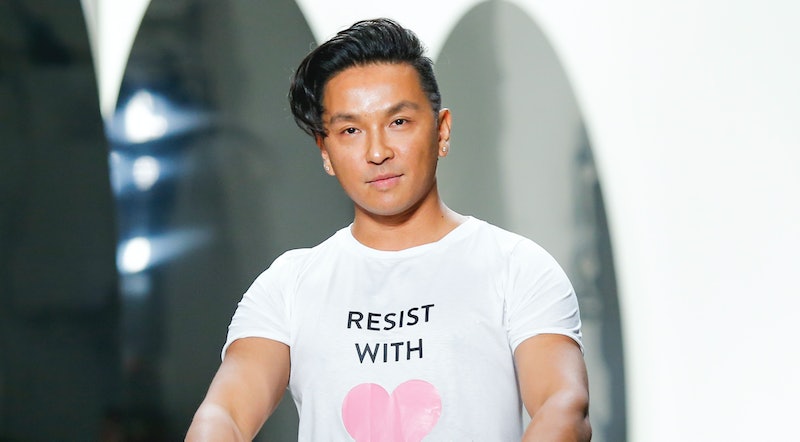 Ann Binlot, a writer and editor, was waiting for a show to start at Paris Fashion Week when she felt something tickle her throat. She couldn’t help it: She started coughing. Next to her, a white female editor was loudly complaining to the publicist about the crowds, how squeezed she felt, how the row couldn’t possibly fit another person. And then she said it: "You shouldn't pack in so many people, especially with things like coronavirus going around."

“I'm not sure if she was targeting me specifically, but it made me feel more self-conscious about my coughing,” Binlot recalls. And it wasn’t her only encounter with coronavirus-fueled racism. “I was walking down the street in Pigalle coughing, and I heard an older French man mutter, ‘Corona...,’ as I walked past.”

The COVID-19 outbreak, which originated in Wuhan, China, has claimed the lives of thousands of people from nearly 100,000 confirmed cases, but its rapid spread across the globe has also brought with it discrimination against Asians. In late February, a video clip of an elderly Asian man who was attacked in San Francisco went viral. Just a few days ago, Buzzfeed News reported that a Chinese student was beaten up in London. An acquaintance also posted on Facebook about a white man approaching her on a New York City subway platform and threatening to kill her if she didn’t leave the station because he assumed she had coronavirus.

These are far from one-off instances. CNN reported that the number of hate crimes tied to the virus were surging across the U.S, but it’s not just an American problem — it’s happening the world over. The attacks aren’t random and anonymous either. Paris Fashion Week proved that hate crimes can exist in a professional setting, surrounded by your peers. Binlot cites another example of someone who refused to get in the same elevator as an Asian publicist. A friend, the photographer William Yan, received accusatory “Do you have it?” stares during Fashion Week.

Binlot, for one, isn’t surprised by this kind of treatment. “Paris has a reputation for being a racist city, the fashion crowd is known for not being nice, and people are just rude in general,” she says. “I'm outraged. There are countless other things that can cause somebody to cough, including smoking, a cold, or if something is stuck in your throat. Plus, there are people who have coronavirus who aren't Asian.”

Tina Leung, a stylist who is a fixture in the front row at fashion shows, says she hasn’t felt any outward anti-Asian sentiments, but she does recall one moment that gave her pause. “There was one man — we were at a show and I went over to give him a kiss [on the cheek] and he’s like, ‘No, no,’ and he put his hands up and his boyfriend sheepishly laughed,” she says. “I understand, but then I found out that a friend of mine went up and hugged him, and it was totally fine. I don’t know if that [was because of coronavirus-inspired racism] or not, but who knows for sure.”

She also posted on her Instagram story about how a security guard stopped her before she entered Petit Palais, pointing to a sign about coronavirus and gesturing for her to read it before she could enter. Her non-Asian friend didn’t receive the same treatment.

Some influential figures took to Instagram stories to challenge this behavior. Photographer Adam Katz Sinding’s post went viral when he wrote, “A virus doesn’t see race or ethnicity...I cannot believe that so many people can just assume that because of one’s race that they are 'at risk' to be around. Unacceptable. You can quarantine a virus, but hate will spread beyond that wall.” Eva Chen, too, posted, “A helpful reminder that coronavirus is not an excuse to be racist against Asians. Times like these should foster more empathy for people, not less tolerance.”

Prabal Gurung also challenged his followers to stand up and support Asians — “Why aren’t you outraged? Why are you quiet?” he asked on his personal account — but he says his post was met with racist and hateful DMs.

“I’m a firm believer that if you’re profiting off of a minority, whether it be women, people of color, or the LGBTQ+ community, you also need to show up for them and speak out when their rights are being questioned, or they are being discriminated against,” he tells Bustle. “I had hoped that by this point in our history, we would be able to open up our hearts. While I do believe that the majority of the world has good intentions, these events have really brought the deep-rooted xenophobia that exists in this world to the forefront.”

That said, he does note that “people within the minority community, even outside the Asian community, have come together in solidarity.” There are impactful actions, he says, that individuals can take to help: Use your platform to promote unity, speak up and report it when you witness a discriminatory act, support Asian- or minority-owned small businesses.

“It’s important that everyone speaks up and actively seeks solutions to put an end to racist attacks against minority groups,” Gurung adds. “I want the world, not just the fashion community, to remember that the fight is against a virus — and not a group of people.”