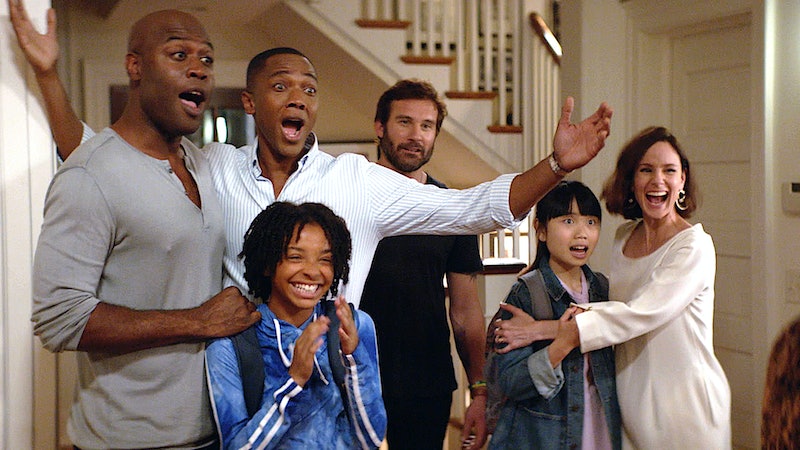 Emotional shows about relationships between relatives and chosen family grappling with shared loss have been a successful formula for NBC with their runaway hit This is Us. That logic would seem to suggest good news for NBC's freshman drama Council of Dads, which features an eclectic group of would-be father figures hand-picked by cancer-stricken dad Scott Perry and his wife Robin to help raise their five kids. But viewers wondering if Council of Dads will return for Season 2 should prepare themselves to say goodbye, as the July 2 season finale is officially the show's final episode.

Variety reported on June 25 that Council of Dads was not renewed for a second season, citing an unnamed source. The report was confirmed the next day by actor J. August Richards on his personal Instagram. "So that’s a series wrap on @nbccouncilofdads (aka the show has been cancelled)", he wrote, thanking his fellow cast members and the fans who supported the show.

Viewers paying attention to NBC's renewals might've seen the writing on the wall for the newbie show — ratings in the coveted 18-49 year old demographic dropped by 55.88% by the second episode and never really picked up again. More tellingly, Council of Dads wasn't part of NBC's fall lineup, announced June 16; the only returning freshman show slated is Zoey's Infinite Playlist. NBC has been on a canceling roll with newer shows, axing Fran Drescher's Indebted, Sunnyside, and Bluff City Law just ahead of Council of Dads' official cancellation.

The show followed a group of friends, the eponymous Council of Dads, brought together by married couple Robin and Scott Perry. Scott, who was diagnosed with cancer, worried about his five children growing up without father figures, so he and his wife asked their close friends to act in his stead. When Scott dies, his best friend Anthony, his A.A. sponsor Larry, and Robin's med school best friend Oliver team up to raise the family with Robin.

Council of Dads was inspired by the real-life story of Bruce Feiler, whose 2010 book of the same title inspired the show's creation. Feiler reached out to six men in his life to help raise his three daughters, and in a far happier turn, Feiler recovered from his cancer. Feiler had years of offers to tell his story in another medium, but it wasn't until "just days after I received a clean scan marking my 10-year cancerversary", as Feiler put it in the LA Times, that he got the offer that he'd finally say yes to. The show ends on a dramatic note on July 2, with final episode "Stormy Weather" finding the extended family amid a hurricane evacuation.