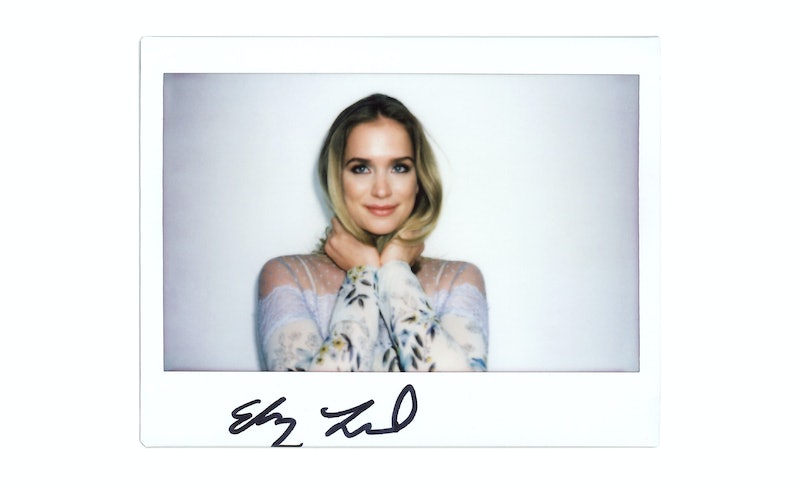 When celebrities hang out with Bustle writers, we want to give them the chance to leave their mark. Literally. So we hand them a pen, a piece of paper, a few questions, and ask them to get creative. This time, Countdown star Elizabeth Lail is leaving her mark in the Bustle Booth.

“I don’t need another app,” declares Elizabeth Lail, citing the digital clutter that plagues our phones. You'd probably be saying the same if you played a character who's unable to escape a haunting program that tells her how much time she has to live... right down to the minutes and seconds.

Out Oct. 25, Countdown is only the latest movie to unpack the side effects of heavy phone usage and the darker shades of technology. The plot centers around the repercussions of Quinn (Lail) downloading the trendy and macabre app, which may be causing — rather than just predicting — deaths. While her friends take comfort in the fact that they have several decades left, Quinn learns that she only has three days. There are jump scares and shades of the supernatural in the trailer, but Countdown also touches on our dependency on our phones and how that affects our interpersonal relationships.

Learning from Quinn's poor judgment, Lail doesn't let unhealthy screen habits into her personal life. Her current strategy involves a digital fast. Once a week, she'll ditch her phone completely — "while I do something outside, preferably," the actor says. "I can feel a weight lift, the moment [I'm] not carrying it around and not connected. It forces you to be present and live more in the unknown. You can’t Google something and get the answer immediately."

The Countdown app, however, is something you won't find Lail using any day of the week. While her castmates have tried out one that's inspired by the movie, she isn't interested. "I’m pretty sure one day, it could be [real]," she muses. "They’re going to measure your health, your genetics, and be like, ‘Well, you’re most likely to die this year.'" Even if it were actually based in science, Lail isn't sure the concept is for her. "For me, I would prefer [to live] just really day-by-day, moment to moment, in my truth as much as possible, and hope for the future," she says.

Of course, her new film isn't the first time one of Lail's characters has had her phone weaponized against her. In the hit thriller series You, she plays a graduate student who inspires the dangerously invasive infatuation of a bookshop manager. His subsequent stalking intrudes on the digital space as much as the physical. “Tell me about it," Lail laughs, when I point out the poor luck of the women she plays. "What is it about me?”

When the actor does use her phone, she's usually connecting with long-distance family and using her social media for activism. Though she describes social media as something she's not particularly talented at, Lail makes room on her grid for much more than selfies and glam shots. She's currently working with The Lonely Whale Foundation, which seeks to protect our oceans, and has also advocated for the Climate Change Strike and the World Wildlife Fund. Still, Lail is eager to support more social and political causes. "Use me," she says, extending her arms wide. "Use me for your organization. Let me know what I can do.'"

Find out more about the Countdown star — including the Amanda Bynes movie she can't help but love — in her Bustle Booth questionnaire below.

More like this
'That '90s Show' Star Callie Haverda Got Advice From Mila Kunis & Ashton Kutcher
By Brad Witter
12 Years Ago, Austin Butler Manifested His Oscar Nom In This Disney Movie Scene
By Jake Viswanath
Here’s Everything Coming To & Leaving Netflix In February
By Jake Viswanath
North West Will Make Her Acting Debut Alongside Mom Kim Kardashian
By Radhika Menon
Get Even More From Bustle — Sign Up For The Newsletter