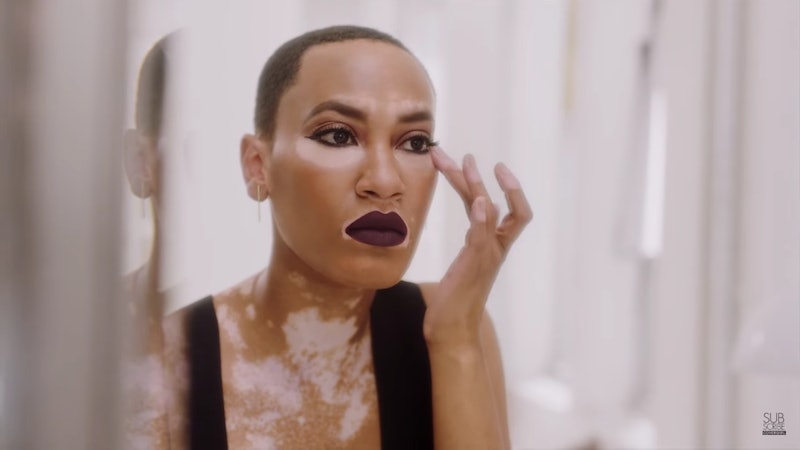 Beauty brands can often fall behind the times when it comes to diversity. From a lack of foundation shades to a lack of diverse representation, there's still work to be done. But one brand is doing its part to shake up the system. CoverGirl's latest ad features a model with vitiligo, and it's a win for the beauty industry and diversity.

Model Amy Deanna is CoverGirl's latest spokesperson, and not only does she bring a soft fierceness to the campaign, she's also an advocate for self-live and a champion for representation. The commercial in question is for the brand's #IAmWhatIMakeUp slogan, which features models of all skin tones, body types, and ages. So far, the campaign has included 69-year-old Maye Musk, Ayesha Curry, Issa Rae, and Katy Perry. Now, Amy Deanna is being added to the gorgeously diverse line-up.

In the commercial, Deanna can be seen applying the brand's TruBlend Foundation to her face. But instead of using the base to cover her vitiligo, she uses two different shades to perfect her skin and allow her vitiligo to show through. During the commercial, a voiceover says, "Why try to blend in, when you can choose to stand out?"

Amy Deanna's CoverGirl commercial marks the first that the brand has featured a model with vitiligo. It's important to note, that it wasn't to show if the foundation could cover Deanna's vitiligo. It was to show how to mix products to show off her skin.

Deanna spoke with People about her new roles as a CoverGirl, and in the interview, she speaks about the need for more representation in the beauty industry and a lack of diversity can be defeating, but her role is a step in the right direction.

"For there to be so many of us and so little representation, it’s truly disheartening," she said. "I work with CoverGirl; I’m a black woman; I have vitiligo. That is empowering."

She explains that growing up, she saw women like Queen Latifah modeling for CoverGirl, which inspired her. Now, she's getting to do the inspiring, and she's helping to fight back against unrealistic beauty standards.

"I’m thankful to take part in this. It’s surreal," she tells People. " I believe that inclusiveness will challenge unrealistic beauty standards within the beauty industry and in humanity."

Deanna's campaign does buck those beauty standards, but she's also a proponent of self-love regardless of those arbitrary rules around what is considered beautiful. In an interview with Adolescent, she described choosing to be happy with herself, and happy with the things that were reinforced as flaws.

"Whatever it was that I wasn't happy with, I had to remind myself that things don't determine if I am beautiful; I do," she told the website. "We as women are quick to give that power to others."

As for why Deanna was excited to work with CoverGirl, it goes back to her views on the beauty industry. According to People, she has long been using social media as a way to call for more inclusivity, but there's still work to be done. And she's happy to be doing it with the makeup brand.

"We have to be more inclusive. Diversity is important," she tells People. "Representation is important. Inclusivity is important—not just for people of different backgrounds and ethnicities, but also people of all sizes. That’s why I was so excited to partner with CoverGirl on this project.

"Beauty comes in all shapes, sizes, colors, etc. Let’s face it, together we are a mosaic—that in itself is beautiful. We should celebrate that."

Amy Deanna's CoverGirl commercial is hopefully just one in a growing list of diverse models for the brand. With Deanna now a member of the CoverGirl squad, you're sure to be seeing more of her and her inspiring activism. Thank the makeup gods for that.