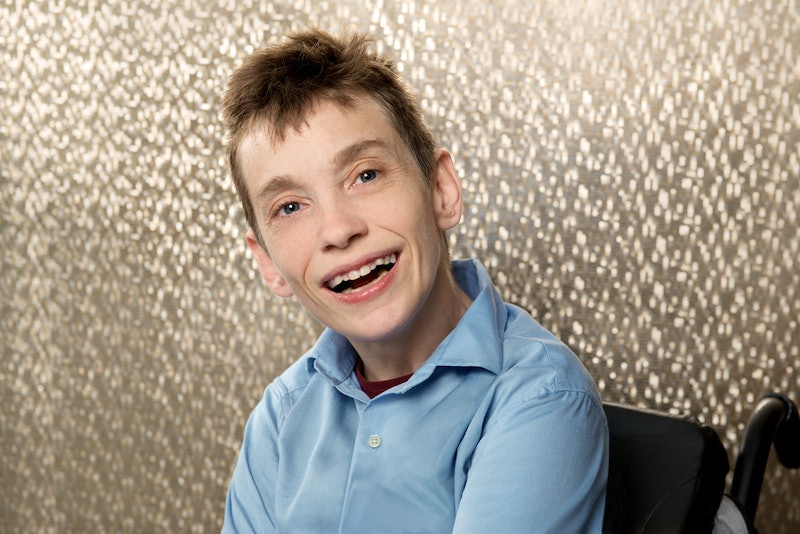 Like many teenagers, Eva Sweeney wanted to know about sex. But the birds-and-the-bees, condom-on-a-banana standard sex ed spiel wasn’t going to be enough. Sweeney has cerebral palsy, which means she uses a wheelchair to get around and a laser pointer with a letter board to communicate. She's also queer, which adds another layer to the whole sex-and-dating thing, one that teens never get enough information about. But after multiple calls to disability organizations asking for information about sex came up fruitless, she tells Bustle, she realized she was going to have to tackle the topic of sex and disability on her own.

In 2019 if you want to learn about something — say, sex for queer young people with disabilities — you can search for it and almost surely find resources. But back when Sweeney was first getting started in 2004, that wasn’t the case. Social media didn’t really exist yet, and we weren’t anywhere near the information saturation we see online today. So she had to turn to the one resource she had ready access to: herself.

“All of my initial information was basically my trials and errors with sex and disability,” Sweeney says. “For example, I bought seven vibrators before I figured out what one worked best for me.”

Those seven vibrators were the start of one part of Cripping Up Sex With Eva: The sex toy reviews. While most sex toy reviews talk about materials, vibrations, size, and the quickness to orgasm achieved by the reviewer, Sweeney’s reviews focus on how friendly the toy is for someone with a disability.

“I don’t talk about whether the toy can make me climax or not,” Sweeney says. “It is more about the overall design and accessibility of the toy. For example, ‘How is the handle? Is it really heavy? Are the buttons hard to press or confusing?’ and so on. This way people can decide for themselves whether the toy would work for them or not. Unfortunately, there is no ‘one toy to rule them all,’ in regards to accessible sex toys. Everyone is different!”

“This ranges from pulling their pants down, to handing them a sex toy, or turning the toy on and positioning it,” Sweeney says. “When you are set up, the person who is assisting you leaves the room to give you privacy, but still remains nearby or accessible in some way for when you are finished.”

Knowing that this could be a big ask for a lot of aides, Sweeney also gives advice on how to handle that conversation. “You should have this conversation in a straightforward manner,” Sweeney says. “Explain that you are not asking for sex — this is about your needs. Be clear about the process and let the person think about it if they need to. If they are not comfortable with helping you with this, you need to respect that.”

While Sweeney didn’t have anyone to turn to for answers when she was a teen, anyone can turn to Cripping Up Sex With Eva for sex toy reviews, personal consultations, her handbook, and Crip Q’s, where she answers anonymous questions about sex and disability. And any reader who wants to support her work can sign up for her Patreon or book her for a workshop. Because no one should go without accurate and helpful information about sex.