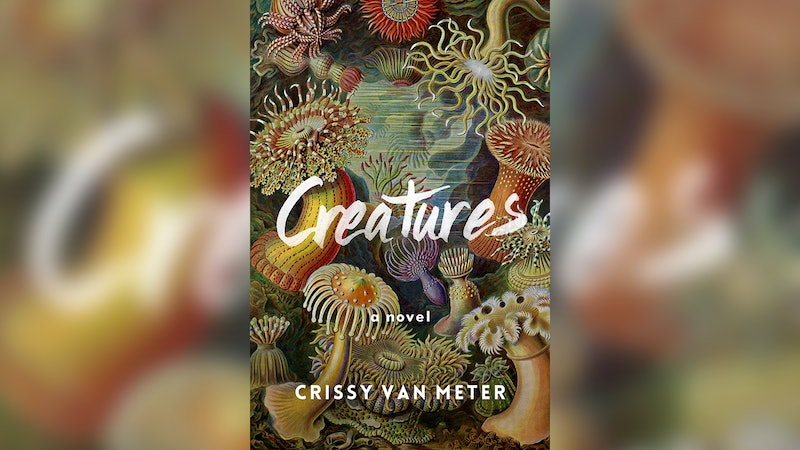 Next year is bringing with it plenty of fantastic debuts, and Bustle is happy to give you an exclusive look at one of them today. Crissy Van Meter's Creatures is a lyrical, literary debut that you'll want on your TBR when it comes to stores next winter. Creatures won't land on a bookshelf near you until Jan. 7, 2020, but it's available for pre-order today. Keep scrolling to start reading Crissy Van Meter's debut novel right here on Bustle.

Set on a fictional, fishing-focused island, Creatures centers on Evangeline, a woman on the brink of marriage, whose husband-to-be has not returned from a recent boating expedition. With the wedding scheduled for the next day, Evie grows anxious awaiting her fiancé's return, and moreso when her mother, whom she has not seen in years, shows up at her door. Creatures is a poetic and strange new novel that moves backward and forward through Evie's life, painting a portrait of the heroine's past and present, and bringing old secrets and wounds to light. The novel has already garnered advanced praise from Melissa Broder, author of The Pisces, and Leni Zumas, author of Bustle Book Club's May selection Red Clocks.

Crissy Van Meter's debut comes out Jan. 7, but you can start reading it today. Check out the exclusive sneak-peek below, and pre-order Creatures today from your favorite bookseller.

There is a dead whale. It rolls idly in the warm shallows of this island, among cartoonish sea animals with ten­tacles, suction cups, and goopy eyes. There are squawking birds leaking nearly colorless shit, and we are concerned with an unbearable odor and the must-be sharks circling nearby.

This whale is lodged in the half-moon of the bay, and she can't seem to drift past the reef, even with the water pushing out. Close enough that we can see her. We can smell her. We breathe her. She moves with the comings and goings of the tides, and her lifeless body is a black balloon on the hori­zon. The smell has seeped into this house and lingers in the curtains. Rancid stench sticks to the ends of my hair. In the night, there are sea voices — chewing into her carcass — and when I can't sleep, I can make out the blubber plucked by night beaks and mouths of darkness unknown. Some morn­ings, her dead eye has been opened wide, and others, she's capsized and looks like the hull of a boat.

There isn't time for this now.

I rush to the harbor, where men are heaving fish from boats to bloodstained docks and piling them in silvery mountains on top of crushed ice. It smells familiar. The air is wet and moves deep into the lungs, and today, I'm frantic. I ask about Liam's boat, if it has come back, if anyone has seen him.

"You seen that whale out there in the bay?" they keep asking.

"Storm's still out there, Evie, and we heard they're still trying to get around it," they say.

"You don't worry one minute," they say.

"We lost all radio contact last night. Happens all the time," they say.

He always comes back. I keep saying that. And everything always smells like fish here.

I'm used to guts, stink, men who drink, boats, island gossip, and sudden darkness that fills the sky. I know that storms sometimes appear unexpectedly, and I know that there are times when we have predicted them for years. I know the maze of floating docks covered in a slimy layer of raspberry-colored insides, and I know which fishermen work with efficient, tenacious speed. There is never time to waste. The men load a crate of fresh dead fish into my truck, and I pretend I'm not worried — that I'm an old seaman, too — that this weekend will be fine, that Liam will be back in time for our wedding, that I'll be able to gut, cut, and prep all this fish alone. He always comes back. I keep saying that. And everything always smells like fish here.

The sky is filled with gray clouds pissing rain, and as I get closer to home, I can see the outline of that rotten whale and the infinite outline of that infinite storm. I tell myself to stop thinking of the whale, to think of Liam instead, but there it is, right there.

Tires are slower in the mud, and my truck slips in the gravel driveway, and I can't lose this haul of fish, because what if the boats never come back? The most important thing now: get the tuna into the freezer. I say it out loud: Tuna to the freezer.

But there is my mother, standing on my porch. Holding her hand up with an awkward wave. It's been years. Her eyes are the same, dark and eager. I'm soaked, and she's dry. Then she points to the horizon, to warn me of the beached whale lingering on the reef, or to warn of darkness.

Today, I do not want to see my mother, because today, she will compare everything to this rotting whale. Our lives. Our sadness. Our dead.

My mother has a sensitive nose. She could be burned at the stake for this gift. She can smell pizza before a delivery guy gets out of the car. When I lost my virginity, she said she could smell it on me. She says she can still smell my father. All the things she can smell, they draw her to new places, and maybe it's her heightened senses that are the root of our problems. Sometimes she's near, sometimes she's not, and sometimes she says that she can smell when I need her by a tinge of smoke in the air. This dead-whale perfume is polluting the entire leeward side of Winter Island, and it's beginning to seep into the cracks of my skin. But it's not the worst thing to happen to us.

Today, I do not want to see my mother, because today, she will compare everything to this rotting whale. Our lives. Our sadness. Our dead. I haven't seen her in three years. Haven't heard her voice in two. And haven't received a letter in at least six months, but here she is, waving and pointing. Like she's the first to discover the body of a whale.

"Can you help me get the tuna into the freezer in the garage?" I ask.

"That's how you greet your mother?" she asks.

But I didn't know you were coming, I should have said. (And other things.)

"You must have known I'd be here for your wedding," she says.