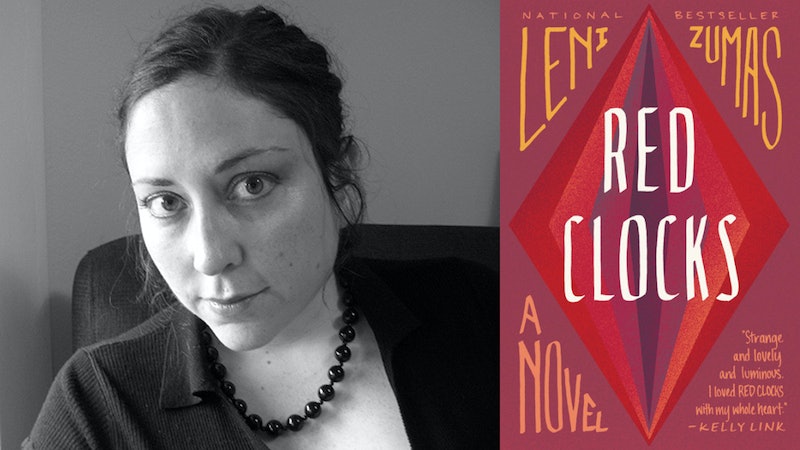 Each month, the Bustle Book Club asks an author to recommend a book they think everyone should read. In May, Little Fires Everywhere author Celeste Ng recommended Red Clocks by Leni Zumas. Follow along with the book club on Bustle and join the conversation on Goodreads.

In the first five months of 2019, five states — Georgia, Alabama, Kentucky, Mississippi, and Ohio — have moved to restrict abortion access. Amid this ongoing battle for reproductive rights, authors continue to use fiction to demonstrate just how bad things can get. One book that painfully illustrates the individual costs of restrictive legislation is Bustle Book Club's May selection, Red Clocks.

Zumas's novel follows five women, four of whom live in a near-future America where reproductive rights have been drastically curtailed: Abortion and in-vitro fertilization are illegal, single people cannot adopt children, and a Pink Wall separates America from Canada, ensuring that people cannot cross the border to secure a legal abortion. The women of Red Clocks are all affected by these laws in different ways, but one fact runs through all their stories: None of them have the right to choose their own paths.

"I wanted to imagine an ordinary, unspectacular version of what might happen in the wake of these new laws," author Leni Zumas tells Bustle in the Q&A below. "The characters are sort of just chugging along in their lives, when they realize — with growing horror — that their lives have changed. One of the superpowers of fiction is that it puts the reader inside the experience of a law’s consequences."

In the interview below, Leni Zumas talks to Bustle about how fiction can help readers understand reality, about the real-life experiences that inspired this novel, and what she hopes book clubs talk about when discussing her book:

Red Clocks begins with an epigraph from To The Lighthouse by Virginia Woolf: "For nothing was simply one thing. The other Lighthouse was true too." Why was this the quote you chose to set the stage for your novel?

Virginia Woolf’s books have been powerful inspirations for my own. I love her sentences and her mind. This line from To the Lighthouse is a reminder that all of us are complex, layered, contradictory beings, and that nobody — no body — should be reduced to a label, a prepackaged identity.

"Dealing with infertility was a profound education in how women’s bodies are pathologized and demonized when they don’t succeed as reproductive machines."

In the opening scene of the book, one of the protagonists undergoes a pelvic examination with a male gynecologist. It is, as these appointments can often be in real-life, uncomfortable. Why was this the scene that you wanted to open your novel with, and how does it speak to the broader themes of the book?

This is one of the most directly autobiographical scenes in the novel. Just like Dr. Kalbfleisch in Red Clocks, my fertility specialist once showed up to an appointment dressed as Slash from Guns ‘n Roses, complete with leather pants and mirrored sunglasses. (It was Halloween.) Ro’s adventures with fertility doctors, inseminations, sperm banks, and single-mother meetings are based on my own encounters with those things, which were sometimes funny and sometimes joyful and sometimes really, really awful. Dealing with infertility was a profound education in how women’s bodies are pathologized and demonized when they don’t succeed as reproductive machines. The novel is interested in looking at the ways people have tried (and still try) to define, dictate, restrict, naturalize, discipline, and legislate female identity.

Not only is abortion illegal in the novel, but a Pink Wall prevents people from traveling to Canada to terminate a pregnancy and single people are prohibited from adopting children. It’s extremely obvious that the laws are not meant as a pro-life measure but to punish and restrict the rights of people who want to have children on their own terms. In ideating this near-future dystopia of your novel, what did you want to say about very real present circumstances?

When I started writing the novel, in 2010, the rights to abortion and IVF were not under obvious threat in real-life America, as they are today. But having control over one’s own body, inside and out, is the most basic freedom I can imagine. To restrict that freedom — to deny a person’s bodily autonomy — creates a terrifying pressure that I wanted to explore.

"These aren’t developments I was anticipating when I wrote Red Clocks, but given the deeply entrenched misogyny in our culture, they shouldn’t surprise anyone."

Today in the United States it is virtually impossible for some women to get abortions. They don’t have the money to travel, they can’t take off work, they can’t afford childcare for the children they already have, there’s a 72-hour wait at the clinic, and there’s only one clinic in their state. And of course the lack of access disproportionately affects low-income women and women of color. Pregnancy is one of the most dangerous times, medically speaking, in a woman’s life. Serious (and permanent) health complications can arise — including death. Maternal mortality rates for black women in the U.S. are two and a half times worse than the rates for white women, and of anywhere in the so-called developed world, they’re at the bottom. Yet we somehow have money to spend on a space army? To build a border wall?

Now that [Neil] Gorsuch and Kavanaugh are on the Supreme Court, it’s entirely possible that Roe v. Wade will be reversed. Just this week, the Alabama House passed a bill that would criminalize abortion at any stage of pregnancy, unless the woman’s life was in danger. No exceptions for rape or incest. A doctor could go to prison for up to 99 years. These aren’t developments I was anticipating when I wrote Red Clocks, but given the deeply entrenched misogyny in our culture, they shouldn’t surprise anyone.

The inequalities of this book are systemic, and yet two of the characters — Ro, who is single and having difficulties getting pregnant, and Susan, who has two children — both nitpick at each other. They are jealous of each other’s lives and critical of each other’s decisions. Why was that important for you to show in your story?

I wanted to represent a friendship corroded by competitiveness and judgment, which are themselves products of the culture at large. A lot of women have been taught (whether explicitly or implicitly) to measure ourselves against other women: First it’s body size, beauty, sexual desirability, then later it’s children and career and marriage and wrinkles. I’m speaking very generally, of course, but my point is that individual jealousies are symptoms of a large-scale scarcity logic. Susan bought into the storyline that marriage and children would make her happy. She followed the script and she’s still not happy. This cognitive dissonance hurts her, isolates her, makes her petty and resentful. Ro, meanwhile, is doing something less socially acceptable, and in some ways she is freer, but she still compares her own path with Susan’s.

"In my life today — as a writer, mother, teacher, feminist — I try to push in the opposite direction: against normalcy, obedience, and conformity."

When I was 12, my mother told me, "You need to lose weight so that you’ll have more choice of boys to date." I adore my mom, and we have a great relationship now, but when I was young she gave me some pretty terrible messages about making my body conform to rigid standards of "acceptable" and "attractive." And these messages didn’t originate with her. She learned them from her parents, aunts, friends, movies, fashion magazines. In my life today — as a writer, mother, teacher, feminist — I try to push in the opposite direction: against normalcy, obedience, and conformity. Rather than change oneself in order to feel accepted, question the terms of the acceptance.

There’s been — not shockingly! — a stream of dystopian feminist books published in the last several years, including The Power, The Water Cure, and the forthcoming The Handmaid's Tale sequel. The word "dystopian" evokes a sense of something being far-removed from our present reality, and yet these books are all shockingly possible in many ways. How do you balance the idea of “dystopia” with real-life in your writing?

"Dystopia" is such a slippery term, because it carries, as you say, associations of distance and implausibility; But what if one person’s dystopia is another person’s everyday reality? There’s a brilliant novel called Women Talking by Miriam Toews, based on an actual Mennonite colony in Bolivia where the colony women were getting drugged and raped every night by several colony men. It might be tempting to think, "Oh, but that’s an isolated religious community, so different from our own secular society." But the genius of the book is that I’m reading about eight Mennonite women talking about patriarchy and I’m realizing, "This is all of us talking." The new laws that threaten the characters in Red Clocks are, in fact, informed by evangelical Christianity; I based them on the ideas of real-life politicians. Americans are taught that our government upholds a strict separation of church and state, but it doesn’t. There are some extremely devout, even fundamentalist, Christians in elected office who vote according to their religious convictions. Mike Pence, for example —I was researching Red Clocks, his name kept popping up. He signed a law in Indiana requiring women who had miscarriages or abortions to hold a funeral for their fetal tissue.

"One of the superpowers of fiction is that it puts the reader inside the experience of a law’s consequences."

I wanted to imagine an ordinary, unspectacular version of what might happen in the wake of these new laws. The characters are sort of just chugging along in their lives, when they realize — with growing horror — that their lives have changed. One of the superpowers of fiction is that it puts the reader inside the experience of a law’s consequences. Rather than having an abstract conversation about reproductive justice, we can ask what it feels like to be a 15-year-old girl who dreams of going to math camp and becoming a marine biologist but is told, “A pregnancy has started in your body, and you’re not allowed to stop it.” My teenaged protagonist, Mattie, was adopted; and she fantasizes about the biological mother who gave her up, thinking, What if she went on to be a scientist who made a crucial discovery? When a woman chooses not to become a mother, what does that free her up to do?

What do you hope book club discussions focus on in the reading of your book?

I’ve had the pleasure of visiting lots of book clubs, and I love hearing all the different interpretations of the novel. Readers talk about connecting with a character, or wondering why such-and-such happened the way it did; and they often draw comparisons between the book’s setting and our own political moment. Honestly I’m so grateful that book clubs exist at all — and that some of them are reading Red Clocks — that I’m happy with whatever direction the discussions take!