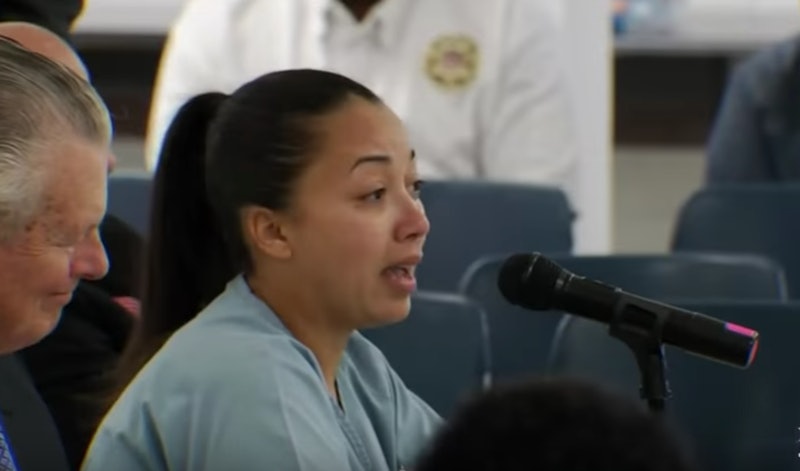 After numerous advocates brought her story into the public eye, Tennessee Gov. Bill Haslam has just announced that he will grant clemency to Cyntoia Brown, the woman who received a life sentence at only 16 for murdering a man who had forced her into prostitution.

“Cyntoia Brown committed, by her own admission, a horrific crime at the age of 16," Haslam said in a statement, according to The Tennessean. "Yet, imposing a life sentence on a juvenile that would require her to serve at least 51 years before even being eligible for parole consideration is too harsh, especially in light of the extraordinary steps Ms. Brown has taken to rebuild her life."

Brown's murder conviction came in 2006, and it led to a life sentence. Under that sentence, she wouldn't have been eligible for parole until she was 69. Her predicament first came into the public eye in 2011, when PBS aired a documentary about her called Me Facing Life: Cyntoia's Story. Her story surfaced again in November 2017, when it drew the attention of numerous celebrities, like Rihanna and Kim Kardashian, who saw Brown's case as emblematic of the ways in which the criminal justice system needed to be reformed.

Even though she was a minor and a victim of sex trafficking, a juvenile court ruled that Brown should be tried for murder as an adult, and prosecutors claimed that Brown killed her captor not out of self defense, but because she was robbing him, as CNN wrote. Since her imprisonment, Brown has acted as a model inmate, and she used her time in prison to work towards her GED and most of the way towards a bachelor's degree, as NBC News reported.

In May 2018, then, after months of advocacy work, Brown got the chance to present her case for clemency at a hearing with the Tennessee parole board, as Rewire.News reported at the time. The six members of the board who were present for the hearing were divided equally between three options: granting Brown full clemency, reducing her sentence to 25 years, or forcing her to serve the entire sentence. The divided ruling left the decision entirely in the hands of Haslam, who had no clear recommendation from the board to work with.

Brown's lawyer released a statement after Haslam announced his decision.

“Thank you, Governor Haslam, for your act of mercy in giving me a second chance. I will do everything I can to justify your faith in me," the statement read, according to The Tennessean. "I am thankful to my lawyers and their staffs, and all the others who, for the last decade have freely given of their time and expertise to help me get to this day."

Brown's statement also talked about the importance of her faith and thanked several other people who had helped facilitate her rehabilitation and education.

"With God’s help, I am committed to live the rest of my life helping others, especially young people," Brown said in the statement. "My hope is to help other young girls avoid ending up where I have been. Thank you.”