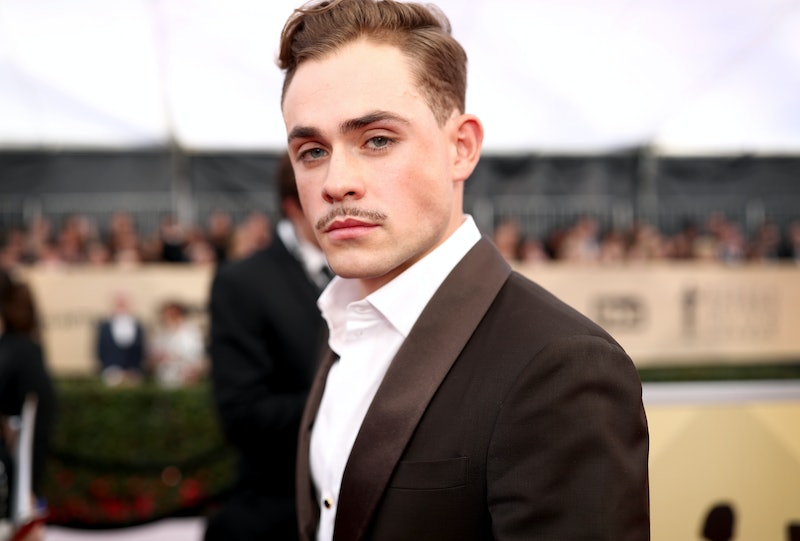 At best, Billy Hargrove is a bad boy. At worst, he's kind of a monster. Things weren't exactly great for the Stranger Things character growing up, though, and he's definitely still dealing with some demons, so to speak. Turns out the real-life Billy didn't have it easy either, according to Dacre Montgomery's recent throwback on Instagram. The actor reflected on his own childhood struggles in the sincere, emotional post, and opened up about how he eventually managed to overcome them. Tissues suggested, but not required.

Stranger Things has pretty much made Montgomery a bonafide heart-throb. Those chiseled abs and impressive acting skills didn't necessarily come naturally, though — he's worked hard to get where he is today. It wasn't easy either, as Montgomery's recent Instagram post revealed, but he believed in himself and never gave up on his dreams.

Alongside a throwback photo of himself as an adolescent, Montgomery revealed,

"When I was a kid, I was lost. I had a really tough time in school. I was a big kid who loved drama. I never got passing grades, I wasn’t popular or a gifted sports player. Girls were never interested in me. I suffered from anxiety from a young age. I was distracted and I wasn’t focused. But I had a dream, I was lucky - I knew what I wanted to do. And every night I went home and I focused on THAT."

He then went on to share how he "visualised a future where my dreams became a reality," despite some bumps along the way. Some of those bumps included failing his high school drama exam, being told to lose weight, getting fired from a job, and being asked to leave drama school altogether. And yet, he persisted.

At the end of his post, he encouraged his fans to do the same. "You can do anything you set your mind to," he wrote. "So, go out there and get it!" *Stands up and starts to slow clap*

The whole thing was incredibly moving and super motivational, too. Kind of makes you want to finally apply to that job you've been eyeing, right? Or maybe it makes you want to start training for a marathon, or learning another language, or sitting down to assemble that piece of furniture from Ikea — mile-long directions be damned. You can do it! It's okay if you lose some screws! They usually come with extras!

Fans have been flooding Montgomery's Instagram comments with praise ever since the actor shared his story. "This made me get up for work," one person wrote. "I needed this post," another fan shared. "And I'm not going to lie, IM INSPIRED. One post can change a heart."

Even Montgomery's Stranger Things costar, Millie Bobby Brown (who plays Eleven) chimed in. "You're amazing," she wrote, followed by three hands-up emojis and a heart emoji.

So, go ahead, get out there, do your thing. And who knows? Maybe one day you'll be a famous celebrity sharing a story of your own.

More like this
'Stranger Things' Finn Wolfhard Is “Proud” Of Noah Schnapp For Coming Out
By Sophie McEvoy
'RHOSLC’s Heather & Whitney Are Still On A “Friendship Break” After Season 3 Reunion
By Jake Viswanath
Everything To Know About 'RHOSLC' Season 4
By Jake Viswanath
Erika Jayne's Estranged Husband Tom Girardi Has Been Indicted On Fraud Charges
By Jake Viswanath
Get Even More From Bustle — Sign Up For The Newsletter
From hair trends to relationship advice, our daily newsletter has everything you need to sound like a person who’s on TikTok, even if you aren’t.