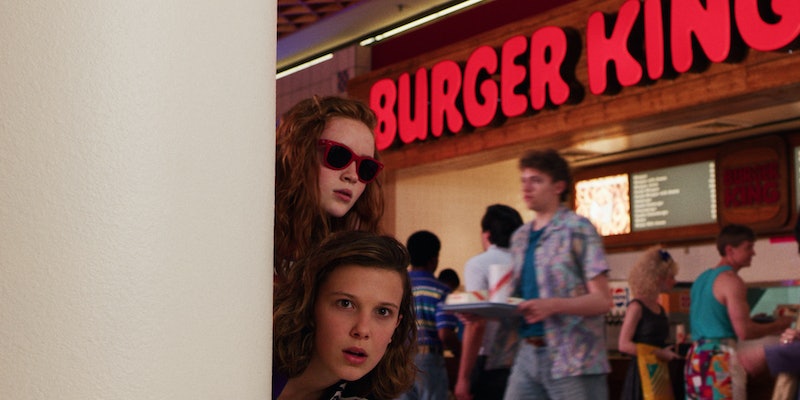 If your favorite part of the new season of Stranger Things is everything with Eleven and Max, you might want to thank Millie Bobby Brown for that. It turns out that Eleven and Max's Stranger Things 3 friendship almost didn't happen until Brown made it clear she wanted these two to be on the same side.

In a new interview with Vulture, Sadie Sink, who plays everybody's favorite redhead, explained how Max and Eleven became besties this season. "Millie definitely made it known to [creators] the Duffers that she wanted our characters to be friends," she said. "I did, too, but she was much more vocal about it. That was exactly what she wanted." And really, who's going to say no to Eleven?

As Sink explained, at the end of Season 2 of Stranger Things it seems as if El and Max "were being pitted against each other" all because of a boy. It's a trope that neither one of the young women wanted to see happen in this show, which has tried to subvert some of the '80s movie trends that are so over. Like say, turning Steve (Joe Keery) into a total mom instead of a well-coifed bully.

"I’m so glad the Duffers did the opposite and had us become this iconic, powerful duo," Sink told Vulture. "Millie and I are such good friends and hang out so much off set, we figured, why not spend more time with each other on set, too? Because we have that genuine bond, it helps with the chemistry in the show."

That real life chemistry is on full display during El and Max's makeover montage at the Starcourt Mall, which Sink says was a very real hangout for the girls. "They had all these different activities planned, and Millie and I got to pick and choose what we were doing, which is what you end up seeing," she said of the scene, which took two days to shoot. "At one point, we were going to get our ears pierced and have a feast in the food court. It was so fun." Unfortunately, there wasn't enough time to film the ear piercing scene, which kind of bums the earrings-less Sink out. "I still don’t have my ears pierced!" she said.

Even despite that, though, "fun" feels like the best word to describe what it's like seeing Sink and Brown onscreen together. There's finally some girl power in Hawkins, Indiana, lots of girl talk, which blessed fans with Max's now iconic dating advice: "dump his ass!"

Netflix hasn't announced Stranger Things 4 yet, but it's bound to happen since the Netflix series broke records during Fourth of July weekend. And when it does, it'll be interesting to see where Max and Eleven's bond goes in Season 4. Hopefully, it will include another very cool lady in Hawkins. Last year, Sink told Bustle, she'd like to see "Max, Eleven, and Nancy all team up or something like that." Knowing what we already know, let's assume that Sink and Brown are already talking to the Duffer brothers about this.