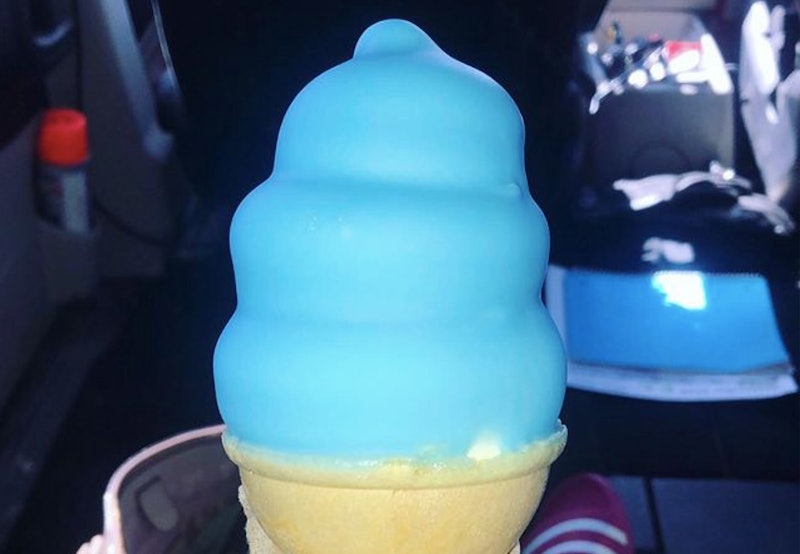 We all have our own Dairy Queen favorite — I'm partial to the Buster Bar with all of its nutty goodness, but, much like the 50 Shades of Grey franchise, I'm a woman of singular tastes. Now, however, there's a new dessert that's got my interest. The Dairy Queen Cotton Candy Dipped Cone has been spotted and shared on Instagram in all of its freakishly blue glory — and I want in. The only problem? Its whereabouts and availability are largely shrouded in mystery. Delicious, delicious mystery.

If you're not familiar with the dipped cones, they're a true treat. You can get a classic vanilla, chocolate, or twist ice cream cone dipped in a hard, almost candy-like shell. Chocolate dip is the classic choice, but this Cotton Candy option has me very curious indeed.

Though a few have appeared on Instagram, they seem to be from Canadian accounts — one of them was hashtagged with Wasaga Beach, which is in Ontario. But I did some sleuthing and even the Canadian Dairy Queen website only has Chocolate Dipped Cones and Dreamsicle Dipped Cones listed on the website — no official mention of the mythical Cotton Candy Dipped Cone.

And when Best Products reached out to Dairy Queen about the Cotton Candy Dip, the company informed them: “We do not have any additional information at this time."

So what does it all mean? It means we live in hope, that's what it means. Is fall a weird time to be dreaming about cotton candy and ice cream? Maybe, but that's what Dairy Queen has me doing with its elusiveness and mystery.

Dairy Queen is no stranger to mixing it up with its dips. The Dreamsicle Dipped Cone made an appearance this year, something fans were very excited about. The sweet, vanilla-orange shell was perfect for summer days and a fast favorite. The Cherry-Dipped Cone still has a loyal following, despite being hard to find.

But where Dairy Queen's flavors really shine are in their Blizzards. They have their classic Blizzard flavors — Oreo will always be my number one — but they also have seasonal and monthly faves that make an appearance. We were recently blessed with the return of the Pumpkin Pie Blizzard, which is my official start of fall. Can't just pick just one? This year, we saw the introduction of Dairy Queen's Blizzard Flights which, for a limited time, let you try out three mini-Blizzards so you could experiment with different flavors. Seriously, there's a lot to play around with.

But if you like your ice cream super sweet, there's a good chance that the mere thought of a Dairy Queen Cotton Candy Dipped Cone has you drooling. How far would you travel to get one? It seems that treasure lies north of the border, but for right now that's as much we know. So keep your eyes peeled for a bright blue candy shell and share your findings with the world — because the people want the Dairy Queen Cotton Candy Dipped Cone and the people want to know more.