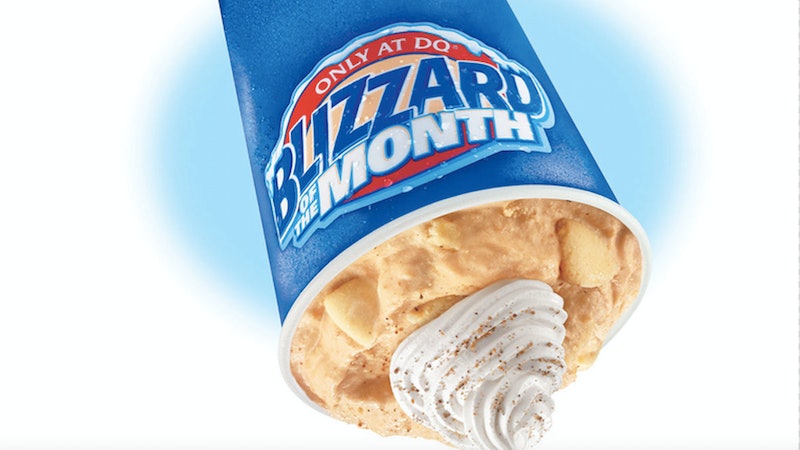 With fall just around the corner, many — including yours truly — are already hotly anticipating the return of Pumpkin Spice Season. Heck, Pumpkin Spice Season is technically already here — because guess what? Dairy Queen’s Pumpkin Pie Blizzard is returning for 2019 in less than two weeks’ time. According to All Recipes and Elite Daily, the popular purveyor of frozen treats will be bringing this seasonal favorite back to menus on Aug. 26. And, uh, folks? I can’t wait. Is it still August? Yes. Did I stock up on pumpkin spice coffee at the grocery store last weekend and start brewing it this week anyway? YOU BET I DID. I am absolutely ready for fall — and the Pumpkin Pie Blizzard is the perfect way to transition into what I feel no shame in proclaiming to be the Best Season Of The Year.

The 2019 return date is substantially sooner than it was last year; in 2018, we had to wait until Sept. 3 for the treat to hit DQ menus again. But, honestly? I don’t mind the early arrival. Consisting of Dairy Queen’s classic vanilla soft serve blended together with actual pieces of pumpkin pie, the Pumpkin Pie Blizzard scratches both the “heck yes, warm weather!” itch and the “UGH I AM SO READY FOR FALL” one. It’s finished off with whipped topping and a sprinkling of nutmeg, too, because, y’know, what’s pumpkin pie without whipped cream and nutmeg?

According to All Recipes, the Pumpkin Pie Blizzard originally debuted in 1991 and has returned to the menu every fall since — which means it predates the current pumpkin spice fad. Although pumpkin spice lattes existed before Starbucks came along, Seattle’s coffee titan is generally credited with bringing the drink — and the pumpkin spice flavor profile — into the mainstream; originally developed and tested in 2003 and launched nationwide, the Starbucks PSL is celebrating its 16th season in 2019. The Dairy Queen Pumpkin Pie Blizzard, meanwhile, is now in its 28th year. It is the grizzled younger millennial to the PSL’s still-fresh-faced gen Z.

DQ Blizzards themselves, of course, are even older than that, though; they launched for their very first year in 1985, which puts them firmly in the older millennial generation (or even on the cusp of gen X and older millennial, depending on how you like to define the generations). The treats were an immediate hit: According to a 1986 article published by the New York Times, Dairy Queen was already predicting that, in its second year, the company would sell 175 million Blizzards in its franchised stores (which then numbered about 4,200) — nearly double the number of Blizzards sold during year one. The idea of whirling soft serve in a blender on its own — that is, without the addition of milk, which would have made it a milkshake — was novel at the time, allowing ice cream lovers to mix in additions like Heath bars, Oreos, or Butterfingers they could only get on sundaes before, reported the Times back then; now, it’s a staple of the menu, with a huge variety of flavor options available, including occasional limited editions and flavors of the month.

Other limited edition Blizzards for 2019 have so far included Peanut Butter Pie Snickers, Sour Patch Kids, and “Oreo Cookie Jar” (a mix of Oreo pieces, chocolate chip cookie dough, and fudge, which I would argue kind of makes it the Half-Baked of Dairy Queen). The Pumpkin Pie Blizzard, though? That one takes the (ice cream) cake for me — and it probably does for pretty much everyone else who is also already filling their pantries with all the pumpkin spice goodness the season has to offer.

More like this
TikTok's Butter Board Might Be The New Cheese Plate
By Emma Carey
On TikTok, Tinned Fish Date Night Is The Latest Viral Food Obsession
By Emma Carey
10 Pumpkin Recipes That Are Way More Creative Than Pie & Lattes
By Rebecca Deczynski and Alexis Morillo
26 Ghost Story Podcasts To Get You Ready For Halloween
By Jessica Booth, Mia Mercado, JR Thorpe and Emma Carey
Get Even More From Bustle — Sign Up For The Newsletter