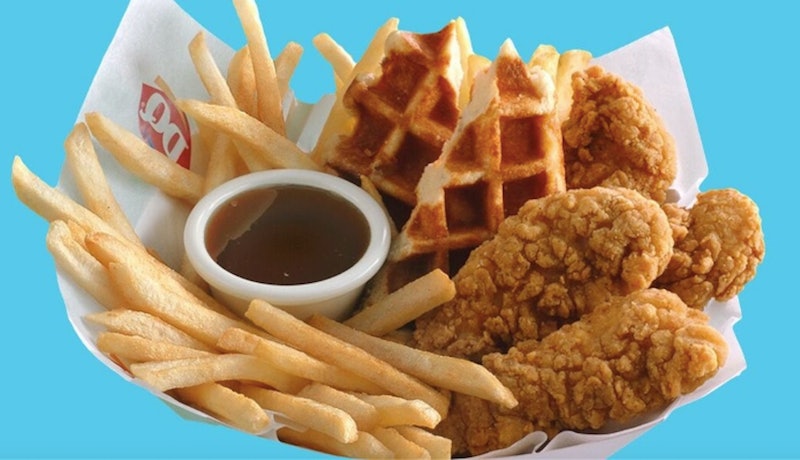 Talk about a summer MOOD. If one southern classic is having a bit of a moment right now, it's chicken and waffles. Not to be left out, Dairy Queen — the home of the best soft serve ice cream in the land (with rainbow sprinkles) — is getting in on the action. It just announced a Dairy Queen Chicken and Waffles basket for a limited time. The new combo will be available on April 1, according to Delish — and it's definitely taking DQ's savory offerings to new heights. Chicken, waffles, french fries, basket — I'm sold.

"We're thrilled to offer the best of both worlds with our delicious take on a classic," Maria Hokanson, Executive Vice President of Marketing for American Dairy Queen Corporation (ADQ), said in a press release, according to Delish. "Fans love our chicken strip basket, and now they can really indulge with the addition of decadent Belgian Waffles." Indulgent indeed. Sweet, savory, crispy, fried, flaky — chicken and waffles packs in a lot of flavors and textures into one dish.

I have to be honest, normally the most exciting Dairy Queen announcements come in the form of new Blizzard flavors — like the Valentine's Day Blizzard that makes an appearance in February — or hearing that the glorious Mint Shake is back just in time to feel lucky and Irish. But chicken and waffles is definitely a reason to celebrate and, with a lot of fried and lunch offering already on the menu, feels like a natural fit.

But as I said, chicken and waffles are definitely having a moment, so if you're not close to a Dairy Queen you can still get in on the action. KFC has also relaunched the classic combo. They're offering the combination up in a multitude of ways — like the sandwich option that gives you a KFC breast fillet inside two waffles and topped with Mrs. Butterworth's syrup. Or you can get your fix in the more traditional chicken tenders, waffle, and syrup all in a basket option. It's only available for a limited time — the company says you can find it from March 23 to April 29.

On the other hand, Dairy Queen told Elite Daily that their chicken and waffle offering will be available until May, so you want to move fast to take advantage of either special. They may be delicious and desired but, like so many things, they are also fleeting. Like a candle in the wind.

Dairy Queen already has a lot of delicious chicken dishes on the menu — from a Honey Hot Glazed Chicken Strip Basket to Chicken Bacon Ranch Sandwiches and more. Paired with an ice cream, a lot of its lunchtime options have a definite summer vibe, perfect for flip flops and t-shirt weather which is around the corner (I think... I hope). But Dairy Queen's Chicken and Waffle development is definitely a step forward for a brand that already specializes in the sugary and the fried domains. There's only one question left: Why is it only available for a limited time? Tell me the truth, Dairy Queen. I'll be waiting.