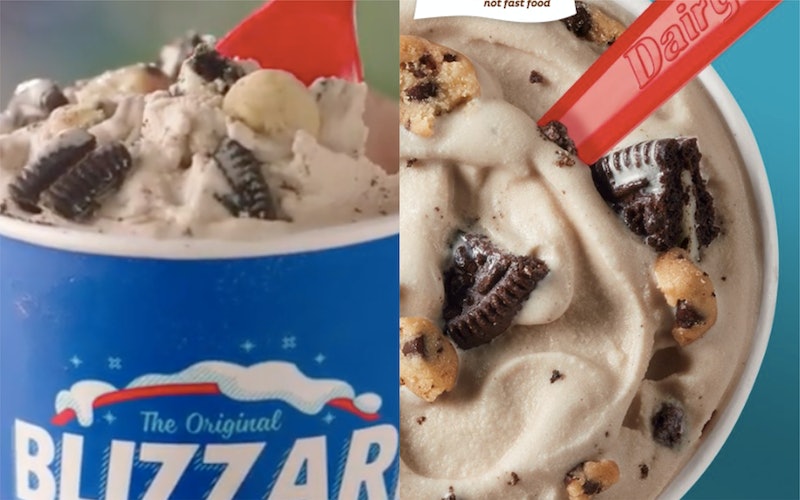 My ice cream ethos has three central ideas: First, ice cream is the number one best dessert there is — better than cake and pie and pastries of all kinds. The second is that vanilla is better than chocolate, which will likely split some hairs. But the final idea I hold about ice cream is that is tastes best in the spring and summer — possibly because this is when chains start to roll out their most delicious stuff. Dairy Queen, always on top of seasonal ice cream innovation, just launched Oreo Cookie Jar Blizzard as April 2019's Blizzard of the Month, and it is going to change the cookies and cream experience forever.

Per the Dairy Queen website, the Oreo Cookie Jar Blizzard is a mix of Oreo cookie pieces, chocolate chip cookie dough, and fudge, which is blended with its vanilla soft-serve. Basically it is as if chocolate chip cookie dough and cookies and cream got together, had a baby, then the baby was served blended with smooth and creamy soft serve. It's available in sizes ranging from mini to large, so there's a suitable snack for when you're just a wee bit peckish or need to take as much ice cream to the face as your hands can hold.

Looking ahead to this vernal time of the year, Dairy Queen has a number of other special items that have just been released. The Dairy Queen Dreamsicle Cone is a decadent take on the classic creamsicle that swaps out orange sherbet for a crunchy orange candy coating on cones of vanilla soft serve. It's a nice, fruity, bright alternative to the classic chocolate-dipped cone for which DQ is so famous. But, in an unlikely turn of events, the hottest new Dairy Queen release (other than the Oreo Cookie Jar Blizzard) isn't dairy-based at all. It's the chain's Chicken & Waffle Basket.

Packed with four or six pieces of fried chicken, two authentic Belgian waffles, an order of fries, and maple syrup, this meal is a perfect savory-sweet combination is the perfect marriage of sweet breakfast and savory lunch ... and french fries. Chicken and waffles may be nearly a perfect food, but it's pretty difficult to make yourself. If you want really good chicken and waffles, everything needs to be made from scratch. Scratch-frying chicken is no joke, so why not just let the Queen do it for you.

Be sure to pick up an extra decadent Blizzard to go with it — this one's only around until the end of April!

More like this
On TikTok, Tinned Fish Date Night Is The Latest Viral Food Obsession
By Emma Carey
10 Pumpkin Recipes That Are Way More Creative Than Pie & Lattes
By Rebecca Deczynski and Alexis Morillo
10 Ways To Be More Empathetic To Your Partner
By Raven Ishak and Lexi Inks
Think Your Partner Is Cheating? These Tarot Cards May Confirm Your Suspicions
By Kristine Fellizar
Get Even More From Bustle — Sign Up For The Newsletter