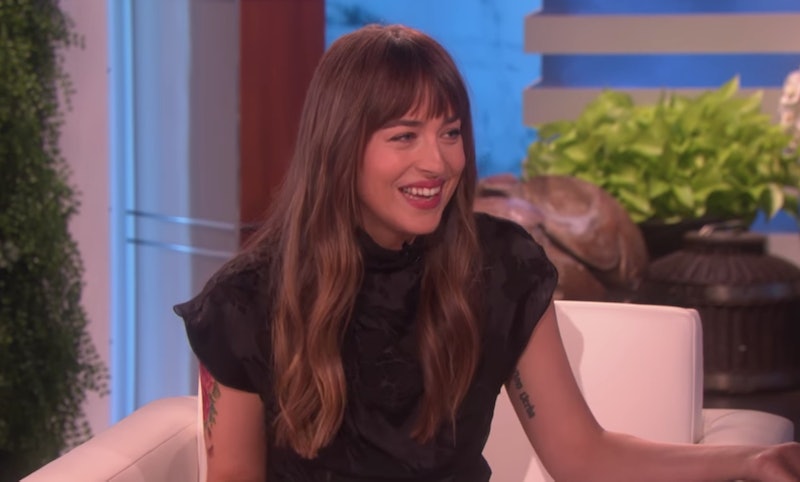 If you're ready for a good laugh, keep reading. During Thursday's The Ellen DeGeneres Show, Dakota Johnson addressed pregnancy rumors that originated on Tuesday. On Oct. 9, TMZ reported that Johnson was pregnant with Chris Martin's baby after it appeared the couple recently released blue balloons at a party reportedly confirming they were having a baby boy. Soon after, a rep for Johnson confirmed to Bustle that the Bad Times at the El Royale star was having a birthday party, not a sex reveal. Thankfully, Johnson was kind enough to further explain to Ellen DeGeneres exactly what happened — and she did it in the most hilarious way.

After sitting down with the daytime talk show host, DeGeneres joked, "That is a mighty tight outfit for someone who's pregnant."

The audience hardly reacted and there were a few people who said, "Aww!", but, like the Fifty Shades of Grey star pointed out, "See, they don't even know what you're talking about." DeGeneres later quickly explained the pregnancy rumors.

The comedian continued to joke with the 29-year-old, to which Johnson hilariously responded, "The only thing I’m pregnant with is a lot of really good ideas, but not any babies."

Boom. Mic drop. Let's give her a round of applause.

She also clarified the balloon situation by saying,

"It was my birthday and there were balloons that happened to be pink and blue and so then I was pregnant. I didn’t know that the balloons were gonna be released. They were just in an arch, but I guess that accidentally happened one of the ends just got let go."

As you can see in the video above, Johnson discussed this is in a way that shows how ridiculous it is to think someone is pregnant based on balloons flying in the air. You can't believe every celebrity rumor. It's also unfortunate that Johnson was simply trying to have a birthday celebration, which turned into her having to put out pregnancy fires left and right. She probably didn't imagine her 29th birthday resulting in she and the Coldplay singer becoming parents together. Really, who would?

Johnson also said because of the false reports, she's had to awkwardly inform people that she was only having a birthday party that they weren't invited to.

"That's the other thing, now I have to be like it was just my birthday and then all the people that I didn't invite to my birthday know I had a birthday party," she told DeGeneres, who also didn't receive an invite.

Of course, the Finding Dory star teased her about not being invited, even though she invited Johnson to her 60th birthday party, which the actor attended with Martin who she's been dating for about one year. Johnson was quick to point out that she wasn't really invited. "I think I kind of crashed your birthday party," the actor admitted, before adding, "I was just arm candy."

DeGeneres responded seemingly referring to the musician, "I knew you’d be with him. I didn’t have your number at the time which is why I invited him and I knew he'd bring you."

Martin and Johnson have been extremely private about their romance, although E! news reported that she briefly told Tatler magazine as the November cover star about the two dating, "I'm not going to talk about it. But I am very happy."

As ludicrous as the pregnancy situation is, it seems like Johnson hasn't let it affect her negatively. She's able to joke and laugh about it — and in a hilarious way. Plus, she has way more important things to worry about, you know, like her job as a successful and talented actor.