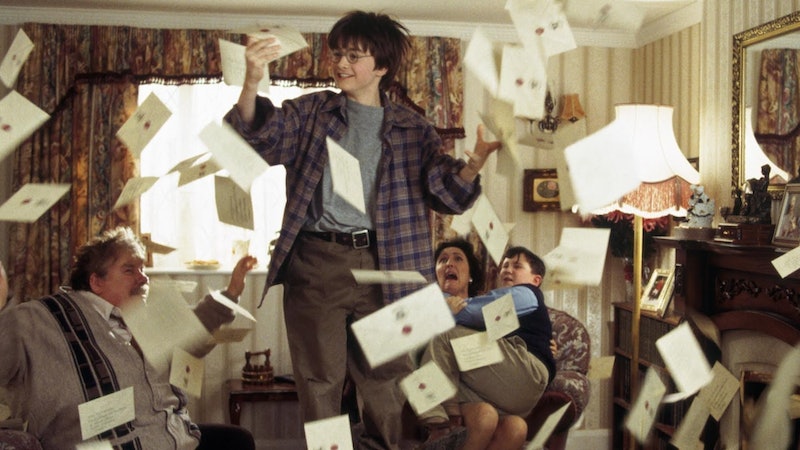 Potterheads hear a lot of Harry Potter fan theories every year, but it's rare to find one of the film series' stars responding to their audience's wacky connections. So I was pleased to learn that Daniel Radcliffe totally believes that wild Harry Potter theory about the Dursleys, even though he was not made aware of it until recently in an interview with Huffington Post.

The Harry Potter fandom has a Gringotts bank vault full of fan theories, but one of the most prominent — and contentious — posits that Harry himself was one of Voldemort's Horcruxes. For those who don't remember, a Horcrux is created when a witch or wizard murders another person, and the Horcrux-making spell stores a piece of the murderer's soul in a nearby object or living thing. If the murderer were to be killed at a later time, their consciousness could return to the Horcrux, giving them the opportunity to be restored to life with the same dark ritual that Wormtail carried out in Goblet of Fire.

Voldemort had six Horcruxes, each of which was tied to an integral piece of his identity. They were: Tom Riddle's Diary, Marvolo Gaunt's Ring, Salazar Slytherin's Locket, Helga Hufflepuff's Cup, Rowena Ravenclaw's Diadem, and his loyal familiar, Nagini. The Harry Potter theory in question contends that Voldemort accidentally created an additional Horcrux when he murdered Lily and James Potter, and that was the young Harry.

As we know from watching both Dumbledore and Ron succumb to their innate evil, Horcruxes tend to infect those who are in constant contact with them, sort of like the One Ring in The Lord of the Rings. This, according to the theory, is why all three members of the vile Dursley clan treated the Boy Who Lived with such cruelty. Although Lily's selfless act protected Harry against the dangers of the world, a tiny piece of Voldemort's evil lurked within him, and it seeped out of him and into his family. Reacting against the darkness, the Dursleys attempted to keep Harry locked away, separated from them for as much time as possible.

In an interview for Radcliffe's latest film, the Australian biopic Jungle, based on Yossi Ghinsberg's memoir of the same name, The Huffington Post asked the young actor if he thought this particular Harry Potter fan theory "could explain why the Dursleys were so mean." Radcliffe had never encountered the Harry-as-Horcrux theory before, but he was kind of into it:

Oh OK, so it affects the behavior of people around it.

Yeah, that’s definitely the first time I’ve heard that one. It’s definitely interesting because it sort of posits a world where these people only known to be a certain way. Actually if you remove him from the situation, [they] would have been quite a nice, friendly family.

"Friendly family" might be pushing it a bit. Although it's logical to believe that good, decent people would react negatively to the presence of a Horcrux, and would want it out of their lives, Pottermore has already established that the Dursleys were petty, haughty, and fragile-egoed long before Harry came into the world. In fact, it's possible that those character flaws made them naturally more susceptible to the Harry-Horcrux's power. Radcliffe went on to note that perhaps the Dursleys did not need any extra help to dislike Harry: "Having been there for Richard Griffiths’ (Vernon) and Fiona Shaw’s (Petunia) performances . . . I feel like it was more they just hated having this kid around."

Of course, Radcliffe wasn't willing to endorse the Harry Potter fan theory without another, more important stamp of approval, however. "Has anyone asked Jo Rowling what she thinks of that one yet?" he asked HuffPo. "I feel like that one ― that’s definitely a good one."