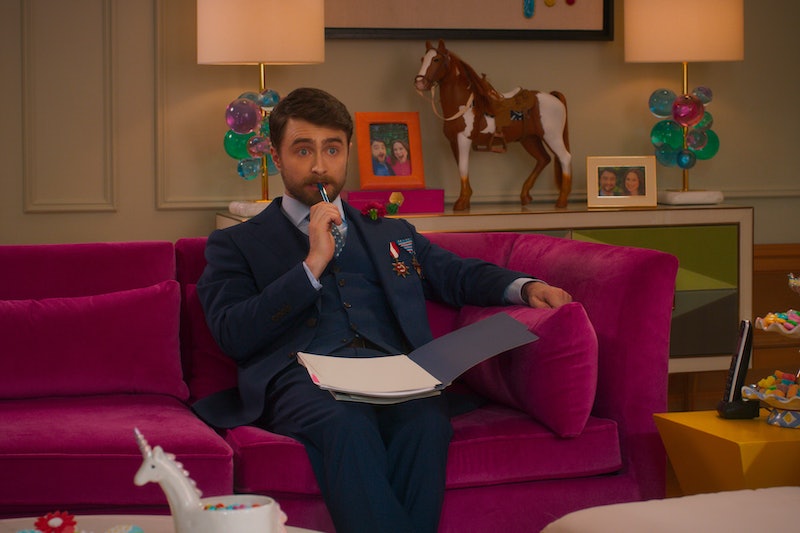 As explained in Netflix's new interactive special, Kimmy vs. the Reverend, Frederick "wasn't allowed a proper childhood." When he "was zero," his parents sent him to a Swiss boarding school where Kim Jong-un was his only classmate, and all they learned was "falconry and how to eat a banana like a gentleman." He never had any friends other than his nanny Fiona (Carol Kane), who he also chose to be the "best ma'am" in his upcoming wedding.

He'd also never had a girlfriend before Kimmy, who he met after writing her a fan letter about her book, The Legends of Greemulax. After a brief stint as pen pals, the pair went on vacation together in St. Tropez, and the rest was history.

"For all Frederick's faults, I think he's a very good match for Kimmy in a lot of ways," Radcliffe explains to Bustle. "I love the idea that he is the only other person who can see and talk to Jan the Backpack, and I feel like that shows that, as weird as it is, they're kind of meant for each other."

Radcliffe points to his own parents, Alan Radcliffe and Marcia Gresham, as an example of what makes the characters work so well together. He explains that his mom's dad "was never around," and his paternal grandfather died when his father was very young. That shared experience is what helped them relate to one another.

"I think you can have versions of that," he says. "Even though Kimmy and Frederick's childhoods were not similar in any way in terms of the material conditions they were in, the idea of people growing up isolated and sheltered and still ending up very good, earnest people, but almost a little too innocent and naive to survive in the world on their own, is a shared experience that could definitely bond some people."

That's probably why, no matter what options you choose, Kimmy and Frederick always get their happy ending.

More like this
At 28, Debra Jo Rupp Was Living A Much Different '70s Show
By Grace Wehniainen
Here’s Everything Coming To & Leaving Netflix In February
By Jake Viswanath
'That '90s Show' Star Callie Haverda Got Advice From Mila Kunis & Ashton Kutcher
By Brad Witter
At 28, Rosie Perez Risked Her Career To Stop Playing Stereotypes
By Gabrielle Bondi
Get Even More From Bustle — Sign Up For The Newsletter
From hair trends to relationship advice, our daily newsletter has everything you need to sound like a person who’s on TikTok, even if you aren’t.