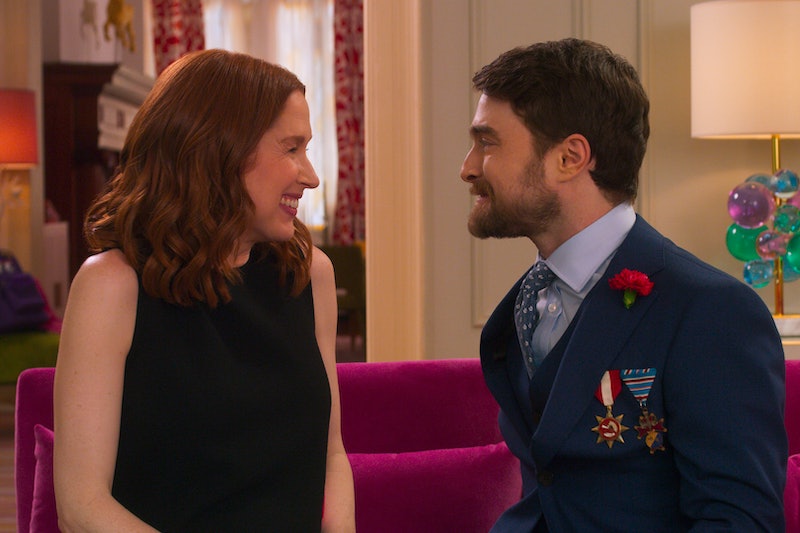 Courtesy of Netflix
By Kelly Schremph
May 12, 2020

Spoilers ahead for the Unbreakable Kimmy Schmidt movie. As much fun as the "Choose Your Own Adventure" element of the Unbreakable Kimmy Schmidt movie is, it also means you're going to miss a few things during your first watch...and second...and even third. For example, you only learn how Kimmy and Frederick met if you happen upon a particular scene.

Early on in the movie, viewers are given the option to have Kimmy either work on her wedding plans, make out with her fiancé Frederick (Daniel Radcliffe), or read the mysterious Choose Your Own Adventure book she found in her backpack. If you choose the "read book" option, Frederick remarks that he can't blame Kimmy for wanting to read instead of kiss him, because books are what brought them together in the first place — in particular, Kimmy's children's book The Legends of Greemulax, which launched her to fame and fortune in the Unbreakable Kimmy Schmidt series finale.

"I was such a fan of Greemulax, I wrote you a letter all by myself,” Frederick recalls. "We started a correspondence and before long, you agreed to meet me for a holiday in St. Tropez. We both got so sunburnt. We had to pee on each other until someone told us that’s for jellyfish, not sunburns." Kimmy looks at him confused. "I know how we met, Frederick."

This is one of Radcliffe's favorite jokes in the movie. "There is an obligation to explain to the audience how this happened and how [Kimmy and Frederick] are now together, but it is obviously the kind of conversation you literally never have in real life," Radcliffe tells Bustle. "You never just sit down and recap how you met with your significant other."

Still, it's a tongue-in-cheek way to fill in the blanks that feels true to Kimmy Schmidt. As for whether or not Kimmy and Frederick end up married...well, that's kind of up to you.