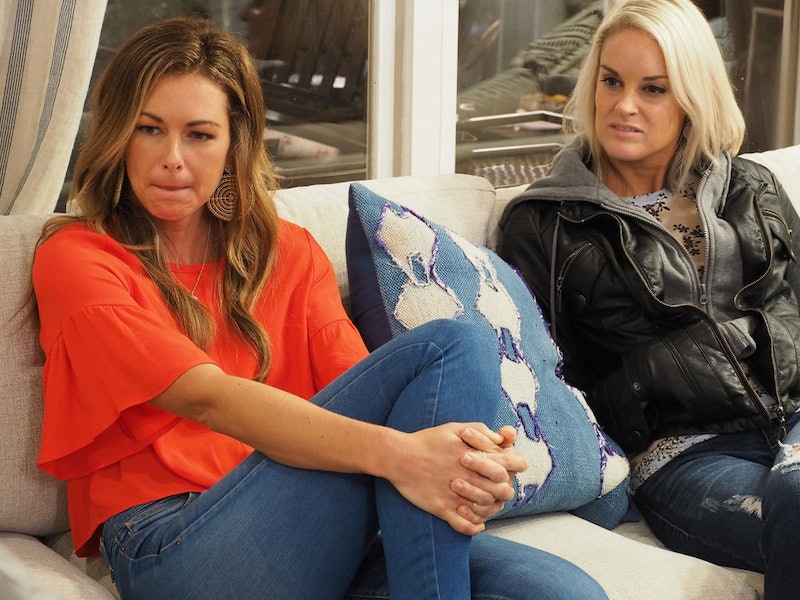 For someone who is not and never has been a featured member of the main cast of Southern Charm, Danni Baird has always been in the middle of the action. It's not a bad gig, actually — you get to be on TV for enough episodes a season, you get to do the confessional interviews, but you also don't have to really answer to producers or show up for a reunion special unless they make you. But things are different in Season 6, and Danni from Southern Charm is at the very center of all of the Charleston drama these day despite always being on the outskirts of the core friend group.

For the record, Danni isn't a principle cast member of Southern Charm by choice, she says, because she's too into her art. "Honestly, I literally am focusing on my career," she told Bravo. "Unfortunately, with artwork, you can't rush it. Yeah, I've really just been focused on me.” That's fine — though Danni has been on the sidelines since Season 1, she seems to have the power of a full cast member.

Danni came on the Southern Charm scene in Season 1 as a "friend of" the cast members. She's one of Shep's ex-girlfriends and Season 1 featured a particularly nauseating and awkward ritual by Thomas Ravenel to get Danni to be his girlfriend. She wasn't into it luckily and stayed on the sidelines until Season 5, when Ashley Jacob's attacks on Kathryn Dennis made Danni pop out of the woodwork to defend her bestie. No one is going to trample all over Kathryn on Danni's watch and get away with it — especially not Ashley Jacobs.

Flash forward to Season 6, and Danni has her foot firmly in the center of two dramas in this season. The first has to do with Danni's then boyfriend, Gentry Todd (they have no current snaps together on IG, so it's hard to tell if they're still together), and how Austen's girlfriend, Madison LeCroy, who also happens to be the stylist on Southern Charm, slid into Gentry's DMs one night while she was dating Austen. Yes, Danni screenshotted the DMs, because if you don't have receipts, what's the point?

To be fair, none of this particular drama has anything to do with Danni — Madison did that DM thing, Gentry told Danni, Danni told the rest of the Southern Charm cast, and Austen did with that information what he wanted to. Danni kept secrets, but ultimately, this one is not her relationship and has nothing to do with her.

The bigger drama with Danni has more to do with Kathryn, her BFF. Kathryn has been through the wringer in the past few years, and so it's easy to see why Danni would be protective of her. Kathryn has spoken openly in the past about her experiences with depression, and when Kathryn goes off the grid, her friends tend to worry.

This time around, Kathryn was just traipsing around doing press and hanging with her new man, and the rest of the Southern Charm pals were just supposed to get along without her texts and response. Danni saw Kathryn's apathy as an affront to all of the help she's given Kathryn over the years. And the last episodes of Southern Charm focused a lot on Danni being resentful and Kathryn not caring.

As evidenced by the Instagram post above, Danni and Kathryn have made up. In a post from her own Instagram account, Kathyrn wrote, "That’s when I realized what a true friend was. Someone who would always love you — the imperfect you, the confused you, the wrong you — because that is what people are supposed to do. I’ve learned a lot from you @danni_baird and I LOVE YOU."

Right now, Danni has the best of both worlds — can pop in when she likes for a treehouse vacation, and she can pop out to paint when all the screaming and sewing gets to be too much.