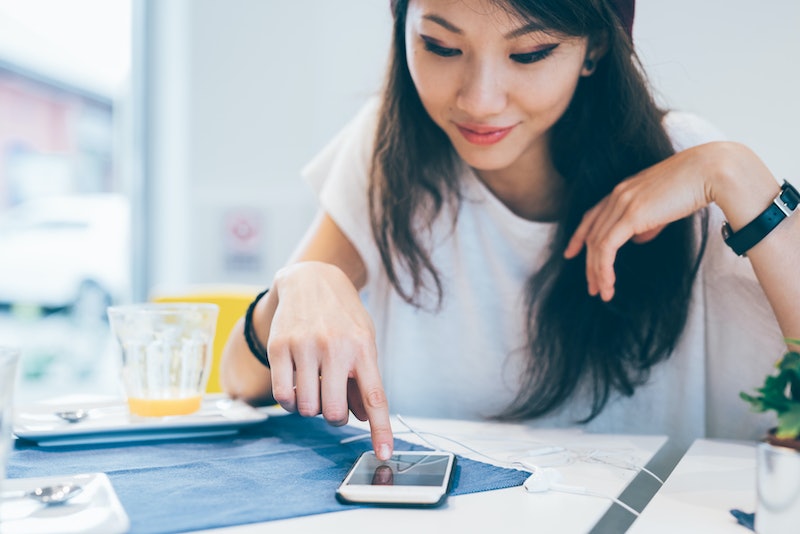 I used to joke that the reason my group of friends from high school was so tight was because we all felt strongly about the same things, from our undying love for Vanessa Carlton's "White Houses", Sandy Cohen on The OC, and the San Francisco Veggie Sandwich from a cafe in our town to our distaste for George Bush (the president at the time), the weird tree that smelled like a fish by our school, and gaucho pants. They're still my best friends today.

While there are probably tons of reasons we've remained good friends through the years, I'm curious about how much a role mutual likes and dislikes play in friendships and even romantic relationships? That's the philosophy behind new dating app Hater, which launches Feb. 8 and uses an algorithm to match you with people who hate the same stuff as you do.

"It really all comes down to having common ground," matchmaker and dating coach Julia Bekker, tells Bustle. "Having similar likes and dislikes can certainly allow two people to connect initially, but i'm not crazy about or sold on the concept of people making love connections based on things they 'hate'." Luckily, on Hater, you can also swipe on things you like and love.

“We want people to express themselves more honestly," Brendan Alper, CEO of Hater, said in a press release. "Plus, it’s easy to start a conversation with someone if you know you both hate pickles.” FYI, pickles are a true love of mine so this hits close to home, but Alper brings up a a great point — this app lends itself to great conversation starters. And anyone who's ever used a dating app knows that getting a convo going can be like pulling teeth, especially when it starts with "hey".

When you sign on to Hater, you'll first see a series of swipeable topics. You can swipe up (love), down (hate), left (dislike), right (dislike), or tap it to skip it. Your tastes will then feed into your profile, so others can see how you really feel about guns, gum on the sidewalk, bass drops, the patriarchy, and burritos that fall apart.

Then, you can swipe on people. When you click into a profile, you'll see a potential match's photos, how compatible you are, and how they felt about each topic they swiped on. Though Alper tells me swiping on topics was more popular than swiping on people on beta. And once you download this, you'll get it — it's super addictive and even kind of thought-provoking too. While topics like gun control and man-spreaders were no-brainers for me, I struggled for a few too many minutes on how I feel about YouTube comments. (On one hand, they can be entertaining af, but I don't think they're adding anything or making the world a better place. If I was a YouTube star, how would I feel about the comments and the trolls?) I skipped that one.

So can this method of pairing people up really work? Perhaps now is the time more than ever. "I think with the turbulent view on politics and some sport teams (like the Oakland Raiders) thinking of moving locations, in a "fun" spirit as well as a bit of serious, this can be something to connect on," Stefanie Safran, Chicago's "Introductionista" and founder of Stef and the City. "During the election many dating sites and even apps popped up about your support for a candidate. I think that since the dating space is getting more and more cluttered, people are looking for something more general to connect on other than 'gluten-free'."

While what people will connect on the app remains to be seen, Hater shared the most polarizing topics between men and women on the app with Bustle, which are bound to get you all riled up, because the word "panties" is still being used and why, god, why? Take a look below:

Men love the zoo, but women hate it.

Men can't get enough of sloppy kisses (WTF guys), but women want nothing to do with them.

Men on the app heart it, but women despise it.

Women love them but men hate them. I've never really thought about them, but I mean, why not?

Women <3 them (Aries/rising sign Libra, whattup?) but men hate them because they are no fun and don't get moons.

While not agreeing on 3-D movies probably won't mean your relationship is doomed, if nothing else, Hater is aiming to make dating fun again — and that's something we could all use right now.