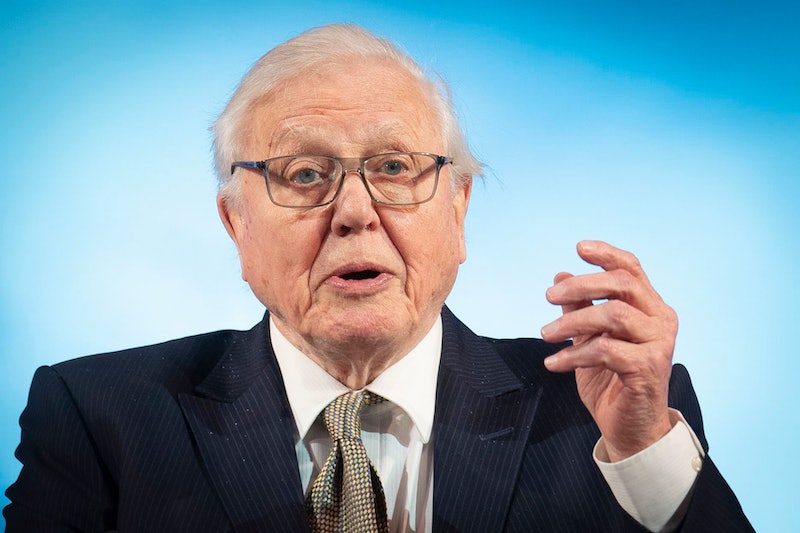 Climate change is an issue that isn't going to disappear. It's also an issue that requires immediate action in order to ensure the planet remains in a safe and healthy state. One of the UK's most beloved documentarians has taken it upon himself to spread this message far and wide. And David Attenborough's most recent climate change statement is the most powerful by far.

On Monday, the 92-year-old (no, I can never believe his age either) gave a speech at the World Economic Forum in Davos, Switzerland. He hammered home how pressing the climate change problem was, but ended on an optimistic note that proved that the human race does have the ability to stop global warming in its tracks.

"I am quite literally from another age," his speech began. "I was born during the Holocene — the name given to the 12,000-year period of climatic stability that allowed humans to settle, farm, and create civilizations." He went on to explain how everything has changed: "The Holocene has ended. The Garden of Eden is no more. We have changed the world so much that scientists say we are now in a new geological age — the Anthropocene — the age of humans."

Instead of blaming corporations and industries for the mess Earth currently finds itself in, Attenborough took a different path. "We need to move beyond guilt or blame and get on with the practical tasks at hand," he said. He mentioned how his upcoming Netflix series, Our Planet, will spread the message to "hundreds of millions of people in almost any country on Earth."

Scheduled for release on the streaming platform on April 5, the Attenborough-narrated Our Planet has been four years in the making. Traversing 50 countries, it will showcase the planet's most precious natural spaces and emphasize just how fragile these are.

On Tuesday, Attenborough spoke once again in front of a crowd. This time, he was interviewed by Prince William. Telling the royal that it was "difficult to overstate" the climate crisis, the broadcaster stressed that "we are now so numerous, so powerful, so all pervasive, the mechanisms we have for destructions are so wholesale and so frightening that we can exterminate whole ecosystems without even noticing it."

"We have to recognize that every breath of air we take, every mouthful of food we take, comes from the natural world. And if we damage the natural world, we damage ourselves. We are one coherent ecosystem. It's not just a question of beauty, or interest, or wonder — the essential ingredient of human life is a healthy planet. We are in danger of wrecking that."

But, as before, he had a positive statement to make, adding: "The point is that we have this option ahead of us. We have to take the option to protect the natural world. There's a source of great optimism there; we have the knowledge, we have the power to live in harmony with that natural world."

This hopeful message has been echoed by another well-known face. On Monday, Leonardo DiCaprio's foundation announced a potential way forward that it has been funding for the past two years. Researchers from the University of Technology Sydney, University of Melbourne, and the German Aerospace Centre teamed up to produce a way for humanity to achieve — and even exceed — the 1.5ºC global warming limit.

In 2018, scientists stated that humans had 12 years to stop the planet from exceeding this temperature increase. If we fail, the result is likely to be catastrophic. The Leonardo DiCaprio Foundation's model demonstrates how each region in world can stay below the 1.5ºC limit using resources and technologies that already exist.

"With the pace of urgent climate warnings now increasing, it's clear that our planet cannot wait for meaningful action," the actor said in a statement. "This ambitious and necessary pathway shows that a transition to 100 percent renewable energy and strong measures to protect and restore our natural ecosystems, taken together, can deliver a more stable climate within a single generation."

One website has criticized the computer model, noting there are too many confounding factors to produce such a strategy, but sometimes a little optimism is what's needed to get things done.