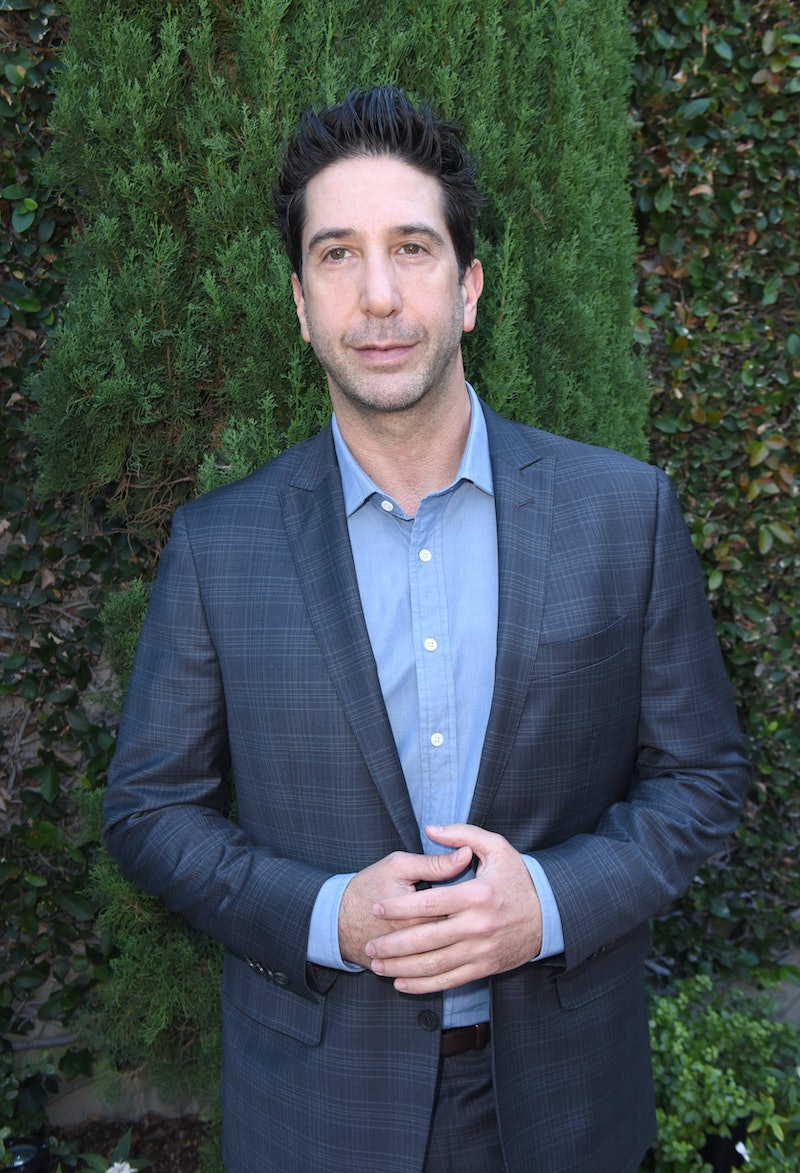 Here is some major news: David Schwimmer's lookalike was arrested for alleged theft. The Lancashire Police in Lancashire, England shared the update on Twitter on Monday. The police department's tweet also thanked the Friends star for his help and support during the incident that made global headlines.

"Following the appeal we posted looking for a man who resembles a well-known actor, we now have an update. Thanks to our colleagues @MetPoliceUK, a 36-year-old man was arrested in Southall last night on suspicion of theft. Thank you for the support, especially @DavidSchwimmer!"

Schwimmer has yet to respond to the arrest news, but seeing as he's been paying attention to the incident since the beginning, it's probably safe to say the actor will comment at some point. The Metropolitan Police, who was also tagged in Lancashire Police's tweet, did respond by making an appropriate reference to the Friends theme song. "Happy to help @LancsPolice #IllBeThereForYou," the tweeted on Nov. 13.

You may recall a few weeks ago, a Ross Geller doppelgänger caught the internet's attention after Blackpool Police in the U.K. posted a bulletin on Oct. 23 in search of an unnamed individual who was suspected of stealing a wallet, a jacket, and a cell phone from a restaurant area. After a CCTV photo of the man in question carrying a case of beer was shared, many fans couldn't help but point out the uncanny resemblance to Schwimmer and his Friends character, Ross.

The police also wrote next to the photo of the unnamed man, "Do you recognise this man? We want to speak to him in relation to a theft at a Blackpool restaurant on the 20th September."

Many thought they recognized him, because he looks so much like Ross. U.K. police even later released a statement clearing Schwimmer's name. "Thank you to everyone for your speedy responses," the statement began. "We have investigated this matter thoroughly and have confirmed that David Schwimmer was in America on this date. We're so sorry it has to be this way."

Soon enough, and as you can see below, Schwimmer got in on the fun. He actually went to a grocery store and had someone film him carrying a similar case of beer down an aisle. As he approached the camera, he stared directly right into the lens. His recreation was spot-on, and one many fans enjoyed greatly.

The actor who will forever be known as Ross Geller captioned his video,

"Officers, I swear it wasn't me. As you can see, I was in New York. To the hardworking Blackpool Police, good luck with the investigation.#itwasntme"

When it comes to Friends, no matter the situation, you can always count on fans to speak up and make some type of connection or reference. It's also good to see that Schwimmer was such a good sport about it all. It sure sounds like police in the U.K. appreciated his support, and possibly even his parody video.

At this time, no further information has been released about the arrest or the suspect.