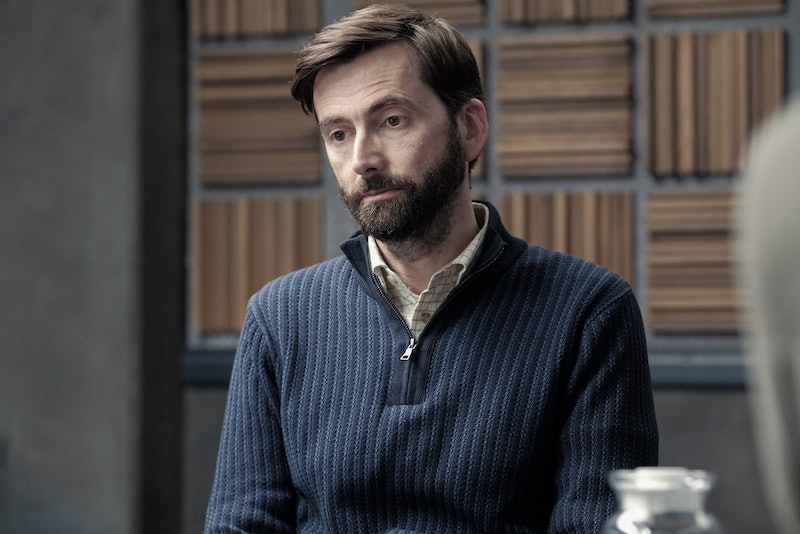 David Tennant, who appears in the first episode of Netflix's Criminal as Dr. Edgar Fallon, is known for playing memorable and "big" characters on Jessica Jones, Good Omens, and of course Doctor Who. Whether he's the villain, the hero, or something in between, Tennant is always there with a certain dramatic flare. So the fact that Tennant's character on Criminal is subtler than what fans may expect makes determining his guilt on the subtle drama even more difficult.

Tennant's performance is intense, but quiet. Literally — Edgar barely speaks for the first fifteen minutes. The official description from Netflix lays out the low-key tone of the intense series:

Criminal is a police procedural with a unique premise: it takes place exclusively within the confines of a police interview suite. This stripped down, cat-and-mouse drama will focus on the intense mental conflict between the police officer and the suspect in question.

Because the story is so contained, each episode watches more like a short film or vignette than a serial procedural like Law & Order. Each episode's criminal is the protagonist and center of their respective story. In the first episode, Tennant's character Edgar is accused of brutally murdering his teenage step-daughter.

If you grew up with Tennant playing Barty Crouch Jr. in Harry Potter and the Goblet of Fire, or are still spooked by his Jessica Jones character Kilgrave, it's easy to believe he is capable of such a horrible crime. Heck, he's the new voice of Scrooge McDuck in the DuckTales reboot. Sinister comes easy to Tennant.

On Criminal, Tennant is much harder to read. If you're waiting for some kind of explosive outburst or supernatural evil from Edgar, you may want to watch something else instead. This show requires more leaning forward than what fans are used to with Tennant.

As for the specifics of the character and story, one thing that's frustrating about Edgar's case on Criminal is that we as an audience are forced to watch this girl's murder be litigated by men. The investigators are primarily male, and many of them mention their own daughters as a tactic to get Edgar to admit that he killed his stepdaughter. Too often in real life, men use this "as a father of daughters" line of thinking when discussing sexual assault against and violence towards women. It removes the victim's autonomy and defines these women by their relationships to men. Whether the show is intentionally commenting on what gets said in these types of trials, or falling into the same trap, the choice to remove women from the interrogation room also removes a level of trust in the procedures. Keep that in mind as you watch and try to figure out whether or not Edgar is guilty for yourself.

Criminal is a grounded character study that gives the audience plenty of information to solve the case, but not a lot of time. You're going to have to watch the nuances carefully. While Edgar is not as rakish or flamboyant as some of Tennant's other characters, he is every bit as engaging — and maybe every bit as guilty, too.

More like this
Netflix Shut Down 'Bridgerton' S3 Rumours About A “Very Dark” Storyline
By Bustle
This 'Gossip Girl' Wardrobe Error Has Gone Viral On TikTok
By Alyssa Lapid
'The Last Of Us' Has Officially Been Renewed For Season 2
By Darshita Goyal
Every 'That '70s Show' Character Who Returned For The Netflix Spinoff
By Grace Wehniainen
Get Even More From Bustle — Sign Up For The Newsletter
From hair trends to relationship advice, our daily newsletter has everything you need to sound like a person who’s on TikTok, even if you aren’t.