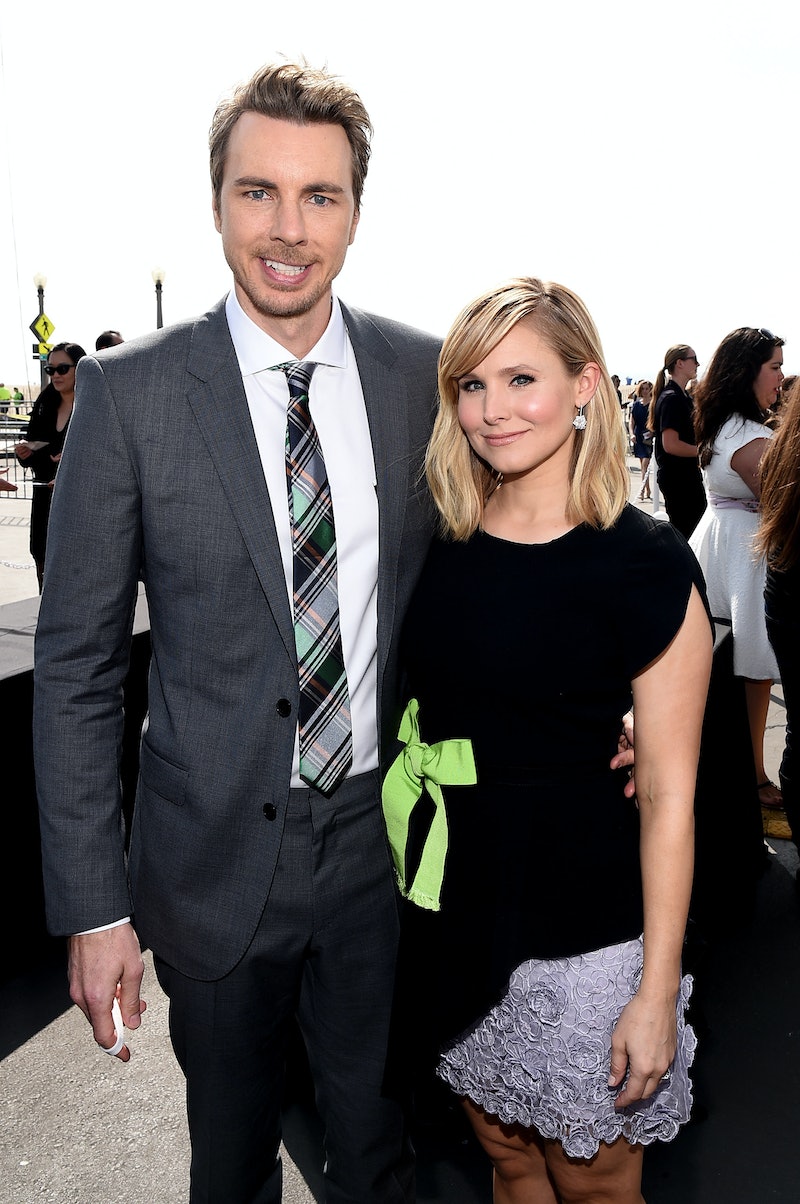 These two make one hilarious couple. On Thursday, Dax Shepard celebrated Kristen Bell's birthday with an Instagram that will make you laugh and swoon. The fact that Shepard can share a post that's funny and sweet speaks to the fun-loving and supportive relationship he has with Bell. Of course, when it comes to the Veronica Mars star turning 39, Shepard couldn't help but share quite the memorable video of the two.

First, let's talk about the former Parenthood actor's message for Bell. He wrote,

"Happy Birthday Buddy!!! I've been with you on a third of your ride, and I hope I'm lucky enough to burp/throw-up/suffer/thrive with you for all the rest. Best Mom, best wife, best friend, longest story teller. You're everything to me and more [12 heart emojis]"

Shepard and The Good Place actor have fantastic sense of humors and constantly make each other laugh. They also love each other immensely and couldn't imagine their lives without one another. So, the way Shepard wished Bell happy birthday makes complete sense.

Now, as for the video Shepard used to accompany his heartwarming caption. The clip shows the couple attempting to recover after eating an extremely spicy piece of chocolate. "That was 100 times worse than I was expecting," Bell declares at one point. Shepard looks like he's going to both vomit and pass out all at once. Bell also adorably added,

"It's very spicy or ficey, as our daughter would say, in your stomach."

Between them burping and almost vomiting, the couple look like they had horrific food poisoning. Why did they do this? While appearing on The Ellen DeGeneres Show in February, Bell and Shepard explained why they ate the spicy chocolate.

Shepard is a spokesperson for the Prostate Cancer Foundation and they wanted to raise money and awareness for the foundation by encouraging others to go to the doctor for prostate exams. So, Bell and Shepard participated in the Choco Challenge from Fuego Box. For every chocolate bar purchased, Fuego Box donated $5 to prostate cancer research.

Well, they even did an Instagram Live in which they ate the "violently hot piece of chocolate," as Bell described it to Ellen DeGeneres. They both absolutely regretted doing the live.

As they told DeGeneres, they had to force themselves to throw up afterwards, because that's how awful they felt. Shepard said, "Oh, it got much worse after stopped recording. Things went south in a hurry… We did have to evacuate orally at some point. I don’t know the classy way to say it. And then sleeping was really rough. We were both really kicking around."

In the Choco Challenge video, you can see that Shepard was literally sweating and kept saying, "Oh, my God." Bell also questioned, "I'm just wondering why truly it hasn't subsided?"

The challenge definitely didn't go as easily as the couple had hoped, but they now have a hilarious memory to look back on for the rest of their lives. Plus, the video came in handy for Shepard's birthday message to Bell. He definitely knows how to turn what was an awful situation at the time into something sweet and funny.

More like this
Austin Butler Confirms Vanessa Hudgens Pushed Him To Do 'Elvis'
By Alyssa Lapid
Watch Kelly Clarkson Sing A Taylor Swift Breakup Song About A Toxic Relationship
By Alyssa Lapid
Did Pete Davidson Remove His Kim Kardashian Tattoos? Photos Point To Yes
By Alyssa Lapid
Khloé Kardashian Writes Touching Instagram Tribute To Tristan Thompson’s Mother
By Alyssa Lapid
Get Even More From Bustle — Sign Up For The Newsletter
From hair trends to relationship advice, our daily newsletter has everything you need to sound like a person who’s on TikTok, even if you aren’t.