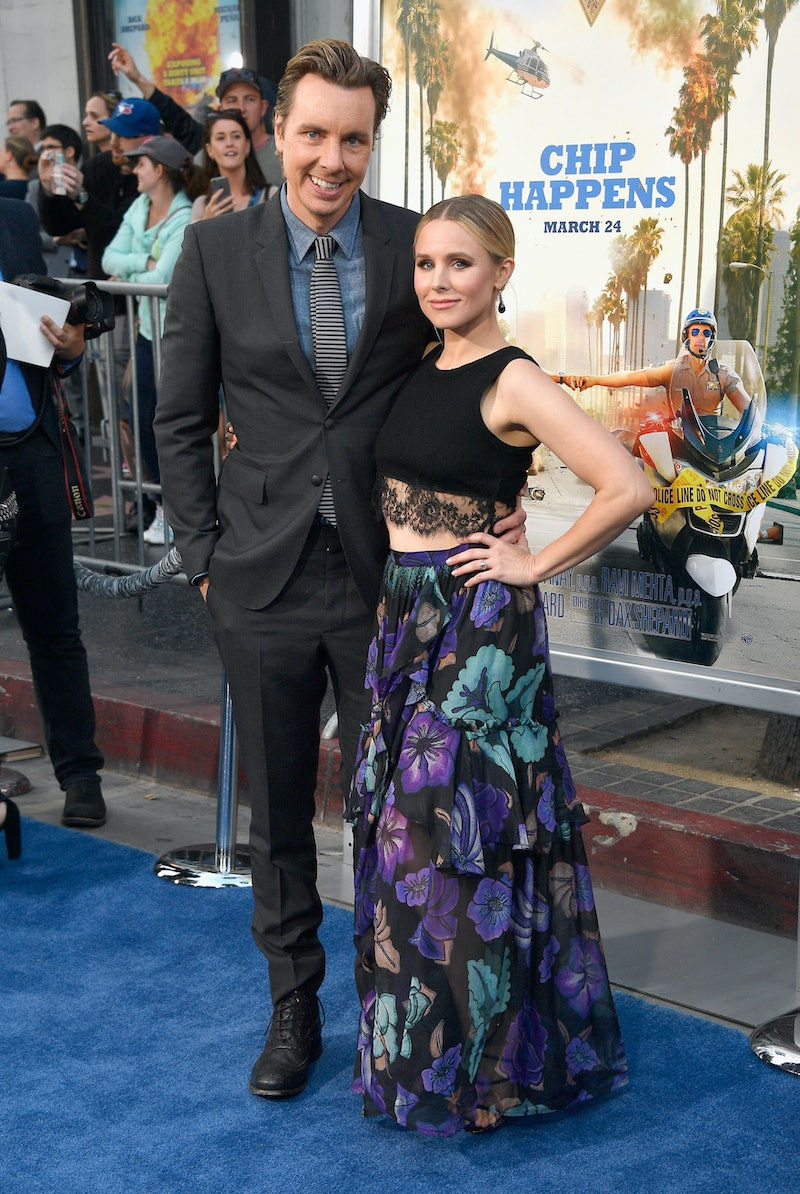 Dax Shepard and Kristen Bell decided early on when they had their first daughter, Lincoln, that their daughters would stay out of the public eye, with both being vocal about their disdain towards paparazzi photographing their kids. But, over the weekend, the Dax Shepard shared a picture of his daughters on Instagram, showing them with their mom, Bell, in matching denim jumpsuits.

But looking at the picture, you'll notice you can only see the backs of Bell and the girls. It's staged to look like they're staring at the car, but the reason why their faces aren't shown is likely intentional. Shepard and Bell have always blurred their daughters' faces or shown their backs in pictures, in order to keep them out of the public eye. And the parents have become pretty creative over the years when it comes to hiding their faces.

In a recent Christmas picture shared by Shepard, their 5-year-old Lincoln is shown styling Bell's hair. (The Good Place star later shared a selfie of her brand-new hairstyle.) To hide her face, Shepard used cute flower stickers. He even used one for his younger daughter, Delta, who's shown sleeping in the background. And in another adorable picture featuring Lincoln driving a boat with him, he uses a heart sticker to hide her face. It's clear that The Ranch actor wants to be able to share adorable moments of parenthood while also keeping the girls out of the public eye.

But Bell has taken a different approach over the years. Bell actually hadn't shared pictures of her daughters on Instagram until January, when she posted a throwback picture of herself with Delta and Lincoln at the Women's March. "Me last year at the #womensmarch. Holding up my fellow women and reminding them they have rights and agency over their bodies, they deserve equal pay, and do not have to be afraid to use their voices loud and proud. Would do it again today, and any day in the future," Bell captioned the pic. But, like her husband, Bell covered her kids' faces with heart stickers. And it wasn't until October that The Good Place star shared another adorable picture of her daughters during a beach vacation. But that one was taken from the back, in order to not reveal their faces.

It might seem unconventional for Shepard and Bell to opt not to share their parenthood adventures as much with fans, but it's understandable why they want to take safety precautions. Earlier this year, Bell opened up to TODAY’s Natalie Morales about confronting a paparazzo at her daughters' school. As soon as she spotted him, she drove to the parking lot where he was parked, blocked him with her car, and calmly confronted him. "Hi. My name's Kristen. Do you realize how much you are putting my kids at risk? I have confidence your mom raised you better. I'm asking you to delete those photos," Bell reportedly said to the paparazzo. It's clear that Shepard and Bell are doing their best to make sure their daughters have a normal, safe upbringing, and that may mean fewer family pictures online, but that's a small price to pay when it means preserving their kids' privacy.