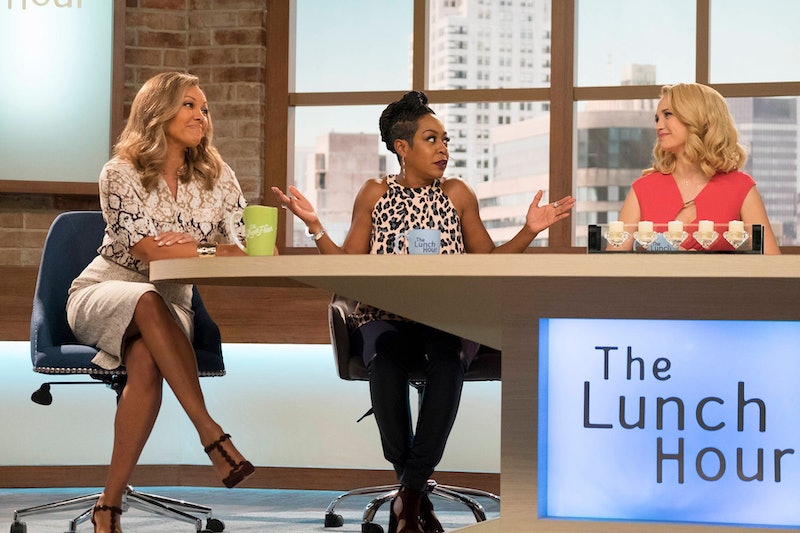 The word "diva" has a storied past. I sit down with Vanessa Williams, on the set of VH1's new scripted drama Daytime Divas, who tells me where the term really comes from. "Diva is a word given to a spectacular performance from a woman who has done a divine aria on stage," she says. "When an audience jumps to their feet and says, ‘Brava, diva.’ She has exceeded all expectations." But Williams and her co-stars are well aware that the word has taken on a whole new, often negative, meaning. That's why the Daytime Divas cast is looking to change what it represents.

Based on Star Jones's book Satan's Sisters, the fictional story goes behind the scenes of a daytime talk show hosted by a panel of women. But "diva" in this context doesn't necessarily mean what people think. "The word now has been misunderstood and bastardized and it is an excuse for behaving badly and being a brat, getting your way and being egocentric," Williams says. But in DD, "diva" means a hardworking woman who will stand her ground and won't apologize for her success. AKA, a boss.

"We’re five women in power, struggling for that top position and everybody is really good at their job," says Camille Guaty. "When that happens, a lot of conflict ensues. I wouldn’t call it catty, it’s real." Actor Chloe Bridges adds that the show is about competition, not cat fights. "We’re just trying to define [diva] as Beyonce defined it." And this is a group of hustlers.

"They have unique personas that are different from everyone else," says actor Fiona Gubelmann. "As an actress, you rarely get to play a strong leading woman. We have five of them. They’re well-rounded women with real struggles."

Guaty respects their characters' hustles. "We want to represent that we’re hard workers. We show up on time, we work our asses off, we deserve to have the confidence that we do," she says.

Not to mention, males rarely ever get slapped with the label "diva," even when they should. "Male actors are divos," Williams says. Her co-star, Tichina Arnold, agrees. "You can’t have two alpha men in one room." And these ladies have seen plenty of men act out with "diva" behavior. "Oh my god, I know male actors who are more knowledgeable about makeup than I am. Vanity is not exclusive to women," says Chloe Bridges. Guaty says she worked with a male actor who would scream at talking cast and crew while he would try to nap in his trailer, even putting up signs reading, "Quiet, actor sleeping" on set.

"Everyone thought it was absolutely ridiculous," Guaty recalls. "I often feel like male actors are more insecure than women." Thus, "diva" is often describing women or gay men, according to Guaty. "If it was Queer Eye, we may have the same connotations. Women and gay man are thrown that ball," she says. Same thing goes for the word catty. "Instead of somebody’s hair being pulled, two dudes got into a bar fight over the same issue. Nobody would describe that as catty," says Bridges.

But they're on a mission to change things around. "It’s just the way our world has grown up to think and see. We’re trying to change that," Guaty says. Additionally, they're holding up the VH1 name, specifically the iconic VH1 Divas. "VH1 has a brand that has 'diva' in its makeup and that’s an important word for them, thus, how we fit into the lineup," Williams says. Guaty agrees. "It’s VH1’s signature, we’re proud to be a part of that title," she says. "You’re never supposed to judge your character, so we don’t. Why should we get backlash for being a bitch just because we have a point of view we want to say?"

Williams, who has been in the business for over 30 years, leaves me with a story about when she was first starting out. "I would bring my daughter to auditions and other actresses would watch her while I’d go in. I didn’t have a nanny, that was what we did," she says.

Now that hardly describes what people normally refer to as diva behavior.