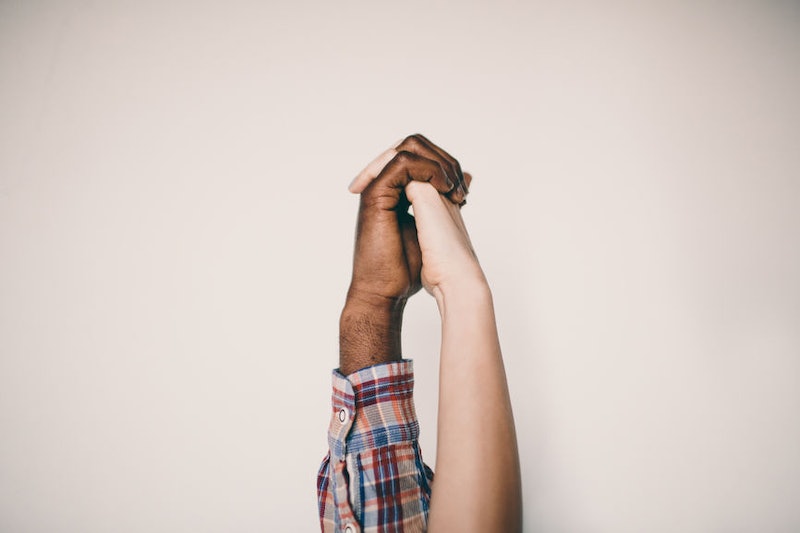 My boyfriend has OCD coupled with anxiety. Not the kind of Obsessive Compulsive Disorder that people imagine; not the obsessions with cleaning or checking the door's locked three times. No, his OCD revolves around the idea of perfection. It affects every aspect of his life, whether that's his career, the way he looks, or his relationship with me. Most of all, he explains, he wants to feel like someone in the world. Many people can relate to that. I certainly can. But, despite having the ability to relate, dealing with my partner's mental illness is incredibly difficult.

That's not something I ever hear a lot of people say. In fact, I feel selfish for writing this when he has so much to deal with. But the lack of honest discussion surrounding the ups and downs of a relationship filled with mental health conditions doesn't do anyone any favours. So I've decided to share how I feel.

When I first met my partner, he kept all of his worries hidden away. It wasn't until we started spending a considerable amount of time together that I began to notice just how long he'd take to get ready to leave the house, or how he'd spend long periods of time sitting in silence, or how he'd ask the same questions over and over again to reassure himself.

Now we have been together for over two years, and there have been plenty of ups and downs. Some days are great — days where both of us forget the tension that his OCD can cause. Other days are terrible. We cry. Doors are slammed. Hurtful words are screamed. I know it's not his fault. But, sometimes, the only thing that keeps me going is to think of the OCD as a separate (slightly villainous) individual and focus on the funny, smart, kind, and caring person my partner really is.

When you love someone, you stick with them through thick and thin. Coping with the burden of another's mental health, however, feels like dredging through a never-ending war zone. My boyfriend feels the struggle too. "You already have so many responsibilities as a person. The OCD adds on another thing you've got to take care of in your life," he says. "It makes having a relationship hard."

According to OCD UK, around 750,000 people in the UK currently live with the condition. But the charity uses an alternative statistic to explain just how many people are impacted by OCD. "It’s worth noting that these figures could potentially be doubled if we assume that the majority of people living with OCD will involve a loved one in their OCD compulsions," its website states. "[This] means that, at any one time, over a million people in the UK could be affected."

There are forums where partners can express their frustrations and any other emotions that pop into their heads on a daily basis. Their messages are encouraging, but I am yet to post a single thing. It may be because I, like so many others, feel guilty more often than not. I feel it when I accuse my partner of being in a relationship with his OCD (rather than with me), when he stops me mid-conversation because he needs to think and I'm seething inside at his abruptness, when he's having a bad day and it ruins our plans, when I fail to understand why everything is such a big deal to him.

And then there's the feelings of loneliness. Although my boyfriend encouraged me to write this, he prefers that I don't go into the nitty gritty details with family and friends. He doesn't want the people he knows to have a tarnished view of him. I respect that, but having only him to talk to about these specific problems is often counterproductive.

It leads to me trying to act like his therapist when I have no idea what I'm doing. It spurs me on to urgently "fix" him when I know it's not that simple. Dr. Elena Touroni, a consultant psychologist and co-founder of The Chelsea Psychology Clinic, explains that this inclination isn't uncommon.

"Mental health issues can sometimes appear quite irrational from the outside but it’s important to remember that they are very much real for the person experiencing them," she tells me. "Because of this, some people might try to help their partner by arguing logically about their issues, whilst others might try to counteract it through reassurance."

But, she says, "neither of these are likely to be effective. The best thing we can do is to provide validation of someone’s distress and empathetic listening — rather than trying to fix the issue — and then importantly, guide them towards expert help, whether that be through a GP or a private therapist."

My partner has sought help in the past a number of times. He's tried therapy with different counsellors and medication that made him feel like a zombie. He's dealt with ridiculously long NHS wait times, expensive private appointments, and a lack of professional interest in his mental health. It's no wonder he doesn't want to talk to anyone anymore.

But, deep down, I know progress is not being made. As Barbara Honey, counsellor for relationship support charity Relate, tells me: "Don't try and make it better — you can't." Instead, she reels off a bunch of actionable tips that any person in the same boat can adopt:

With that last point in mind, Honey also explains that Relate offers a couple therapy service for those struggling with anxiety and/or depression. "Much research was done before this service was created which found a very strong link between mental health and relationships and that couple therapy has a strong positive effect on people’s mental health," she says, adding that, thanks to funding, couples may receive up to 20 sessions for free on the NHS. To access the service, visit your GP or call Relate to find out which centres offer it.

As for my personal situation? Well, I'm going to broach the idea of joint therapy sessions. I will continue to be there for my partner, support him in the best way possible, and urge him not to give up on professional help. Most importantly, though, I will remind myself that it's okay to focus on me once in a while. Because if I'm exhausted, I am can't help him.