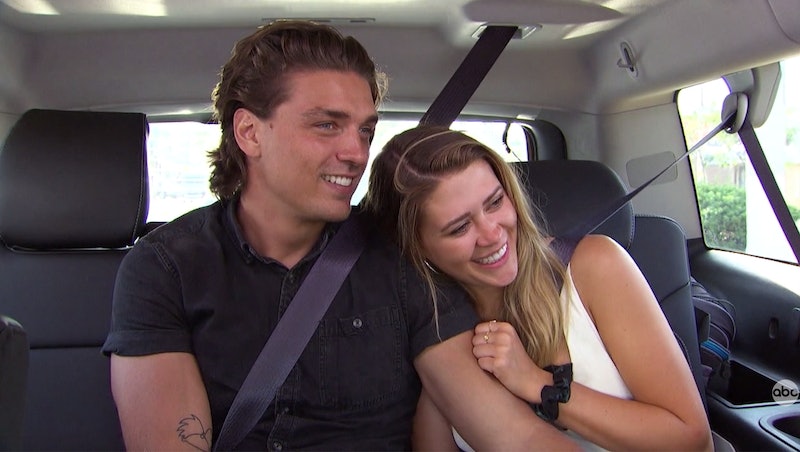 Dean Unglert and Caelynn Miller-Keyes happily left Bachelor in Paradise in a van — likely on the way to his own van. As if their social media activity didn't make it obvious, they're still together. And now, Dean is opening up about why their relationship works. Dean thinks Caelynn is his perfect match in Bachelor Nation for a reason that he shared on the Bachelor Happy Hour podcast with former Bachelorette leads Rachel Lindsay and Ali Fedotowsky-Manno.

This isn't Dean's first time on a Bachelor show. It's actually his fourth appearance and the third time that he left with a relationship. Ironically, the only show he left without a relationship was Rachel's Bachelorette season.

Dean told Ali and Rachel, "Here’s the thing about my relationships post-Bachelor, from The Bachelor: All of the girls that I’ve dated publicly from the Bachelor franchise — I’m not going to name names — but they’ve always been regarded as these great women. And they are good, they’re great people."

Dean clarified, "Both after Paradise and Winter Games, and it was always kind of regarded as I was the lesser version of them, and they were always slumming it to be with me, and how they were always so much better than me."

The mustache advocate continued, "So there’s a certain amount of undue pressure that gets put on a relationship and me specifically when the entire world thinks that the girl that I’m dating is slumming it by dating me. And why is that girl with him?"

Dean began, "And so now in this case…" Then, Rachel completed his thought when she said, "You don’t have that problem."

Dean responded, "Exactly, and I’ve communicated this with her before. I was like, the fact that you’re regarded as kind of like a 'mean, catty person' at times on the show, is almost relieving to me because it removes so much pressure for me to try to prove to other people that I’m worth your time. If that makes sense."

The van enthusiast concluded, "I don’t know if I’m accurately describing it, but it removes a lot of pressure for me to be in this relationship."

Dean clarified that he doesn't actually see her as a "mean, catty person." However, he admitted, "I mean, she has her moments, I think. Obviously, we’ve seen it all on television. She knows that she’s been that person and I’ve pointed out to her that she’s that person sometimes."

Specifically, Dean pointed out Caelynn's faults in her drama with Blake Horstmann. Dean emphasized, "I've never said that Caelynn's innocent in all this. I never said that. I've been pretty critical of her actions."

He even straight-up said, "She was overdramatic on the first couple episodes of Bachelor in Paradise with the Blake stuff and she knows that. Obviously, her and I have had private conversations with each other."

Dean shared, "I'm constantly trying to remind her, look you can be open and honest with me. Be vulnerable with me. Tell me all these things. Show me all the skeletons in your closet. I want to see them. I would rather hear them from you than from someone else." And, yes, he was very much aware of the Blake drama before those texts were ever released.

It could have been said in a more eloquently way for sure, i.e. not mentioning her "catty, mean" reputation. Nevertheless, Dean does make an interesting point. Their relationship seems to work because there is less pressure on them and because they are honest with each other about their flaws.