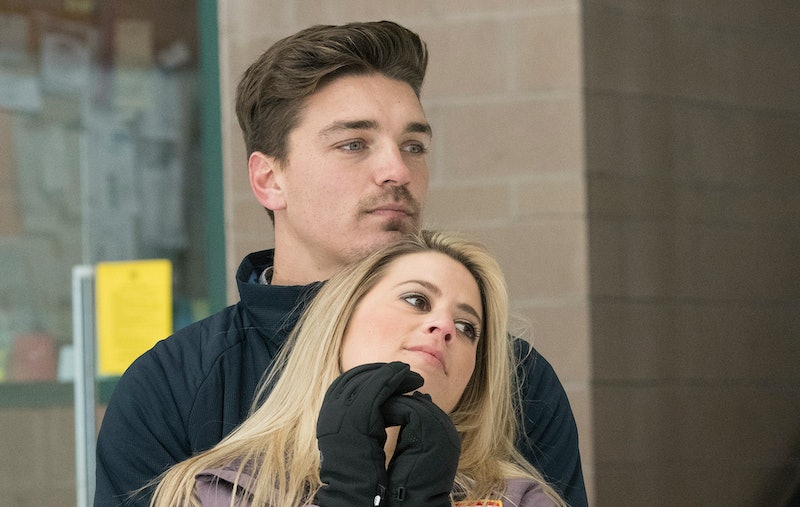 Dean and Lesley both thought they'd found their person while on the February 2018 Bachelor Winter Games. During the reunion show, Dean even gave Lesley a key to his house. But things went downhill not long after that, and the couple parted ways in April 2018. Based on what Lesley and Dean said about the relationship, it seems to have ended for a combination of reasons — among them distance and readiness.

People magazine reported that Dean and Lesley were mostly long-distance during their relationship and didn't really get to use the key Dean gave Lesley. This aspect of the relationship was hard for Lesley, she told the magazine. "It hasn’t been easy, especially coming from the show where we lived together in a beautiful environment for a couple of weeks to basically being long distance and having to rely on FaceTime and text messages," she said.

Aside from the time apart, one other thing seems to have played a big factor in the demise of the relationship — Dean wasn't necessarily ready. Lesley posted an Instagram post with a lengthy caption following the split that alluded to that.

"I know it's imperative to find someone who chooses us and acknowledges our many layers, who can be open and vulnerable, and most importantly, who is ready," she wrote. "To meet someone and be met. To be chosen and to choose. To love and to be loved. This is everything. All we need is that same energy reciprocated, and despite how open and loving you attempt to be, people can only meet you as deeply as they've met themselves."

Dean also acknowledged to Entertainment Tonight that he had some work to do on himself before jumping into another relationship. "I do have a lot of growth to do," he said. "I think that I still have a lot of discovery to do in myself before I'm really ready for something like that, and that's a hard thing to come to terms with." He added, "You think you're ready for a relationship at a time in your life, and you slowly begin to realize you're not nearly as ready as you thought."

Even though the couple didn't last, Dean had nothing but nice things to say about Lesley in his ET interview. "Lesley's a great girl. It's just one of those things where it's sometimes two people aren't meant to be together and I think... neither of us wanted to drag it on longer than we had to," he said. "Like, if this isn't your forever person, then you should kind of nip it in the bud and four months to end a relationship is better than 12 months, if it's not going to marriage and kids and all that kind of stuff."

While Dean may have had nice words for Lesley, he had less than nice things to say about Bachelor franchise relationships in general in a January 2019 interview with Access as reported by Us Weekly. He called "every single" relationship stemming from the show "fake," besides the ones that turned into marriages with children. "I never want to get in a Bachelor relationship again because, whether or not, there is an inkling or whisper of a possibility that the other person might be in it because they see the value in it monetarily or whatever, social status wise," he said. He added that he felt "strongly" that he wanted to stay away from Bachelor Nation relationships.

Well, surprise! He changed his mind a handful of months later. It's unclear how Paradise will work out for Dean (and his new mustache) this time around. Hopefully he is really ready for a relationship now so he doesn't end up with another breakup on his hands.