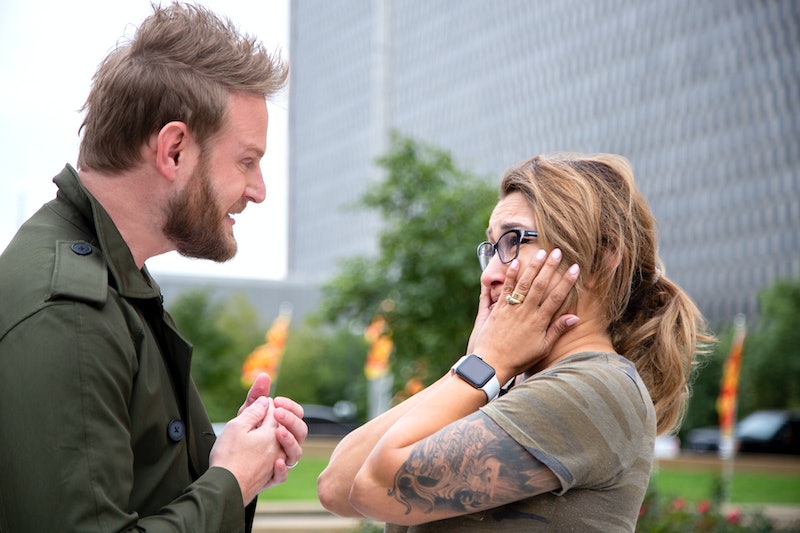 Spoilers ahead for Queer Eye Season 4. Netflix's Queer Eye may be a fun makeover show at surface-level, but since the start, it's made an effort to highlight deeper, important topics. That's reflected in Season 4's "A Tale of Two Cultures," which introduces us to Deanna Muñoz, a Mexican-American whose journey mirrors the experiences of many second-generation immigrants today: though she was born in the U.S., she feels torn between her two identities. On one side, Queer Eye's Deanna feels too Americanized to be Mexican; on the other, she experiences racism from her white neighbors for not being "American" enough.

Proclaiming a love of tattoos, lowrider cars, and Mexican art (which led her to found the Latino Arts Foundation), Deanna strongly identifies with her parent's home country. Yet she faces the same identity crisis that many second-generation immigrants do: she was born and raised in the U.S., so she doesn't speak Spanish or cook any Mexican dishes. This is something Deanna is conscious of; her parents raised her in a predominantly white suburb and stressed assimilation into American culture, something Deanna says was to "protect" her and minimize any hardships she would face as a Chicana and daughter of immigrants. As a result, she grew up feeling caught in the middle. "I'm living in a world where I'm not Mexican enough, and I'm not white enough," she says.

For many children of immigrants, Deanna's journey may feel painfully familiar. The Pew Research Center found that most second-generation immigrants are fully integrated into American society: they speak English, and obtain degrees and own homes at higher rates than their parents. They're also comfortably modern in their beliefs, often skewing more liberal in terms of religion, dating, and marriage. And yet there's an unspoken tension: though they are quintessentially American by birth, language, manner, and dress, they often report feeling like they're treated as outsiders by white Americans simply because of their ethnicity. The Pew Research Center found that 31% of second-generation Latinx people report experiencing discrimination, and 25% have been told to go back to Mexico.

"There is an ingrained perception among many white people that all Latinos are foreign no matter how long they've been in the United States or how 'assimilated' they are," UC Berkeley law professor Ian Haney López told NBCNews.

Deanna's episode captures this struggle perfectly: despite being an American citizen who only speaks English, works a full-time job, and runs a foundation that enriches Kansas City's art scene, Deanna is still subjected to micro-aggressions and outright racism. "I know we get the looks and the stares of our cars, and you know, even when we bought the house my husband was assumed [to be] the worker, not the homeowner,” Deanna tells Karamo. Her family lives in a well-to-do neighborhood that is predominantly white, and some of her neighbors have expressed their discomfort over the Muñoz's presence there.

"There has been some passive-aggressiveness of racist things that have been said," Deanna continues. When Karamo presses the subject later, Deanna reveals that one of her neighbors sent a message to her husband, mocking him with "the Mexicans were building their own wall" after seeing him landscaping his own front lawn.

It's difficult to watch Deanna and her family be made to feel unwelcome in the only place they've ever called home, but that's the reality many Latinx people face today, and even more so under the Trump administration. In fact, Deanna's experiences encapsulate exactly why President Trump's recent tweets telling "Progressive Democrat Congresswomen" to "go back" to where they came from are so damaging: the issue has never been that Deanna and other immigrant families are failing to assimilate enough into American life. It's that they're already American, but their white neighbors refuse to accept that they belong here.

Just as Deanna uses her arts foundation to proudly assert her identity and heritage regardless of the racism she faces or the distance she may feel from her parents' country, so too is it important that Queer Eye sheds light on the experience of being a Mexican-American in 2019. Art has the ability to transform and inspire, and in the end Deanna uses her arts foundation as a statement for how she fully inhabits her two worlds. Deanna may still be on an ever-changing journey toward self-acceptance, but being determined to introduce her Kansas City community to the richness and joy her culture has to offer is ultimately the most American thing of all.