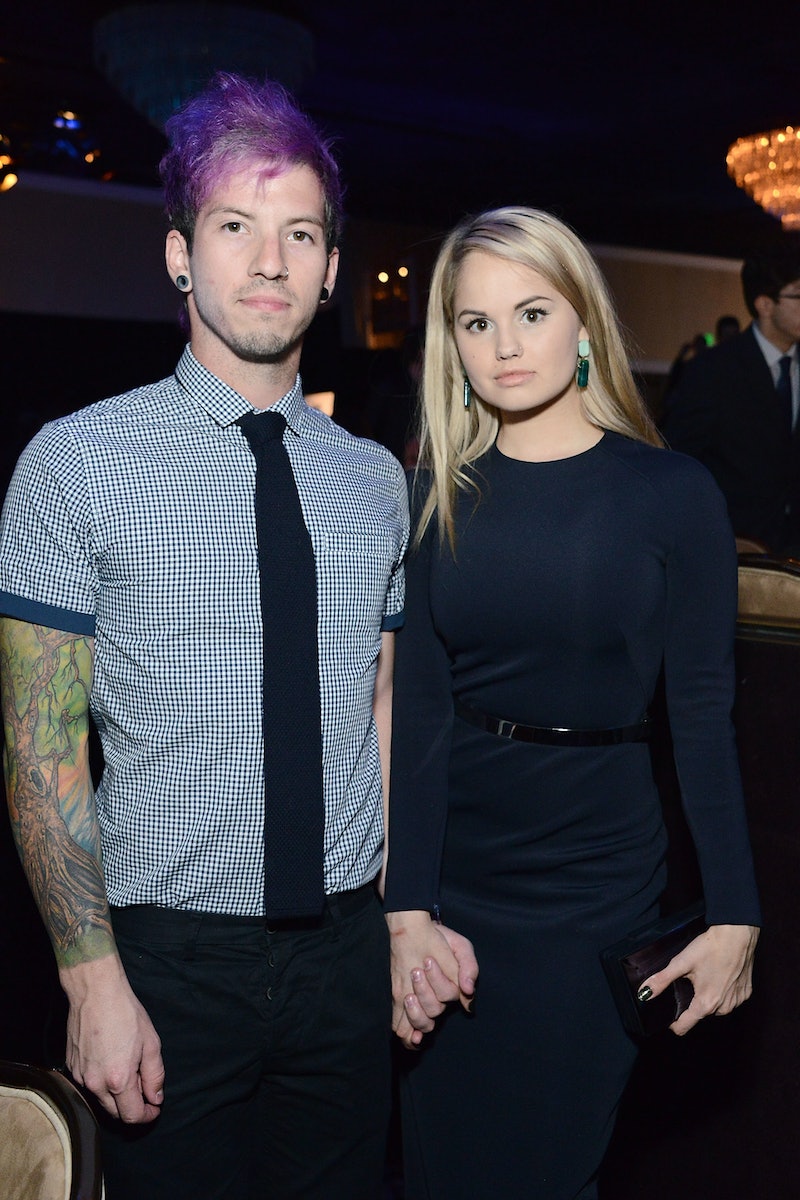 Wedding bells are ringing for one fan-favorite couple this holiday season. On Saturday, Dec. 22, Debby Ryan and Josh Dun announced their engagement on Instagram and Twitter. The Insatiable actor has been dating Dun, who is the drummer for Twenty One Pilots, for several years. The couple both shared pictures of the romantic proposal, which took place in a rustic tree house in New Zealand. Ryan wore a long floral dress, while Dun was dressed in all black for the occasion. The forest engagement looked so magical, and the two stars shared messages on Twitter and Instagram to show their excitement.

Ryan posted a set of engagement photos on Twitter, in which she looks completely shocked by the proposal. She can be seen shedding a tear in one of the photos, but she joked about the moment on Twitter. She wrote: "I said yes! Well technically I said "NO WAY" twice but I meant yes." Dun also shared photos of the proposal on Instagram, including pictures of the ring and the magical wooden structure where he popped the question. He wrote, "I found a tree house in the woods in New Zealand and proposed to my girl. She my dude for life. I love you Debby."

Ryan also shared several pictures and videos from the occasion to her Instagram Story, and her photos reveal that the celebration didn't end after the proposal. Dun brought Ryan's brother and sister-in-law all the way to New Zealand for an engagement dinner. The dinner was a secret, and Ryan wrote, "He flew my brother and sis-in-law in to surprise me at our engagement dinner." The dinner looks like a sweet celebration of their love, and it included everything from balloons spelling out their combined couple name, "Jebby," and a delicious looking cake. In her story, Ryan wrote, "you threw the best night."

The Insatiable actor has been dating Dun since 2013, according to Entertainment Tonight. The two have split a couple times since first getting together, but the timeline of their on-again, off-again relationship has been kept private. In August, Ryan confirmed the two were together and happy, as reported by the Sydney Morning Herald. "I'm in love and very happy," she said. "We've evolved and grown so much in our careers, in the relationship, as people since we first met. It's cool and special to have that support system and we are each other's biggest fans."

On Instagram, Ryan showed off the ring in her story. She shared a video of herself holding hands with Dun, writing, "my sweet lil family." It's clear the whole evening was perfect, and they both received plenty of congratulatory messages from friends and fans alike. Ryan shared a message from one of her friends, Sahar Sanjar, that read, "Congratulations to this girl who has the very prettiest crying face". The star responded to note by writing, "still sobbing."

It's been a major couple of years for both stars in their personal and private lives. Ryan, who began her career on Disney Channel's The Suite Life On Deck, was cast in Netflix's Insatiable. Meanwhile, Twenty One Pilots are going strong thanks to several chart-topping songs like "Heathens" and "Ride". According to the Sydney Herald, the couple has made their long distance relationship work over the years by visiting each other on set and during Twenty One Pilot's tours.

Dun and Ryan's engagement looked amazing, from the tree-house location to the fancy dinner with friends and family. It's clear this long-term couple is so happy together, and if this proposal is any indication the wedding is sure to be beautiful as well.