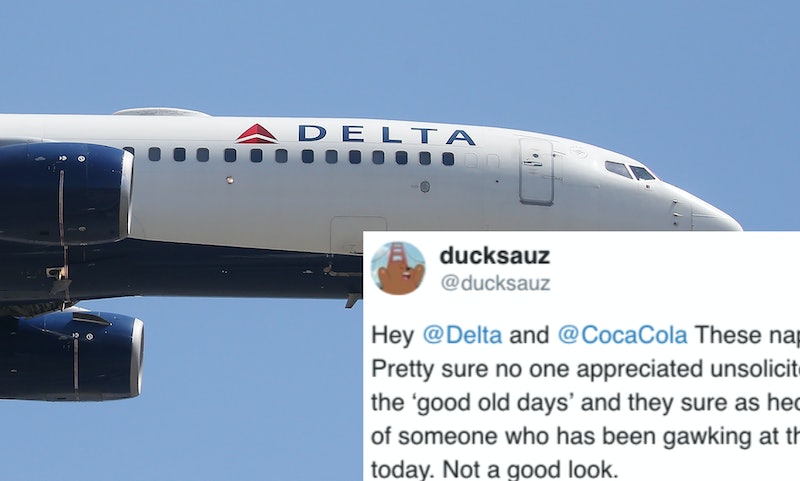 Come on, guys — we should know better by now. Delta Airlines and Coca-Cola made headlines in the last week with a slightly baffling advertising choice that hasn't been received well. Delta Airlines and Coca-Cola were called out for giving out napkins encouraging passengers to give their numbers to other people on board. "Be a little old school, write down your number and give it to your plane crush. you never know," the napkins said. "Because you're on a plane full of interesting people and hey ... you never know." The napkins also contained an image of a Diet Coke can and their logo, as well as — yup— a place to write your name and number before you hand it to an unsuspecting woman just trying to watch her damn movie in peace.

After a number of users called out the napkins on social media — and they were rightfully branded "creepy AF" — Delta pulled the napkins and the companies apologized.

It's unclear how long the napkins had been around for, but it seems like that particular campaign didn't have time to really get off the ground. “We rotate Coke products regularly as part of our brand partnership, but missed the mark with this one," Delta Air Lines said in the statement to USA TODAY. "We are sorry for that and began removing the napkins from our aircraft in January.”

Coca-Cola had a similar apology. "We sincerely apologize to anyone we may have offended," the company said. "We worked with our partners at Delta to begin removing the napkins last month and are replacing them with other designs." Hopefully, these design will show people peacefully listening to their headphones and will remind everyone to let each other live their best lives.

As someone who is annoyed and affronted if someone tries to ask me a single question when I'm listening to my podcasts (or watching cartoons and sleeping) on a flight, the idea of encouraging someone to approach a stranger who you're confined with in a tin can hurtling through the air is total baffling. But some people did really like the napkins. "Thanks @CocaCola and @Delta, for encouraging people to TALK to one another, make new friends, or do anything besides stare mindlessly at phones," one Twitter user wrote. "But don't you know it's practically illegal to flirt these days? Sad world, but nice try & not #creepy." Another wrote, "This is funny as hell to me. Why are so many people offended." But offended many of us were, so the napkins had to go.

Though many brands have been thoughtful about their advertising as of late — just the other week, Gilette went viral as one of the many brands taking a stand on combatting toxic masculinity — it's disheartening to see missteps like these, and a reminder that there are some truly old school ideas about personal space and what passes as courtship flying around. But the rules of the sky are as clear as the rules of the land — leave us TF alone.