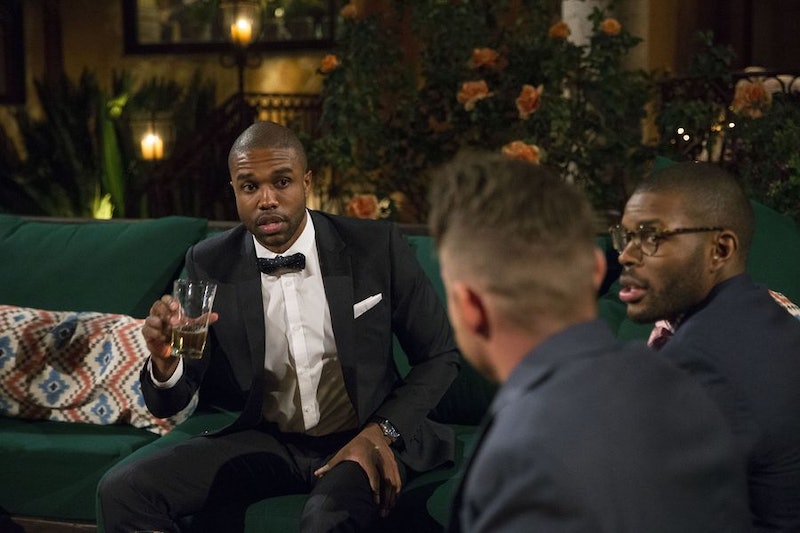 It seemed like Bachelor in Paradise Season 4 was a goner following the allegations of misconduct that shut down production on June 11, but then, the tides changed. On Tuesday, Warner Bros. announced that filming of BiP would resume after its internal investigation into tapes from the show did not support charges of misconduct. But what does this mean for the contestants the alleged incident centered around? Now, we may have an answer. Reportedly, DeMario Jackson will not return to BiP this year. Bustle has reached out to his lawyer for comment or confirmation, but did not receive a reply at the time of publication; Warner Bros. is not commenting on casting at this time.

According to what sources close to the former Bachelorette contestant told TMZ, producers allegedly reached out to Jackson's legal team inviting him to return, but he has allegedly decided to decline. Meanwhile, other insiders claim that a decision has yet to be made as to whether Jackson would be invited to rejoin the show. TMZ sources also claim that this incident has marked the end of Jackson's career in reality TV; instead, they claim he'll be pursuing a future as an on-air personality. And while none of this has been officially confirmed by Jackson himself, the sources did go on to claim that he is struggling with life after the accusations made against him.

Allegedly, Jackson has become so anxious over the past week that he's been seeking the help of a therapist, and the sources claim that although the investigation came up empty, he is still concerned about his name being attached to a sex scandal for the rest of his life and how that might affect him going forward.

BiP stopped filming following "allegations of misconduct." Soon after, reports came out claiming that Jackson and Corinne Olympios were allegedly involved in sexual activity that may have been nonconsensual. TMZ's sources claim that Olympios was not invited to return to the show. Her lawyer, Martin Singer, asserted in a statement that although production wasn't shut down because of a complaint Olympios made, they will be conducting their own investigation "based on multiple new witnesses coming forward revealing what they saw and heard."

OnTuesday, Warner Bros. announced they had concluded their investigation and that BiP would continue filming in this statement:

"As we previously stated, we recently became aware of allegations regarding an incident on the set of Bachelor in Paradise in Mexico. We take all such allegations seriously. The safety, security and well-being of the cast and crew is our number one concern, and we suspended filming so that the allegations could be investigated immediately and thoroughly. Our internal investigation, conducted with the assistance of an outside law firm, has now been completed. Out of respect for the privacy interests of those involved, we do not intend to release the videotape of the incident. We can say, however, that the tape does not support any charge of misconduct by a cast member. Nor does the tape show, contrary to many press reports, that the safety of any cast member was ever in jeopardy. Production on this season of Bachelor in Paradise will be resuming, and we plan to implement certain changes to the show’s policies and procedures to enhance and further ensure the safety and security of all participants."

So far, there has been no word on whether or not BiP's August 8 premiere date will be pushed back, but ABC has confirmed that it will still air this summer.