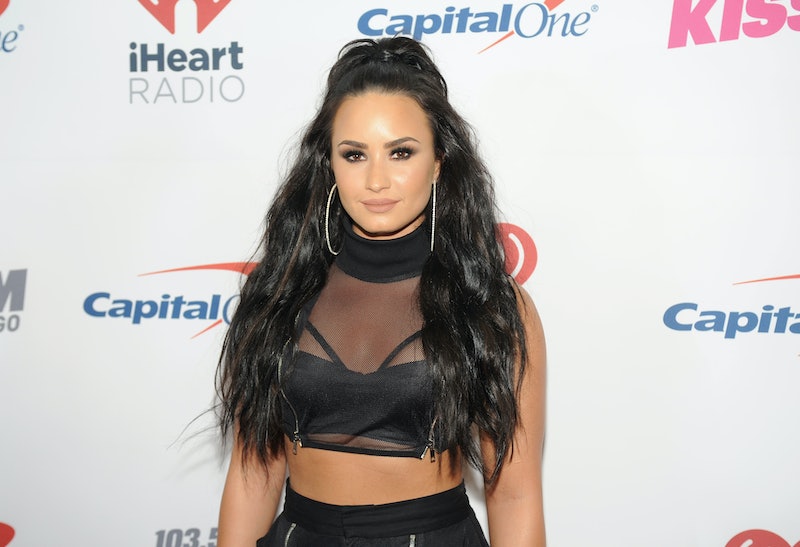 The saga of the masters continues, and yet another star has decided to publicly take a side. On the evening of Sunday, June 30, Demi Lovato defended Scooter Braun after Taylor Swift accused him of bullying her. The "Sorry Not Sorry" singer took to her Instagram Stories to share her opinion on the matter, sticking up for her new manager.

On Sunday morning, Swift fired off a lengthy post on Tumblr that addressed Braun's recent acquisition of her former record label, Big Machine. Big Machine has long-owned the rights to Swift's masters, and not only did she allege that she "pleaded for a chance to own [her] work" for several years to no avail, but she also called Braun's involvement in the deal her "worst case scenario."

She then went on to claim that Braun took part in "incessant, manipulative bullying" directed towards her at her "lowest point." Though Lovato did not specifically address the incidents to which Swift was referring (notably Swift's public feud with Kim Kardashian and Kanye West), she defended Braun.

"I have dealt with bad people in this industry and Scooter is not one of them," the star wrote in one of two posts on her Instagram Story. "He's a good man. Personally, I'm grateful he came into my life when he did," she explained. "Please stop 'dragging' people or bullying them. There's enough hate in this world as it is."

Lovato signed with Braun for management in May of this year, joining a renowned roster that includes Justin Bieber, Ariana Grande, and Dan + Shay. It's safe to assume that she probably knew Braun — or at least knew of him and his general reputation — long before their deal, though, seeing as how they've both been in a similar sect of the industry for quite some time.

Lovato continued to defend her new manager in a second Instagram Story post. "Y'all can come after me all you want but I'm always gonna stay loyal to my team," she wrote. "I value loyalty more than most people in this world and if my name is gonna be brought into conversations I'm gonna stand up for myself and the ones on my team."

Ever since Swift's Tumblr post was first published, stars and friends of both parties have thrown in their two cents on the drama. In addition to Lovato, Braun's wife, Yael, as well as Big Machine Label Group CEO, Scott Borchetta, have spoken in Braun's defense. Justin Bieber — whom Braun discovered and has managed for the entirety of his career — responded to Swift's claims in a lengthy Instagram post of his own, and claimed that, "Neither scooter or i have anything negative to say about you we truly want the best for you."

As for Swift's supporters, Cara Delevingne responded to Bieber's post by writing, in part, "I wish you spent less time sticking up for men and more time trying to understand women and respecting their valid reactions." Halsey sided with her as well, claiming that Swift, "deserves to own this painstaking labor of her heart."

This whole thing is starting to get a little messy, and will probably get worse before it gets better. No matter where your allegiances lie, though, it's time we all agree that bullying the opposition is not the answer.