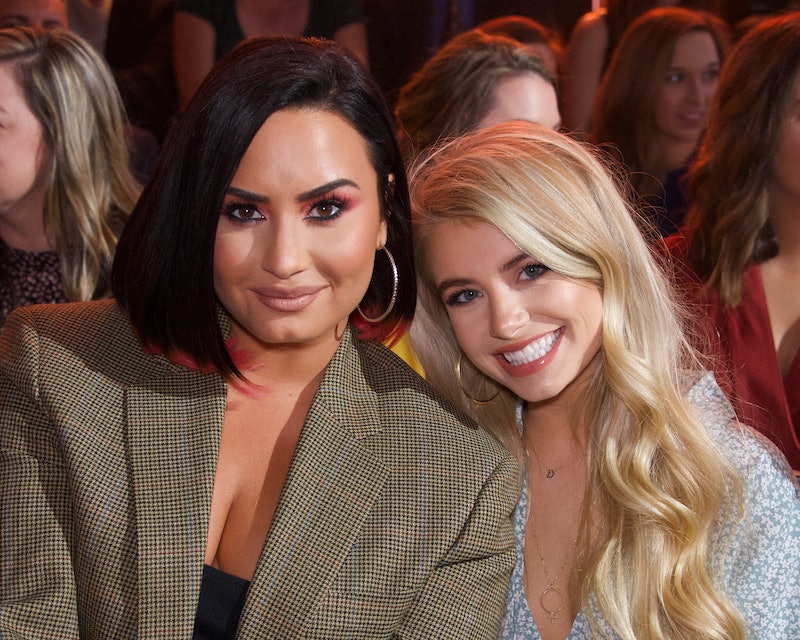 A lot of different celebs self-identify as members of the Bachelor Nation, but not many celebs have gotten in with the Bach crowd quite like Demi Lovato. Most recently, Demi Lovato and Demi Burnett supported Hannah Brown at Dancing With The Stars, cheering on the former Bachelorette with another familiar face from Bach Nation. And this special appearance came right after reports that the singer has been dating former Bachelorette contestant, Mike Johnson. At this point, she's basically a Bach alum herself.

On Monday, Sept. 30, in the third week of Dancing With The Stars, Hannah and her partner Alan Bersten did a rumba routine to the song "Hold On" by Wilson Phillips, from the movie Bridesmaids, according to the official YouTube channel. Hannah typically has friends in the audience, as do other contestants, and this week she had a full on cheering section. Not only were Lovato and her Bach BFF Demi in the audience, but they were also accompanied by fellow Bachelor alum Nick Viall and his close friend Rumer Willis.

Hannah's support crew were all posting up a storm on their Instagram stories, with Demi Burnett captioning a selfie with Lovato, "Demi squared does it again." Willis, meanwhile, posted a selfie of all of them as well, and she knows the DWTS ballroom all too well, as she won the Mirror Ball Trophy in her 2015 season.

Lovato also posted her encouragement for Hannah on her own Instagram Story, sharing a photo of the Bachelorette dancing with her partner, writing, "I had so much fun supporting @hannahbrown tonight at @dancingabc." She also took the opportunity to encourage fans to vote for her friend, writing, "Y'all vote for my girl every week!!!"

This isn't the first time Lovato has been spotted hanging with these Bachelor alums, either. After declaring her fangirl ways for Hannah B. and The Bachelorette this past season, the singer has become quick friends with Hannah. In response to Lovato being there to support her, Hannah told People that Lovato is "so great," adding that she's "just really thankful for her support through everything."

"She is always there for, ‘Hey, do you just want to come over and just hang out?'" Hannah added in her interview with People. “That’s what I need right now; just a friend that is supportive of and understanding of what like this new life has been." Lovato, who has been famous most of her life, has also been able to help Hannah transition to her new life as a celebrity. "She knows it on a much bigger level than I do, but she doesn’t care about that," Hannah said. "She needs friends just like we all do, and I need friends just like everyone does, and so it’s great to have somebody who can be a guidance of this new life and then just somebody who’s so loving and different."

It definitely sounds nice to have a friend like Lovato — whether you're competing on Dancing With The Stars every week, or not.