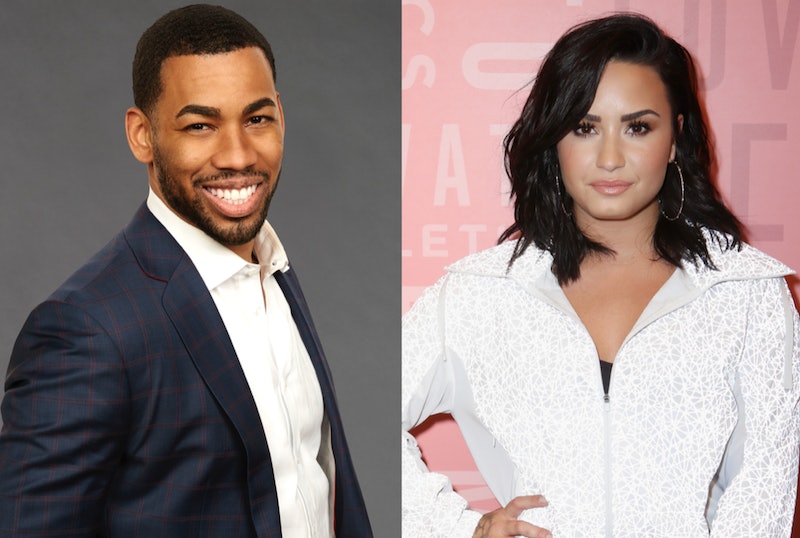 Another Bachelor Nation alum went out with another A-list celebrity. Mike Johnson and Demi Lovato went on a date, The Bachelorette alum confirmed to Entertainment Tonight on Wednesday. Reports that the Bachelor in Paradise cast member and the "Tell Me You Love Me" singer got together first popped up a few days ago, but this is the first statement from either of the two individuals in question.

"Demi Lovato and I went on a date. The woman is quite astounding and amazing. And that's all I'll say on that."

He did not say what they did on their actual date, but in a recent interview with E! News, he did share what his ideal date with Lovato might look like: "I'm gonna have some brownies, I'll get you chocolate chip cookies or something, and we feed each other, while listening to some dope a** music."

This connection has been in the works for a few months. As Us Weekly noted, Lovato made her feelings about Mike clear when she posted "Mike I accept your rose" on Instagram Stories while watching the July 1 episode of Hannah Brown’s season of The Bachelorette. And when a screengrab of Mike's post-Bachelorette tweet about wanting to know where his "future wife" was hiding made its way to IG, Lovato posted, "IM RIGHT HERE MIKE I'M RIGHT HERE BOO MY MOM ALREADY LOVES YOU TOO."

When Us Weekly mentioned Lovato’s posts to Mike at the Men Tell All taping a few weeks later, the former Bachelorette contender said he was “flirting with her too” and “would definitely take her out for an initial date.” Mike and Lovato’s recent flirty back-and-forth on the latter’s IG post caught the attention of fans. On Sept. 5, Mike responded to the photo Lovato posted of herself in a bikini, writing, “Look at me like that again” and “love yaself.” He also included the smirking face emoji and the celebratory hand raise emoji. She replied with the kissy face emoji and the emoji that’s sticking out its tongue and closing its eyes.

A little over a week after their IG interaction caught the internet's attention, multiple outlets reported the two had taken their connection offline. According to a Sept. 14 People report, a source claimed Mike and Lovato have “been talking privately for a bit and hanging out" and "having fun getting to know each other. That same day, Hollywood Life revealed a source claimed they went out on a date at LaScala in Beverly Hills, where Lovato "couldn’t stop laughing." And on Sept. 15, Entertainment Tonight reported a source claimed a second date may be on the table. ET's insider added, "Everything went well on the date. They had been messaging and then got in touch in real life through Hannah Brown."

Thanks to The Bachelorette, the internet, and Alabama Hannah, it looks like Lovato and Mike could be cool for the summer and beyond.