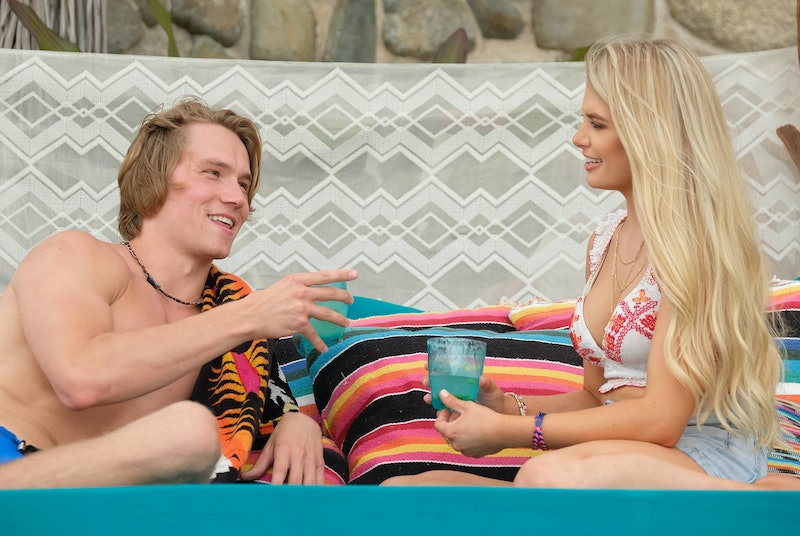 Bachelor Nation is stoked for some of the franchise's favorites to reunite in Mexico. They're already playing matchmaker from home and conspiring about villains, but they're particularly interested in Demi coming out as bisexual on Bachelor In Paradise. And for admitting to being in a relationship right up until filming. Well, kind of.

In her intro for the season, she sat down with the latest Bachelorette Hannah B. and told her she was seeing someone and "it happens to be a woman." She said that she's not into labels, per se, at the moment, but did say that her sexuality was fluid. She told Hannah that this woman had "the warmest energy," and she even said that they were "head over heels" for each other. But yet, there's no exclusivity, which rang a Jed Wyatt-sounding bell for some fans.

What are her intentions stepping into Paradise? Could she be misinterpreting her relationship? How does the other person feel? Some fans are confused, some are concerned, and others are just excited to see what happens. After all, not everyone is into monogamous relationships, and if Demi isn't, that's her call to make. Ultimately, she seems unsure about it all, which is why she decided Paradise was a good idea. She said it will show her how she wants to love and who she wants to love. Hopefully, she's right.

Of Course, Fans Have Opinions

Following the release of the Paradise trailer after Hannah B.'s Men Tell All, Demi shared a tweet declaring her sexuality. "Spoiler alert: I’m a queer queen," she wrote. Most of Bachelor Nation rallied around her in support, but it will be interesting to see how the contestants in Paradise react when she breaks the news to them. By the looks of the clip, emotions find their way into some of her conversations eventually.

"I just know that I love this girl," she says in the promo. "I'm just so happy that I found her, and I can definitely picture being with her for the rest of my life." It's unclear who exactly she's proclaiming this love for. It could be someone in Paradise, or it could be the woman she's said she's seeing outside of the show.

Regardless of what happens, fans are sure that Demi will prevail. She makes it obvious that she's her own biggest fan, which can help her get through anything. When she introduced herself, she even said she was from "Demi's season of The Bachelor," and fans are loving it.

One of the guys said, "I think you're hilarious," and she replied with, "Thanks. Me too!" Once again, fans applauded her confidence and self-love.

Although her situation is definitely unique and could end up throwing a wrench in Paradise, Demi isn't getting as much slack from the fandom as Jed did when his pre-Bachelorette relationship was revealed. That's most likely because Demi was upfront and honest about her position from the beginning, whereas Jed tried to hide his, and it backfired.

In the matter of just an hour of BiP, Demi has already imparted two lessons onto Bachelor Nation. Love yourself, and speak your truth. You know she's going to be doing both the whole time she's in Mexico, and beyond.