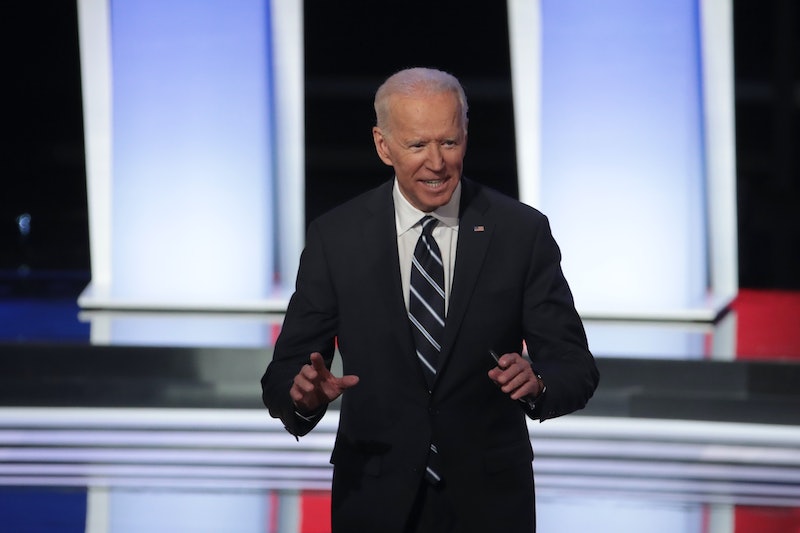 In this op-ed, Bustle senior features editor Gabrielle Moss looks at how Democrats didn't say "abortion" during this week's presidential primary debates and why it's crucial to do so.

It took a long time for abortion to come up during Wednesday's Democratic presidential debate. In fact, as the night neared its close, it seemed like no one was going to mention it at all. But in the debate's final few minutes, Sens. Kirsten Gillibrand and Kamala Harris both called out former Vice President Joe Biden on his track record with women's issues: Gillibrand brought up a 1981 op-ed in which Biden said mothers who worked outside the home were "avoiding responsibility," while Harris questioned Biden's track record supporting the Hyde Amendment, which bans federal funding for almost all abortions.

"Do you now say that you have evolved and you regret [supporting Hyde]?" Harris asked, referring to that fact that Biden supported the ban as recently as June 5, only reversing his stance after he came under significant fire from activists and other Democratic candidates. Biden stammered and claimed that he had only previously supported Hyde “because there was other access for those kinds of services provided privately.”

Biden's answer was a bit head-scratching. What did he mean by "other access"? Access to other sources of funding? Other clinics? But his euphemistic answer also brought up a much larger issue.

The phrase "those kinds of services" certainly raised some questions about Biden's level of comfort with discussing the basics of reproductive health. "Those kinds of services" sounds perilously similar to "that time of the month," a euphemism used to discuss periods, employed by people who think it's distasteful to actually talk about periods. Though Biden's website refers to the "constitutional right to an abortion," Biden's language at the debate implies that there's something inappropriate or impolite about discussing abortion publicly, even if you're pro-choice — a stance that feels radically out of touch in 2019.

But Biden and Harris' exchange points to something even more insidious. No candidate used the word "abortion" at all in this week's debates (the word was used in June's debates). During Wednesday's debate, Montana Gov. Steve Bullock described himself as "pro-choice," former Colorado Gov. John Hickenlooper spotlighted his state's expansion of "reproductive rights," and South Bend, Indiana Mayor Pete Buttigieg described protecting a "woman's right to choose" as a pressing issue. On Thursday, beyond Biden's "those kinds of services," Harris referred to abortion as "reproductive health care" when she questioned the former vice president about Hyde. That's a phrase that refers to a broader array of services, from abortion and birth control to Pap smears and IVF, rather than abortion specifically.

Any Democratic president taking office in 2020 would have to prioritize abortion rights if they wanted to prevent the total erosion of choice in the United States.

If Democratic candidates struggle to talk openly about abortion on national TV, how will they be able to fight to defend it? Abortion rights are currently under attack across the country, with this year alone seeing bans on abortion after six weeks — a window of time in which many people do not even yet know that they're pregnant — signed into law in Kentucky, Mississippi, Ohio, and Georgia. These laws aren't just restrictive, they are efforts by anti-abortion activists to take Roe v. Wade to the Supreme Court in an effort overturn it. Any Democratic president taking office in 2020 would have to prioritize abortion rights if they wanted to prevent the total erosion of choice in the United States. And the way it has been treated in this week's debates, as an afterthought or a word to dance around, doesn't make it feel like a priority.

Since Biden is the current Democratic front-runner, leading the next-most popular candidate, Sen. Bernie Sanders, by more than 10 points in recent polls, his ability to speak openly about abortion is especially important.

Pair the inability to say the word abortion with Biden's longtime support for Hyde and his recent, confusing reversal of that support, and it becomes difficult to imagine him spearheading a potential fight to preserve Roe. It's still early on in the Democratic campaigns, and a lot of things might change. But given the war on abortion rights in America, it's tough to picture someone who calls abortion "those kinds of services" as the person to secure a victory.