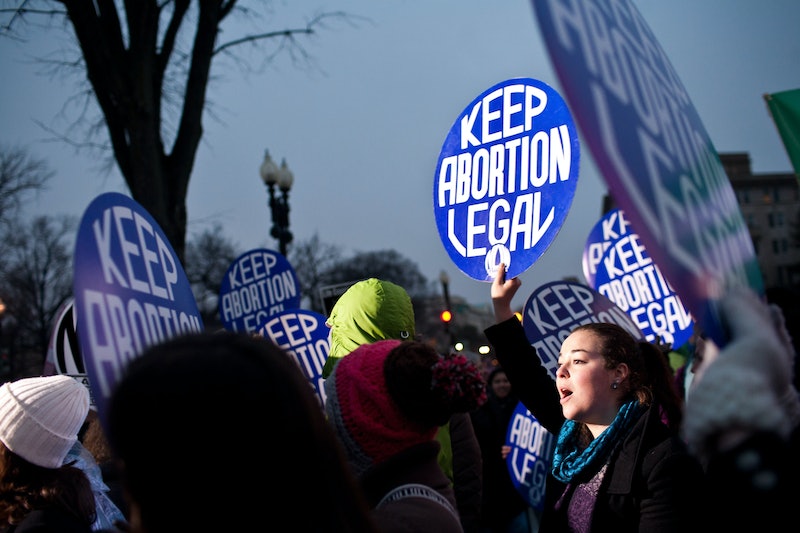 In this op-ed, Bustle Lifestyle Features Editor Gabrielle Moss explains why it's so disappointing that the Democratic debates glossed over abortion.

Thursday's Democratic debate had a lot to cover. There were less than 120 minutes to get through 10 different candidates' stances on everything from improving health care to developing a more humane immigration policy. At any political event this big and this important, you're going to have some surprises. And we did, from Sen. Kamala Harris elegantly taking former Vice President Joe Biden to task for working with segregationist politicians and opposing school busing, to Mayor Pete Buttigieg's admission that he failed his community of South Bend, Indiana, when it came to fighting police violence. But one unwelcome surprise was just how briefly the debate covered the issue of abortion rights.

In the second hour of the debate, Sen. Bernie Sanders was asked how he'd react if he won the presidency in an America where Roe v. Wade had been overturned. Sanders gave a considered answer, noting that he believes abortion is a constitutional right, that he'd only nominate pro-choice judges, and that he had a plan to prevent Roe from being overturned by rotating Supreme Court judges. When pressed by MSNBC's Rachel Maddow, he claimed he would guarantee a right to abortion through Medicare for All. Sen. Kirsten Gillibrand then began talking about her own record defending reproductive rights.

And then... it was over. A moderator announced that the topic of discussion would now be climate change. No one was else weighed in about their own reproductive rights policy. In a debate where candidates had no qualms about calling each other out, it was a bit surprising that no one even touched on the question of whether Sanders' Medicare for All solution would actually make abortion accessible if Roe were overturned.

Of course, all this likely wasn't intentional on the part of the moderators or the candidates. A 10-person debate is inherently chaotic, especially when it involves author Marianne Williamson riffing on the moon landing and conducting a "love war."

Thursday's candidates didn't seem to purposely gloss over the topic, but it's disappointing that so many of them seem to view discussing their plans to protect abortion rights as a mere afterthought. Although we know that every Democratic candidate is pro-choice, we don't know the details of all of their plans to defend Roe, much less to deal with the terrifying prospect of taking office in an America where Roe has been overturned.

And that prospect is becoming realer and realer as we speak. A number of restrictive abortion laws have been adopted this year in states like Georgia and Ohio. The anti-abortion advocates who promoted them hope they will be challenged all the way to the Supreme Court, potentially setting up the fall of Roe v. Wade. Even if Roe stands, many Americans still struggle to access abortion care: 90% of U.S. counties do not have an abortion provider, according to a 2014 Guttmacher Institute report.

A recent NPR/PBS Newshour/Marist poll found that 77% of Americans don't want to see Roe overturned, and consider a candidate's abortion rights stance the fifth most important aspect of their platform. Plus, a CNN/Des Moines Register/Mediacom poll of potential Democratic Iowa caucus voters found earlier this month that defending the right to abortion was the biggest platform "must have" for candidates. A plan to safeguard our abortion rights isn't boring, white noise policy. It's something voters are eager to hear.

People care about what the Democratic candidates have to say about abortion. We want to know more than the fact that they support the right to choose — we want to know how they plan to protect reproductive health care and how their policies will make abortion accessible to everyone, independent of where they live or how much money they have.

Abortion access determines the fate of countless Americans. We must not allow candidates to gloss over abortion policy just because there are better opportunities to score points on the debate stage.