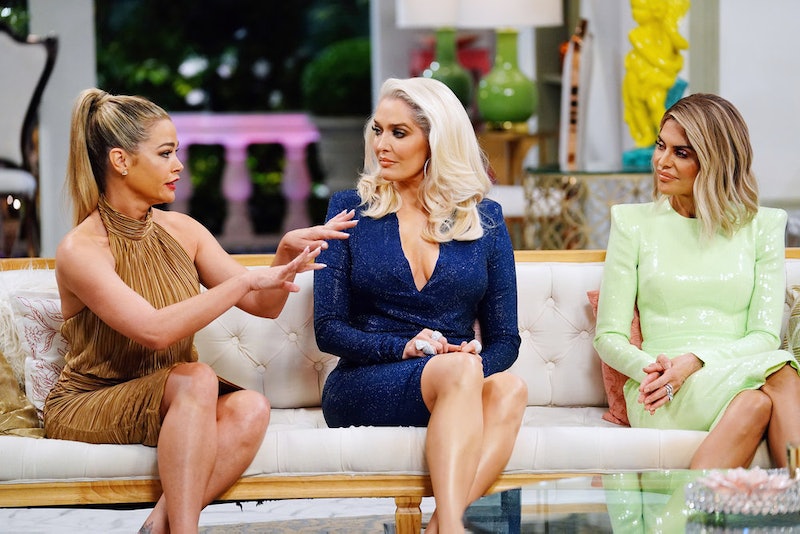 The dramatic catalyst for the current season of Real Housewives Of Beverly Hills was that a dog was adopted, then unadopted, and then re-homed, so it’s fair to say that not every fight on reality television starts as a huge thing. That said, it’s usually pretty easy to notice the slights or arguments that erupt into season-long plot lines. But in the case of Camille Grammer Meyer and Denise Richards, well, it’s harder to tell. Denise, who is a full-time Housewife, stayed mum on most things all season — until she had to tell the newly un-sainted Camille to back off. But why are Camille and Denise really fighting at the RHOBH reunion? This seems like it got blown out of proportion.

To start, both women are polar opposites. Denise is the most refreshing, go-with-the-flow Housewife possibly ever added to any of the Real Housewives franchises. She’s a delight who loves to wear jean shorts and doesn’t sweat the small stuff. This woman was married to Charlie Sheen. She knows from actual problems.

In the Season 11 finale of Real Housewives Of Beverly Hills, Denise exploded at Camille because Denise was trying to keep the peace between Camille and the other Housewives on the show. But Camille stepped to her, and Denise told her to “back the f*ck off” because it was “inappropriate” for Camille to bring up Dorit and PK’s allegedly questionable finances. Cheers to that. But that’s not where this ends.

On the first round of the Real Housewives Of Beverly Hills Season 11 reunion, it seemed like Camille and Denise were pit against each other specifically on the topic of divorces and spousal support. Per Radar Online, Camille got a huge settlement after she divorced Kelsey Grammer. Denise mentioned on RHOBH that she could have taken half of Charlie Sheen’s money, given that California is a community property state, but she didn’t because she wasn’t “greedy.”

Andy Cohen’s questions to Camille right after made it seem like Denise was judging Camille for taking her ex-husband’s money, and Camille said that she “worked hard” for her money. In her Bravo blog, Camille insisted that she wasn’t throwing shade. “My comment about working and not just sitting around eating Bon Bon's was to Andy and not directed toward Denise,” she wrote. “I am confident that she received what the law provides. We were both divorced in the State of California.”

Camille is the queen of throwing shade, so it’s really, truly hard to tell if she was being mean to Denise by telling Denise she didn’t follow her divorce or if she really didn’t pay attention. In behind-the-scenes footage, Denise mentions to Teddi that maybe Camille is just an unhappy person, and yeah, that could be the case.

When it boils down to it, Andy’s questions seemed leading and pointed to make it seem like Denise and Camille are at war when it doesn’t seem true.

Sure, these women are not BFFs — it’s not like they’re posting pics of each other all over Instagram or anything like that — but Camille has bigger fish to fry than snide remarks. She wants war with the rest of the women, and it seems as though this disagreement with Denise is nothing more than editing and a mere moment in a much longer reunion show. Nothing to see here, folks!