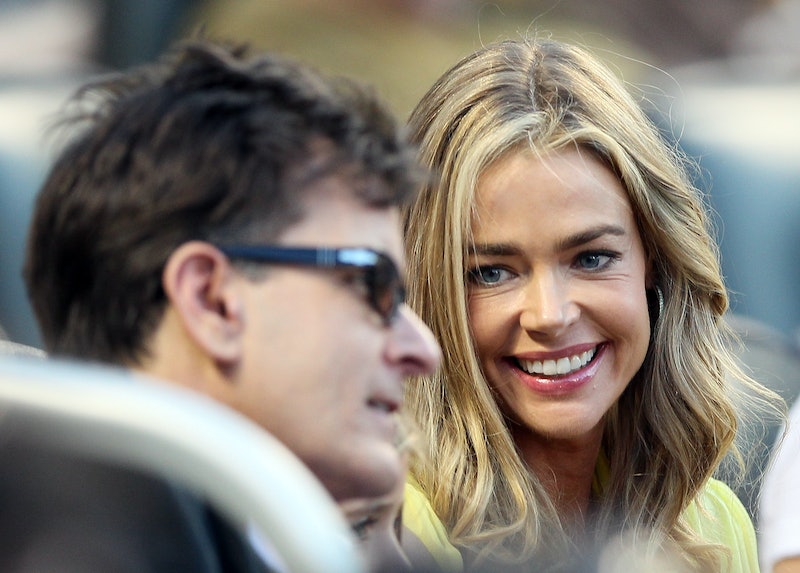 The only name that fans have heard more than Lucy Lucy Apple Juice this season is Charlie Sheen. He is Denise Richards' ex-husband and the father of her daughters Sami and Lola. The two of them seem to be on great terms these days, so does this mean that Charlie Sheen will appear on RHOBH? It seemed like a possibility back in an August 2018 interview with The Blast when Charlie predicted, "I’m sure if they’re rolling and I pull up to drop off one of the girls, then I’ll be on it."

So far, that hasn't happened, but Charlie did sort of appear during the Feb. 19 episode. He chimed in via speaker phone when Denise and 14-year-old daughter Sami were debating if she could attend the homecoming dance. Denise was not on board with the idea, but Charlie told their daughter, "I'll trust your judgment if you think it's the right person to go with."

Denise also revealed that she invited Charlie to her wedding. She even joked around about him walking her down the article and the possibility of him bringing a prostitute as his date. Sadly, neither of those things actually happened, although the wedding was hilarious without Charlie's presence.

A non-speaker phone appearance just doesn't seem to be in the cards for this season, unless Charlie (and production) have fooled us all. In a February interview with Extra, Charlie confirmed, "You’re gonna see the girls," which we all know by now. And this is actually a big deal in the Real Housewives world. Not all Housewives get to have their kids on the show. Orange County Housewife Tamra Judge's ex-husband Simon Barney has prevented their children from being on the show, for example.

It's nice that Charlie gave his blessing for the girls to appear, but doesn't seem down to do so himself. In that same Extra interview, Charlie declared, "I don’t appear on shows I don’t watch." That's fair. Even though he is Charlie Sheen, a man who has been through a whole lot, Real Housewives of Beverly Hills can get pretty intense. It is probably not the best call for anyone to go on that show without some preparation.

Believe it or not, it actually does seem like Charlie might be open to watching Real Housewives of Beverly Hills. In August, Charlie told Extra that his ex's casting was "fabulous." He even remarked, "I guess I will have to tune in now." This is season has been a pretty juicy one. Maybe he heard about all of the dog drama and tuned in for an episode or two.

It might seem a little odd for Denise's ex to appear on the show, but it really isn't that unusual in the Real Housewives franchise. Cynthia Bailey's ex-husband Peter Thomas appeared on Real Housewives of Atlanta many times throughout the years after they split up. He even went on one of the cast vacations when he and Cynthia were no longer together.

It would actually be a very normal move for Charlie to appear on Real Housewives of Beverly Hills. Maybe for Season 10.