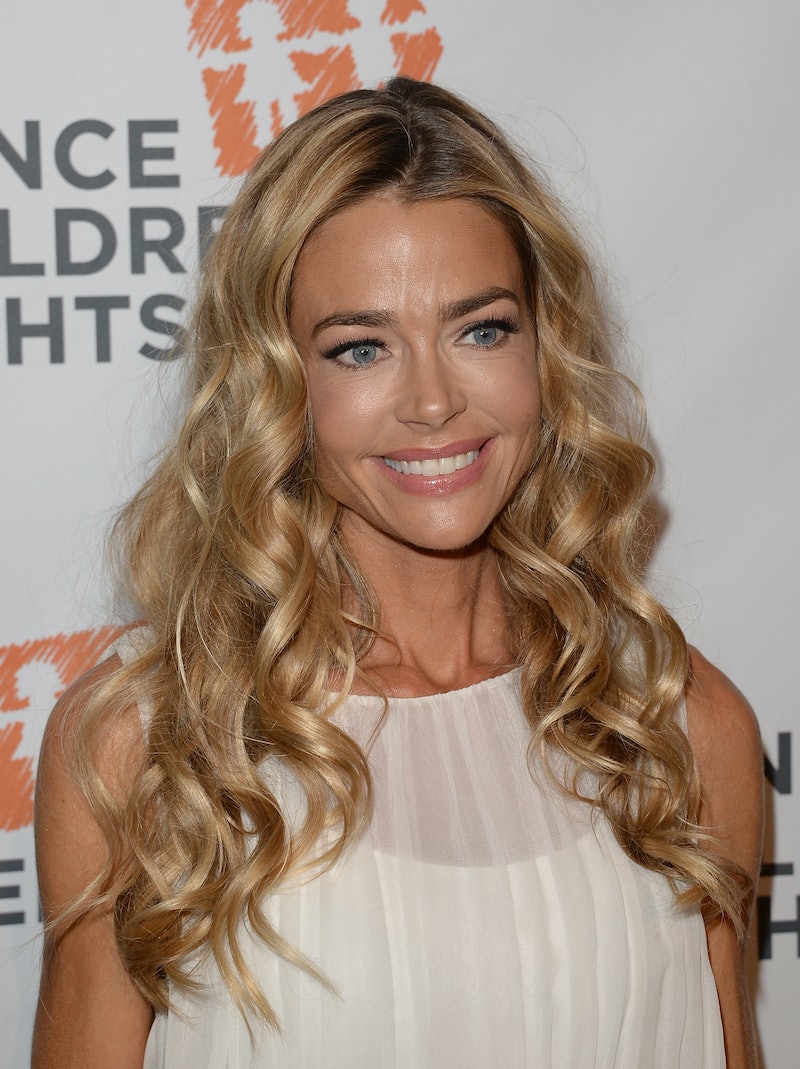 Well, that was fast. Just three days after her engagement was announced, Denise Richards reportedly married Aaron Phypers, as reported by E!. That news is exciting all on its own, but according to E!, the Real Housewives of Beverly Hills cameras were rolling to capture her big day. That's right, this season of RHOBH might just feature a wedding.

It’s being reported that Richards and Phypers exchanged their vows during an intimate beach ceremony on Saturday, Sept. 9, in Malibu — keeping with their original plans to keep things “small” on their big day. When dishing on what was then considered to be the potential nuptial plans, an insider told People recently that not throwing a huge bash would be completely intentional, as "they've both done this before and this time just want to exchange vows in front of the people who are most important."

Oh, but the nitty gritty details sound so magical. E! reports that Richards donned a natural glow and stunning strapless gown with embroidered flowers, of which the designer, Mark Zunino, reportedly had just 24-hours to prepare. And for Phypers' attire, the actor reportedly rocked a white button-down shirt and dark denim. Richards’ Real Housewives’ castmate and close friend Rebecca Romijn, as well as husband, Jerry O'Connell were said to be in attendance, according to E!, as were Lisa Vanderpump and Camille Grammer. It sounds like it was a wonderful time, and lucky for fans, they’ll seemingly have a front row seat to all of the action during RHOBH Season 9.

Saturday’s event marks the second marriage for both of the partners, with Phypers recently finalizing his divorce from Nicollette Sheridan after six months of marriage and nearly two years of separation. According to reports, Richards and Phypers have been romantically linked since December 2017, and have just been waiting for Phypers' official divorce before walking down the aisle themselves.

Sure, with an engagement announcement happening just 72-hours prior, it totally feels like a whirlwind romance. While dishing about the couple’s wedding plans to People recently, however, an insider said "the engagement has been a long time coming."

"He moved on from his past relationship a long time ago, and marrying Denise is a welcome new chapter for both of them in different but equally significant ways," People's source continued. "They’re just ready to start their married life together." And Saturday’s ceremony totally proves this to be true.

A wedding guest shared with E! that Phypers and Richards "seem very much in love." And when it comes to sealing the deal with overwhelming adorable amounts of PDA, the newlyweds totally have that on lock too. Attendees at the wedding shared with E! that "they kissed for a long time at the end" of saying "I do," and throughout the duration of the event, "they were nuzzling their noses and kissing over and over."

As if you haven’t been keeping up with the ins and outs of Richards and Phypers journey to the altar on social media already, fans will get even more up close and personal with the couple as Richards enters the RHOBH fold this upcoming season — set to premiere sometime within the latter half of 2018. But until then, just knowing that the pair followed their hearts all the way down the aisle will have to tide you over.