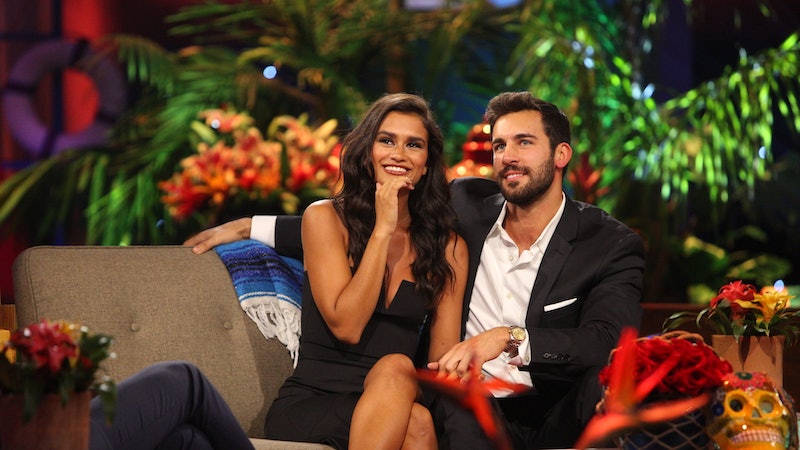 The last time Bachelor Nation saw Derek Peth on reality TV, he got engaged to Taylor Nolan on Season 4 of Bachelor in Paradise, but the couple broke up later. He will be back on the show for Season 6, looking for love again, but will his ex tune in? Admittedly, Derek's Bachelor in Paradise return has Taylor "curious" about whether or not she will watch this summer.

According to an article from E! News, Taylor opened up about this during an episode of her podcast Let's Talk About It With Taylor Nolan. She discussed her ex's return to reality TV with Vanessa Grimaldi, another person who is familiar with a post-Bachelor breakup. Vanessa got engaged on Nick Viall's season of The Bachelor, but Vanessa and Nick later broke off their engagement.

Vanessa brought up the topic and asked Taylor if she planned on tuning in this season. Before the Season 6 cast was announced, Taylor was interested in watching since she is "several seasons removed now." However, once she found out her ex-fiancé would be on the show, her feelings changed.

She told Vanessa, "And then I was like, you know, maybe [I'll watch] next season." Nevertheless, it doesn't seem like Taylor has definitively ruled out watching BIP Season 6. Taylor confessed to Vanessa,

"I mean, I won't lie, part of me is definitely curious to watch. The other part of me feels like I don't know if it's a smart decision to invite that stress and anxiety back in my life, because it's not just this fun form of entertainment, it's watching someone that I was in deep relation with and tried really hard with and didn't work out."

Those are some very valid thoughts. Who wants to watch a TV show about an ex's pursuit of love? Not most people. That's for sure.

Taylor went on to explain, "I'm going to be filled with so many thoughts and feelings if I watch, that part of me doesn't want to be fully consumed by that. So, I feel like I shouldn't." Again, that's very valid. Why would she put herself through that if she doesn't feel like she would be able to handle it well?

Not only that, but it would actually take some effort for her to watch the show. She can't just turn on the TV to watch live with everyone else. The reality TV alum revealed, "I also don't have cable so it's not like I can just turn it on. I would have to intentionally go to Hulu and watch it on Hulu." And again, why would she want to go out of the way to watch her ex possibly fall in love with another woman?

Or even if Derek doesn't find love and actually finds some heartache instead, that would be difficult to watch at all. At another point in the podcast, Taylor and Vanessa discussed Derek crying in a scene from the trailer. Taylor confessed, "That cry was so familiar."

Then she remarked, "It's so strange. It takes me right back to that." She also said, "I'm sure it was very emotional for him just to be there. let alone to try to pursue a relationship or something." Based on that trailer, it definitely seems like things got emotional for Derek.

And it seems like without watching a single episode, Derek's return to reality TV might be emotional for Taylor. According to Us Weekly, Taylor admitted during the podcast that a lot of people have asked her about this.

She said, "It definitely feels overwhelming knowing that people have already asked me, like, ‘How do you feel about him going on? Are you gonna watch?’ And I know that those questions will only continue and grow in number."

Unfortunately, that's just how Bachelor Nation works. Taylor and Derek announced their split in June 2018, yet they will always be associated with each other publicly, even if the conversation is about them dating other people.

No one can blame Taylor if she doesn't end up watching this season of BIP. At the same time, there would be nothing wrong if she was curiosu and tuned in anyway, or even if she just watched a clip or two. She may be a few seasons removed from reality TV dating, but she is bound to be a part of the conversation now that Derek is back in the game, at least during the early episodes of the season.