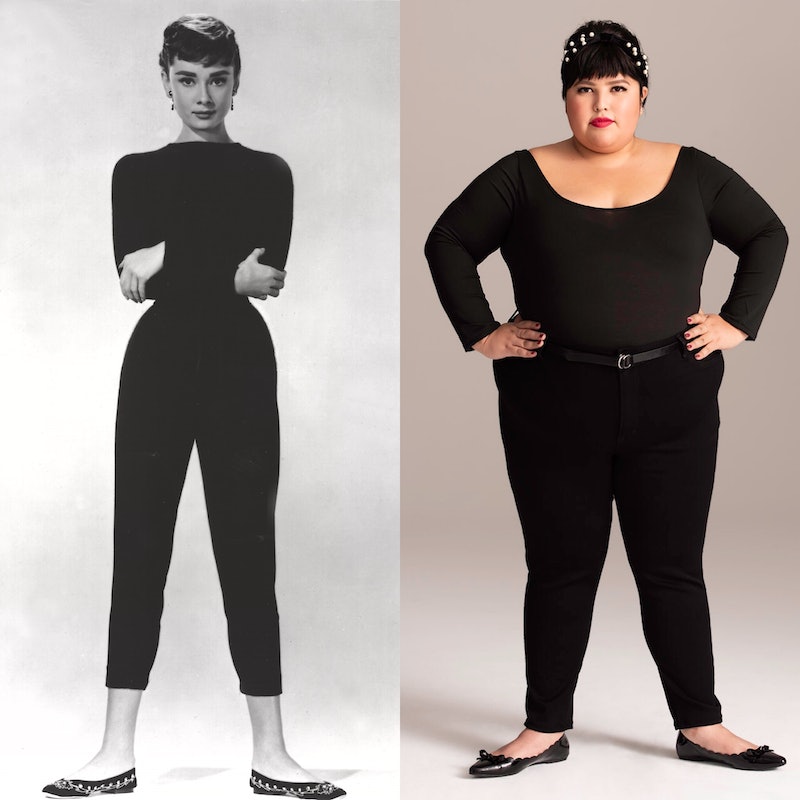 There's a lack of plus size representation in the fashion industry. That's not exactly a secret. Now, Dia & Co's We Are All Icons Campaign is working to change that by recreating famous denim ads with plus women. Honestly, the images are so good.

According to Dia & Co, women who are size 14 and up are actually 67 percent of the population. Despite this, plus women only make up 3 percent of images in the media. That's where Dia & Co comes in. The plus size styling company's new campaign is all about creating more inclusive, diverse images within in fashion and dismissing the notion that only straight bodies can be deemed iconic in the world of fashion imagery.

The company's campaign has chosen to specifically focus on iconic images surrounding denim because, much like the bodies of women size 14 and above, denim is one of the most prevalent style necessities just as 14 and above bodies are the most common. Dia & Co explains in a press release, "Jeans are a pain point for plenty of women, which is only amplified among plus women. Plus women deserve to participate, rather than being shut out of this staple of the American wardrobe. It was important to us to showcase the fit of Dia denim and the bodies for which we design."

The new images from Dia & Co, like the Audrey Hepburn-inspired photo above, all center around iconic moments when people wore denim. The campaign ranges from Hepburn to icons like Cindy Crawford and her denim shorts in her classic Pepsi commercial.

Dia & Co CEO Nadia Boujarwah explains the campaign's importance citing the size as a way to keep plus women hidden from fashion world. She explains to Bustle, "At Dia&Co, we know that every woman can be iconic. Often, size is used as a barrier to keep plus women out of the conversation and hidden from the spotlight. We wholly reject that notion. Representation will always matter, and our mission with this campaign is to propel these images into the mainstream, making space and giving voice to generations of plus women."

The campaign images, while incredible thanks to their centering of plus bodies, are more than just photos. They're in conjunction with Dia & Co's launch of their new denim style guide. The styling company is perfectly aware of the issues facing plus women when it comes to shopping denim. From ill fitting waists to navigating multiple types of fits, denim can be difficult for all bodies. Dia & Co's new styling guide is meant to help plus women fit the perfect denim style for them.

The new We Are All Iconic campaign isn't exactly Dia & Co's first foray into working to make plus bodies visible. In Feb. 2017, the styling company their #movefashionforward campaign, a project that provided financial support to designers who created for plus women. Later that summer, the brand encouraged customers to show off their arms with the hashtag #DiaARMy.

Now, Dia & Co's latest campaign is here to prove that every body is iconic and plus women deserve to be seen in the fashion space. If you want to have your own iconic moment, head over to the Dia & Co website now and check out their denim style guide.